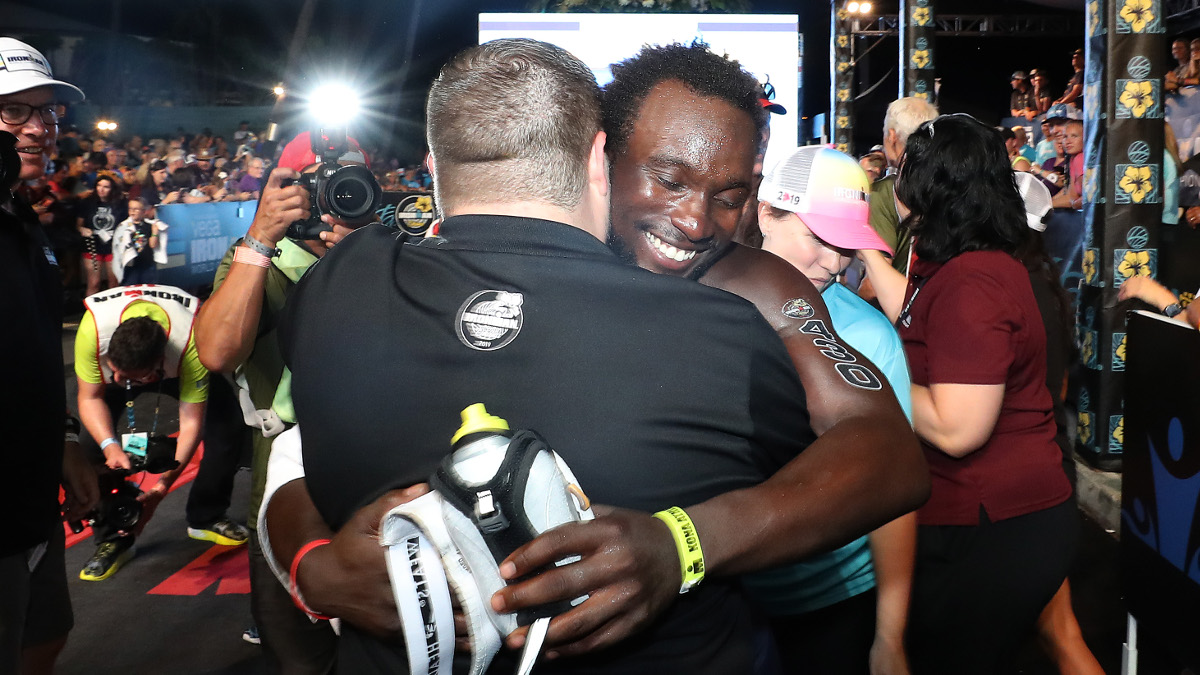 KAILUA-KONA, Hawaiʻi - Images capture the IRONMAN's inspiring athletes, who are sharing their stories of overcoming adversity and empowering others.

(BIVN) – Although the professional athletes are the first to complete the 140.6-mile IRONMAN World Championship journey in Kona, some of the most dramatic finishes are those that take place much later in the day, often just before the race deadline.

Here are ten images, captured by the hardworking event photographers on Saturday, that tell inspiring stories of accomplishment in the face of adversity. Words and photos courtesy the IRONMAN media team. 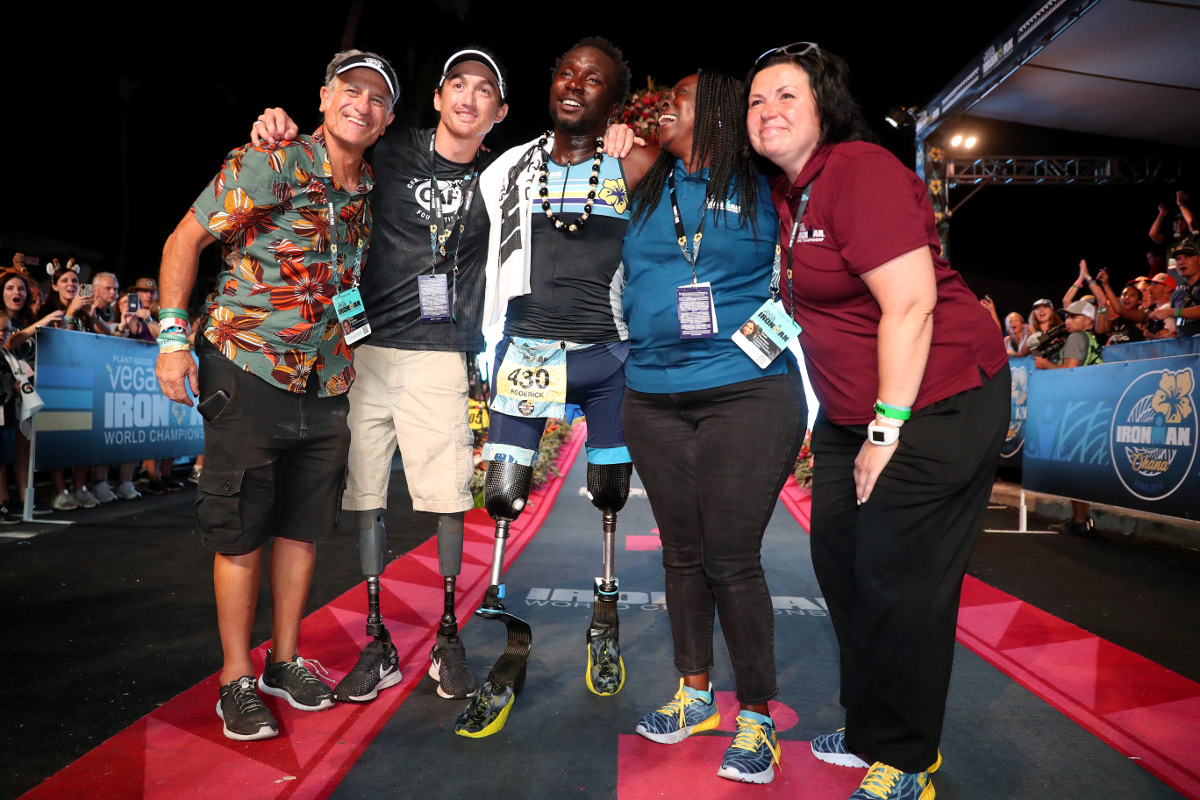 Roderick Sewell (C) celebrates with friends and family after he finishes the Ironman World Championships on October 12, 2019 in Kailua Kona, Hawaiʻi. (Photo by Tom Pennington/Getty Images for IRONMAN)

ANYTHING IS POSSIBLE: Roderick Sewell was born with severe leg deformities that would prevent him from walking. Roderick’s mother made the difficult decision to have both of his legs amputated above the knee before his second birthday. Despite moving from shelter to shelter, a seven-year-old Roderick’s pure determination and strong support from Challenged Athletes Foundation (CAF) led him to pursue athletic goals, starting with handcycling, and then running track, playing basketball, and swimming. Roderick went from homelessness to accomplishing many “firsts” in his family: from the first to graduate college, to bringing home a Gold and a Bronze medal from the 2014 Pan Pacific Para Swimming Championships. On Saturday, Roderick added another first, the first bi-lateral above knee amputee to finish the IRONMAN® World Championship on prosthetic legs. He is also the first American bi-lateral above knee amputee to finish the IRONMAN World Championship. 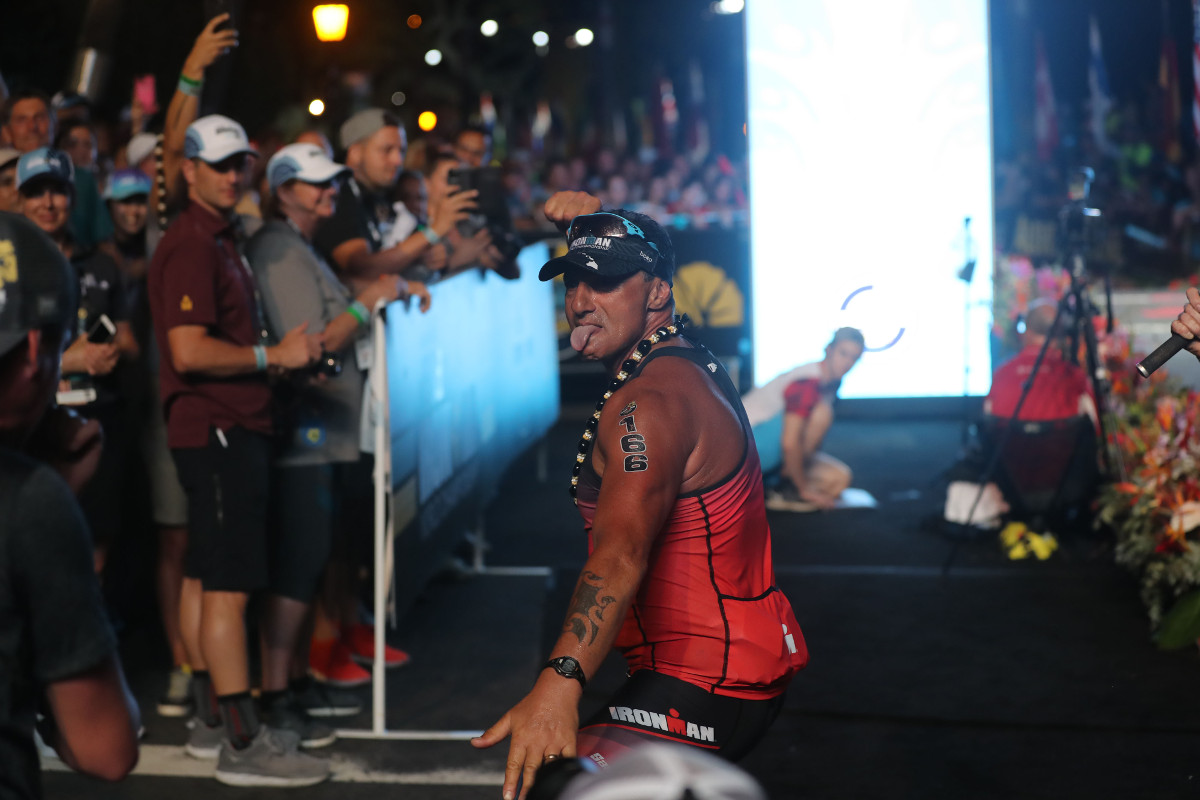 IRONMĀORI: Since 2009, [New Zealander Wayne Skipworth] has run IRONMĀORI, an initiative and club set up to improve health and fitness amongst the Maori community. Wayne and IRONMĀORI host events and community health projects including cycle rides, swimming and spin classes that have positively impacted countless lives. Wayne has also completed nine IRONMAN New Zealand triathlons and continue to reconnect the strong bond of Hawaiʻi and New Zealand culture through the 2020 IRONMAN 70.3 World Championship in Taupō, New Zealand. 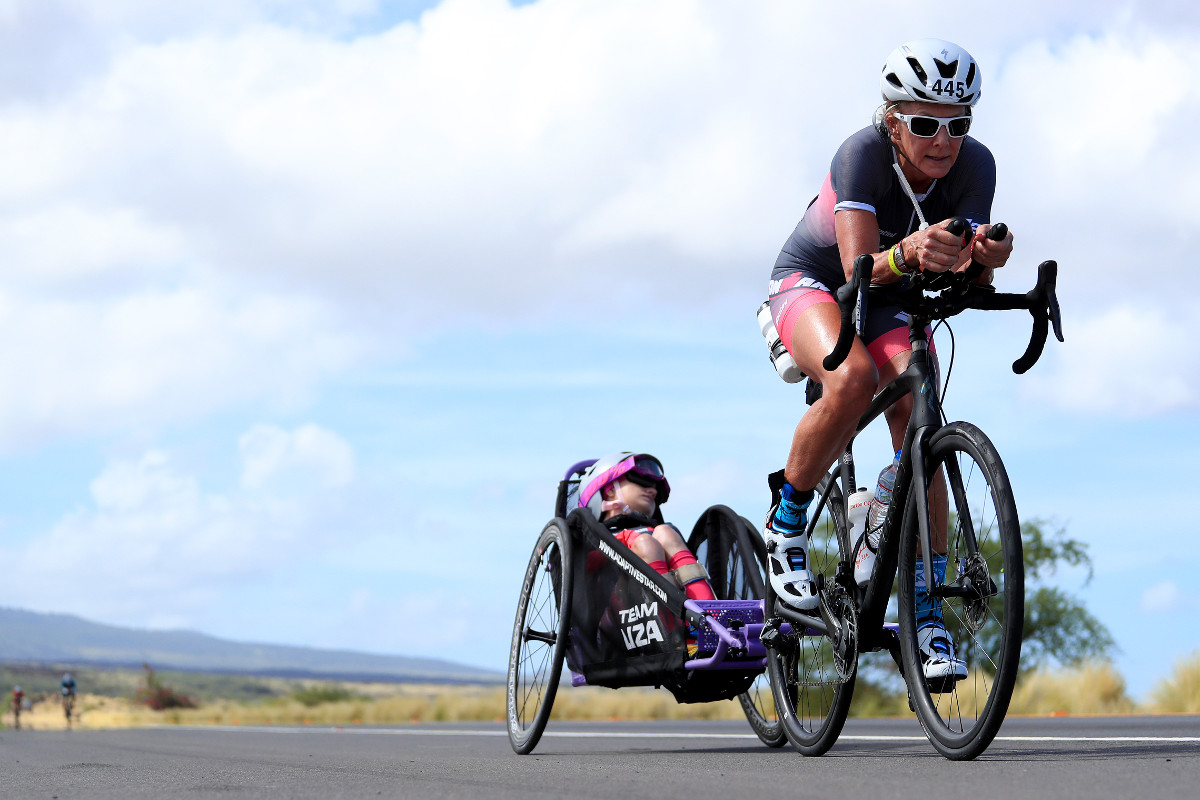 TEAM LIZA: Beth Liza was a single mom of three when she and her children were in a severe car accident 14 years ago. Her youngest child, Liza, then 6, endured a blow to the head that left her with a traumatic brain injury. Today, Liza, 23, is non-verbal and unable to walk. Thanks to her mom, Liza now travels the country, swimming, biking, running and even climbing mountains as they compete together as an inspirational mother-daughter duo. 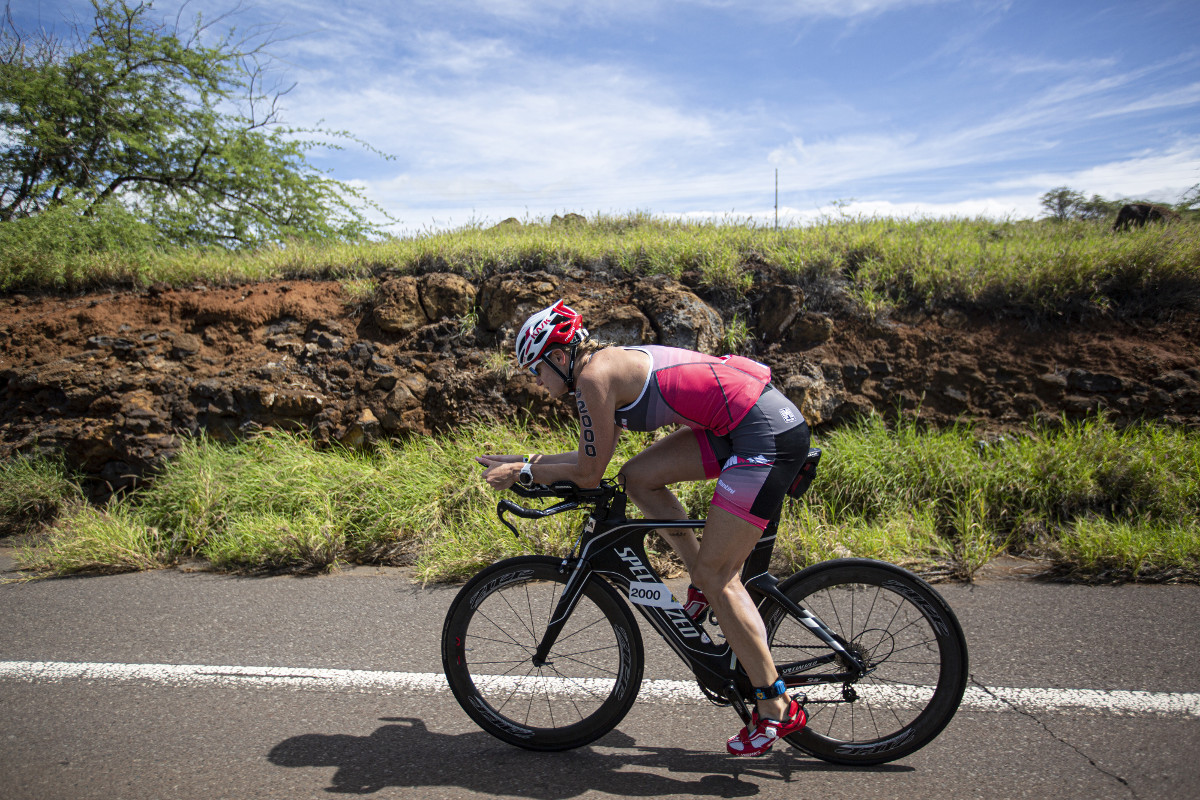 PROVING THEM WRONG: At age 38, Lisa Tecklenburg was already a successful business executive and accomplished IRONMAN triathlete, when she learned she had advanced-stage breast cancer. She was told she’d never get to swim again, taking away her chances of continuing as an IRONMAN competitor. Despite the traumatic news, she decided that she would prove everyone wrong. After months of surgeries and rounds of chemo, she was declared cancer-free, got back to training and doing what she loves to do. On April 27, 2019, Lisa completed her fastest IRONMAN triathlon ever, qualified for Kona, and proved everyone wrong. On October 12, 2019, Lisa then proved them wrong once again when she completed her dream of finishing the Vega IRONMAN World Championship. 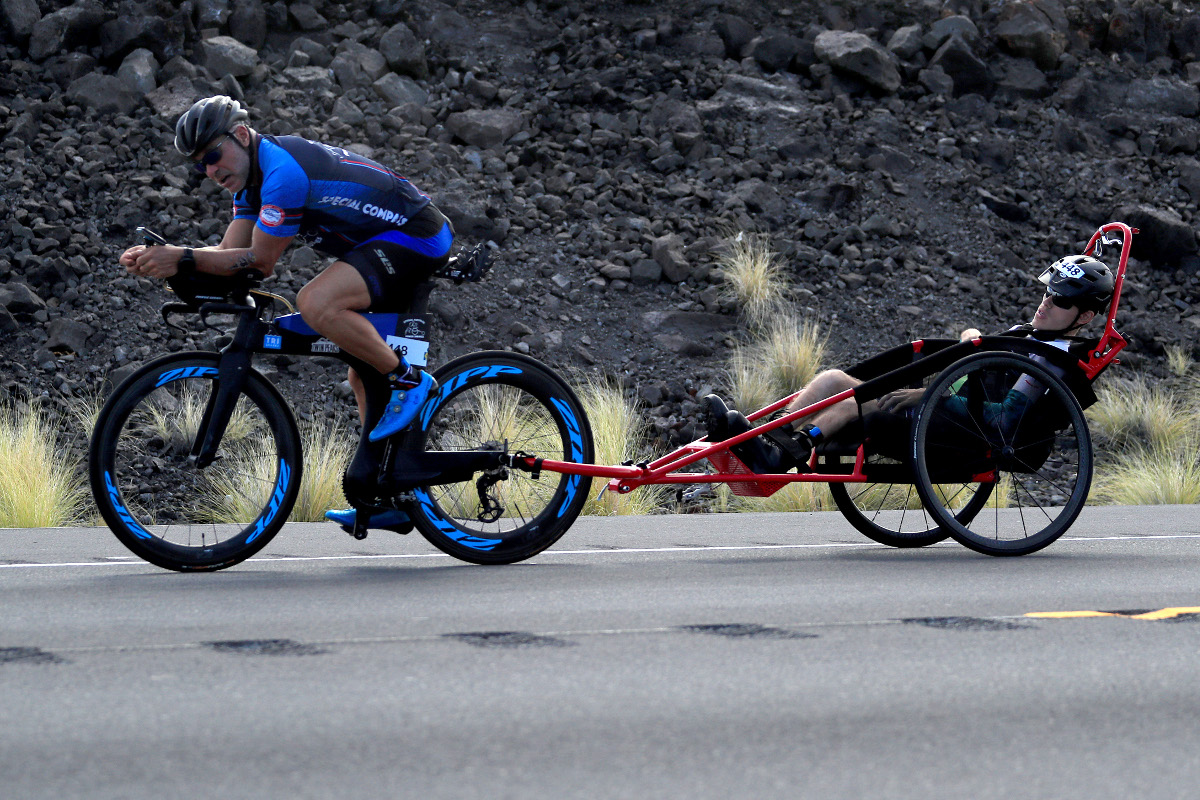 Jim Sayih and Michael Sayih of the United States compete in the Ironman World Championships on October 12, 2019 in Kailua Kona, Hawaii. (Photo by Tom Pennington/Getty Images for IRONMAN)

JIM AND MICHAEL: Jim Sayih has been racing with his son, Michael, since he was 5 years old. Although Michael was diagnosed with cerebral palsy as a child, it has not stopped the pair from taking on marathons and triathlons. Jim Sayih is the Founder and Executive Director of Special Compass, which he created in 2015 to include adaptive athletes and persons of any disability in all sporting events. 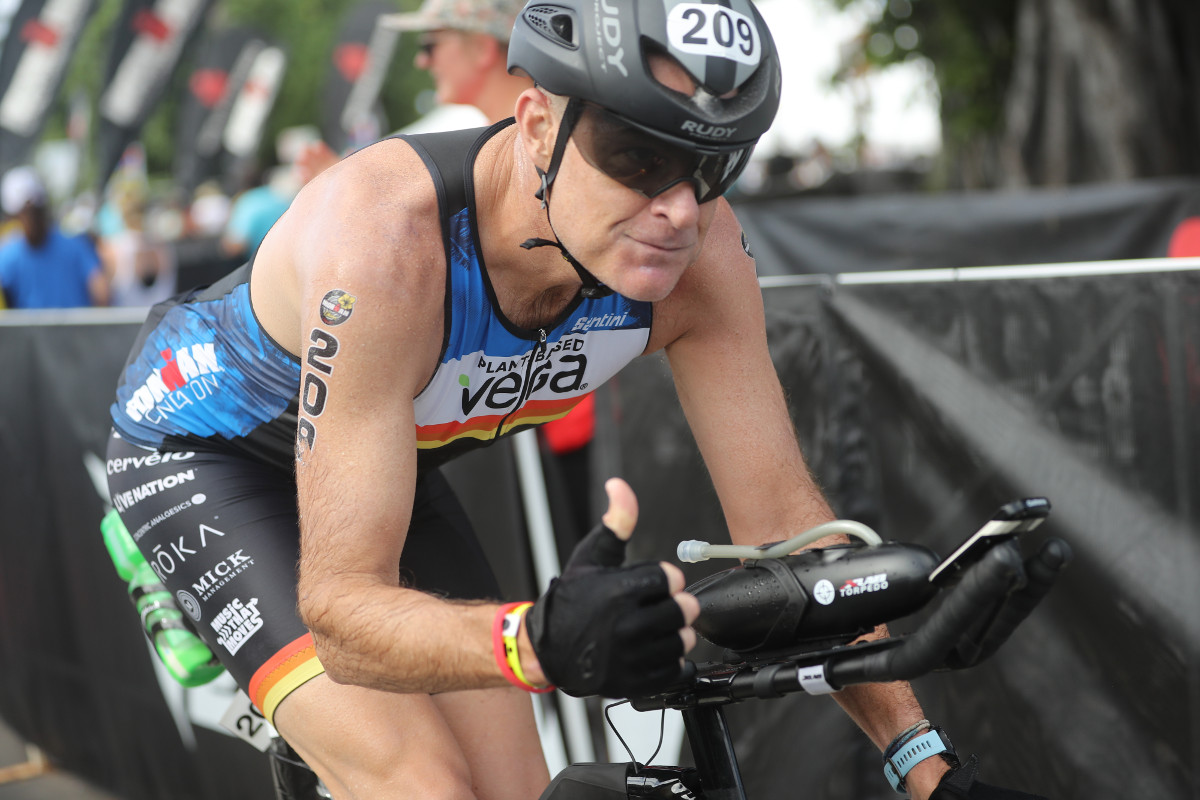 Michael McDonald mounts his bike and prepares to head out onto the 112-mile Ventum Bike Course during the 2019 Vega IRONMAN World Championship. (Photo Credit: Tony Svensson/IRONMAN)

MAKING A DIFFERENCE: Michael McDonald… has raised nearly $400,000 for MusiCares and the IRONMAN Foundation. Michael is the founder of the music management company, Mick Management and Chairman Emeritus of the nonprofit, MusiCares, which he credits with saving his life. While working as a tour manager, McDonald struggled with addiction and spent many mornings hungover, watching broadcasts of the IRONMAN World Championship with “lonely envy.” This year, McDonald turned 50 and marks his 20th year of sobriety. He completed his journey in 12:42:22. 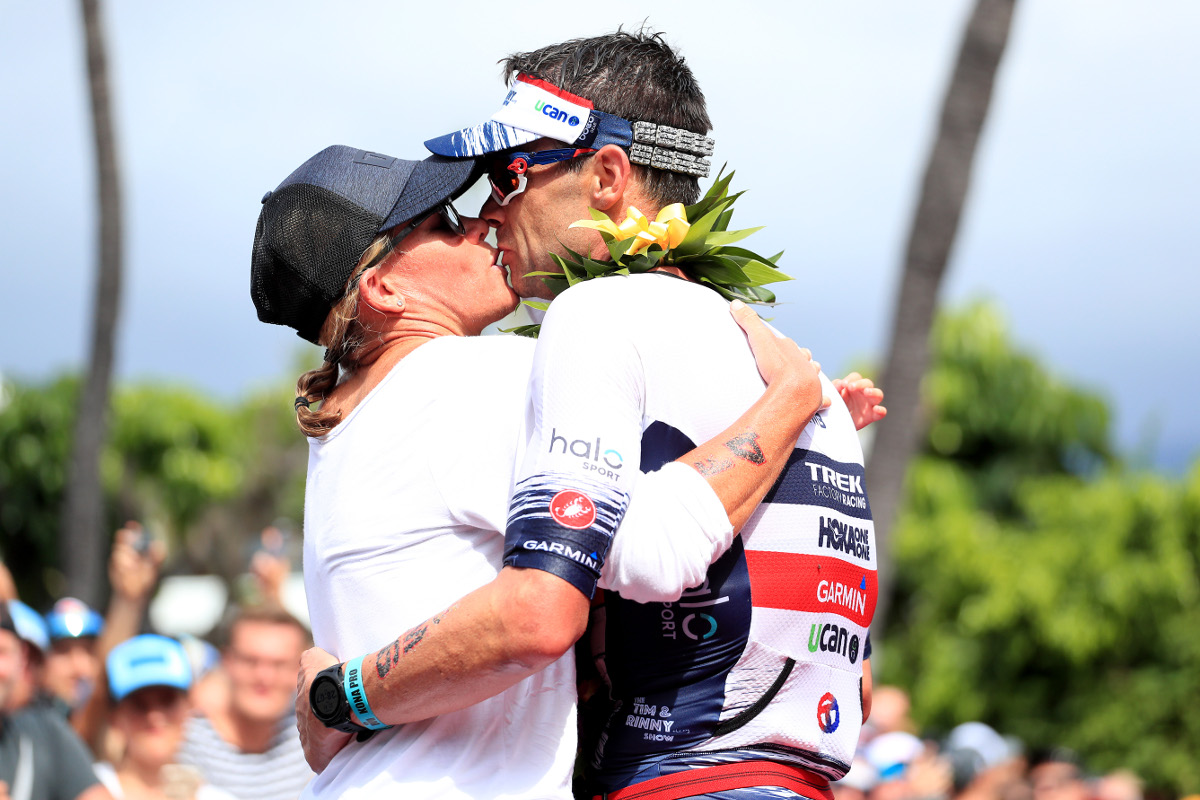 Tim O’Donnell of the United States celebrates after his second place finish with his wife Mirinda Carfrae in the Ironman World Championships on October 12, 2019 in Kailua Kona, Hawaii. (Photo by Tom Pennington / Getty Images for IRONMAN) 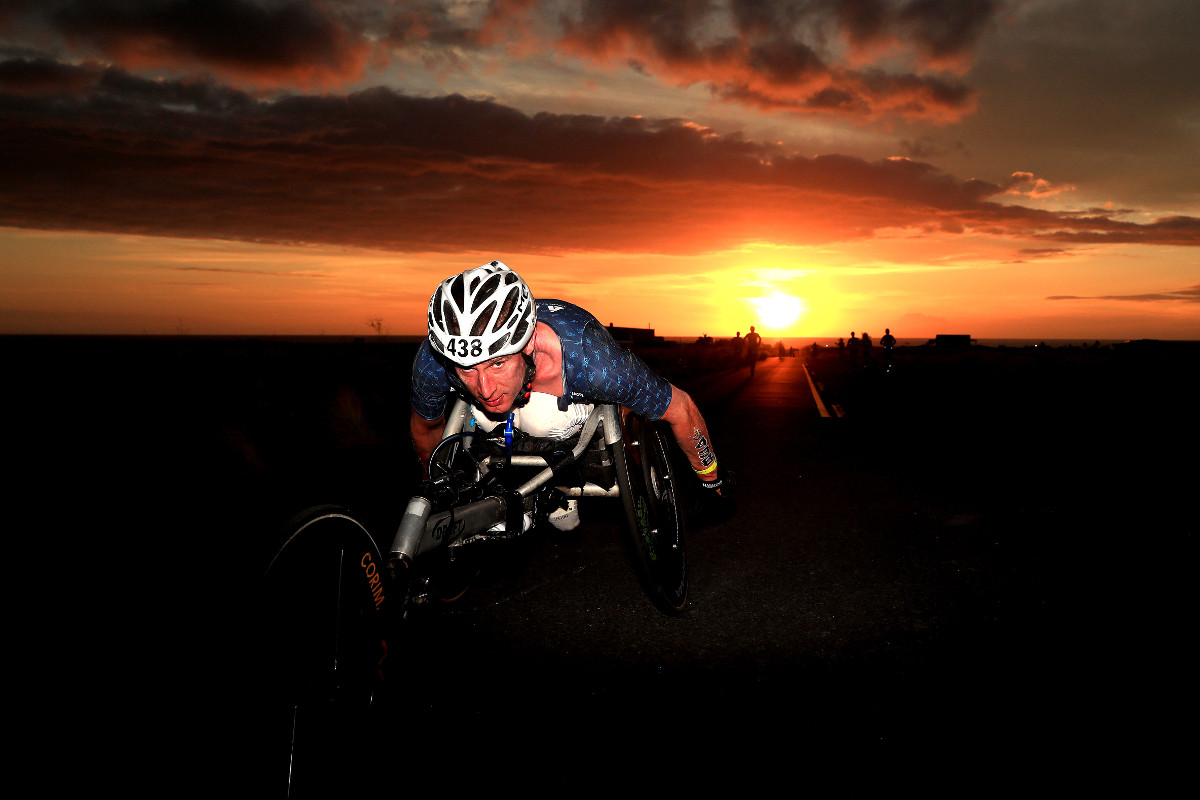 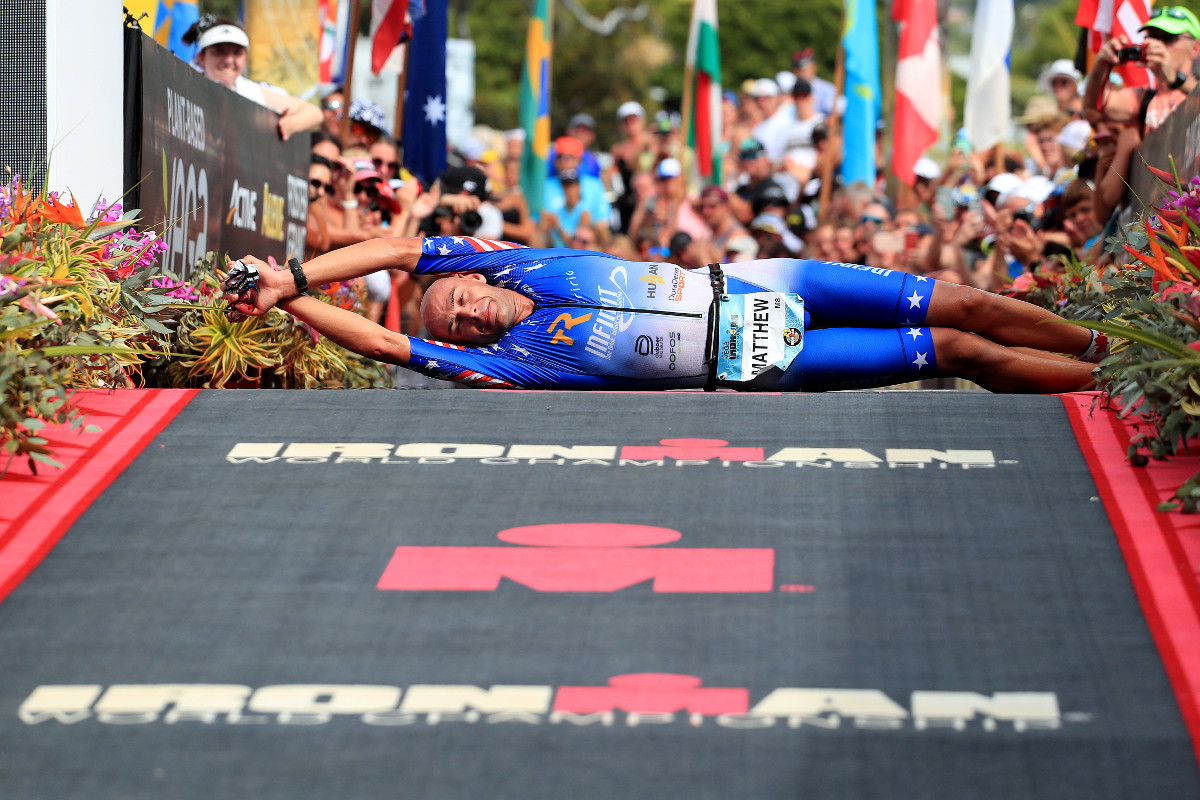 BLAZEMAN ROLL: Matt Russell (USA) crosses the finish line doing the Blazeman Roll at the 2019 Vega IRONMAN World Championship in Kailua-Kona, Hawaiʻi on Saturday, Oct. 12. Russell does the Blazeman Roll in honor of his mother, who passed away from ALS. (Photo Credit: Tom Pennington / Getty Images for IRONMAN) 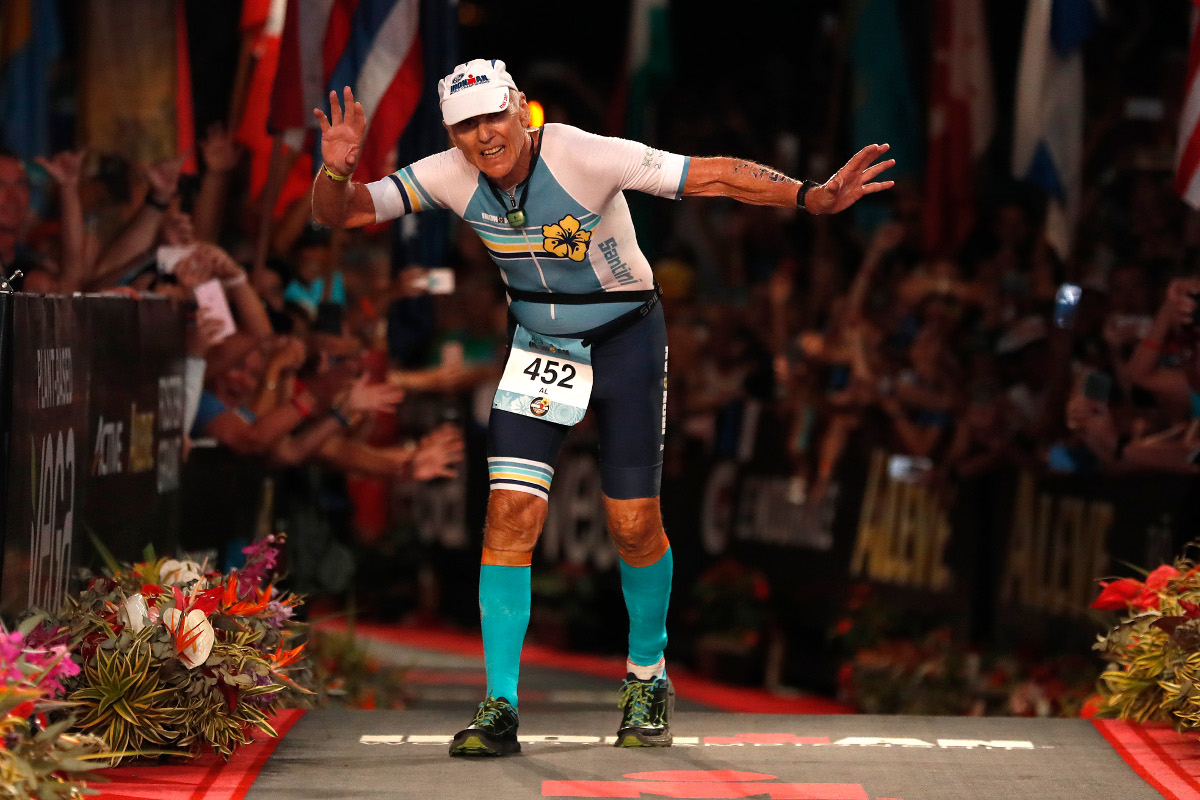 FINAL FINISHER: Al Tarkington, 80-years-old, of the United States is the final finisher at the Ironman World Championships on October 12, 2019 in Kailua Kona, Hawaiʻi. (Photo by Sean M. Haffey / Getty Images for IRONMAN)