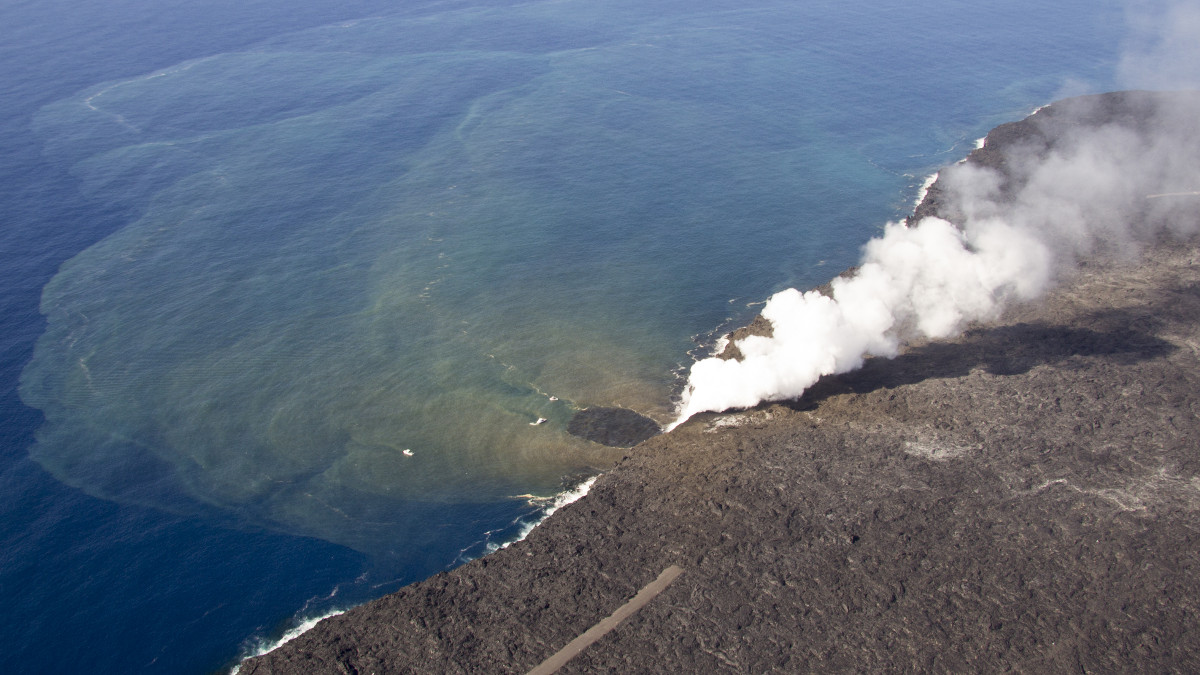 image courtesy USGS Hawaiian Volcano Observatory, taken in March 2017 back when a firehose of lava was continuously pouring into the sea at the Kamokuna ocean entry.

HAWAIʻI ISLAND - The Hawaiʻi BLNR took enforcement action on the lava boat tour back in April 2017. The lava ocean entry, and the entire eruption of Kīlauea, has since ended.

(BIVN) – Kīlauea Volcano is no longer erupting, and so there is no active lava ocean entry to be seen anywhere on the island. However, the Hawaiʻi judiciary is still sorting out disputes related to lava tourism activity from years ago.

On Friday, the State Department of Land and Natural Resources shared this information, after a September circuit court decision:

Administrative fines totaling $48,500 have been affirmed by Circuit Judge Greg K. Nakamura in a Board of Land and Natural Resources (BLNR) decision against illegal commercial lava boat tours on Hawai‘i Island; in a ruling issued on September 27, 2019. Those fined are Henry K. Pomroy, Bill A. Fujimoto, and Ho‘okupu Fish Company, LLC.

“We are very satisfied with this ruling,” said Edward Underwood, Administrator for the DLNR Division of Boating and Ocean Recreation (DOBOR). “The purpose of the commercial use permit rules is to ensure that companies are following all Federal, State, and County laws and conducting their operations with proper regard to public safety and natural resource protection,” Underwood continued.

The DLNR Division of Conservation and Resources Enforcement also issued Pomroy a criminal citation for violation of Hawaii Administrative Rules, but the Hawai‘i County Prosecuting Attorney’s Office dismissed the criminal citation. DOBOR brought the administrative enforcement action before BLNR at its April 28, 2017 meeting, alleging multiple instances of illegal commercial activity and requesting a total of $140,000 in administrative fines. Steven D. Strauss, then-managing member of Ho‘okupu Fish Company, LLC, as well as attorney for Pomroy and Fujimoto, requested and was granted, a contested case hearing on the enforcement action.

According to DOBOR, Pomroy was warned that he was operating illegal commercial lava boat tours because he did not have a valid commercial permit authorizing the tours. Pomroy continued to repeatedly conduct illegal lava tours from the Pohoiki Boat Ramp, then instituted a “membership” scheme with assistance from Strauss, where customers would pay to enter into an agreement for “Conveyance of Membership Interest in Ho‘okupu Fish Company, LLC.” Pomroy argued that members of Ho‘okupu Fish Company, LLC were taking boat rides as members of the company and therefore were not paying customers.

“We recognized this scheme as an attempt to circumvent our commercial permit system and took action to put an end to it. Unpermitted commercial operations not only pose a threat to public safety and natural resource protection but are also unfair to the other commercial operators who comply with permitting requirements,” Underwood stated.

The contested case Hearing Officer ruled that there was commercial activity taking place and that the agreement for membership interest did not void the commercial use permit requirement. BLNR voted to impose the fine, including attorney fees and administrative costs at $48,500. Pomroy, Fujimoto, and Ho‘okupu Fish Company, LLC then appealed BLNR’s decision to the Circuit Court.