HILO, Hawaiʻi - Wailoa River and Waikea Pond are overwhelmed with Nile Tilapia, and the state says the invasion highlights the risks of introduced species. 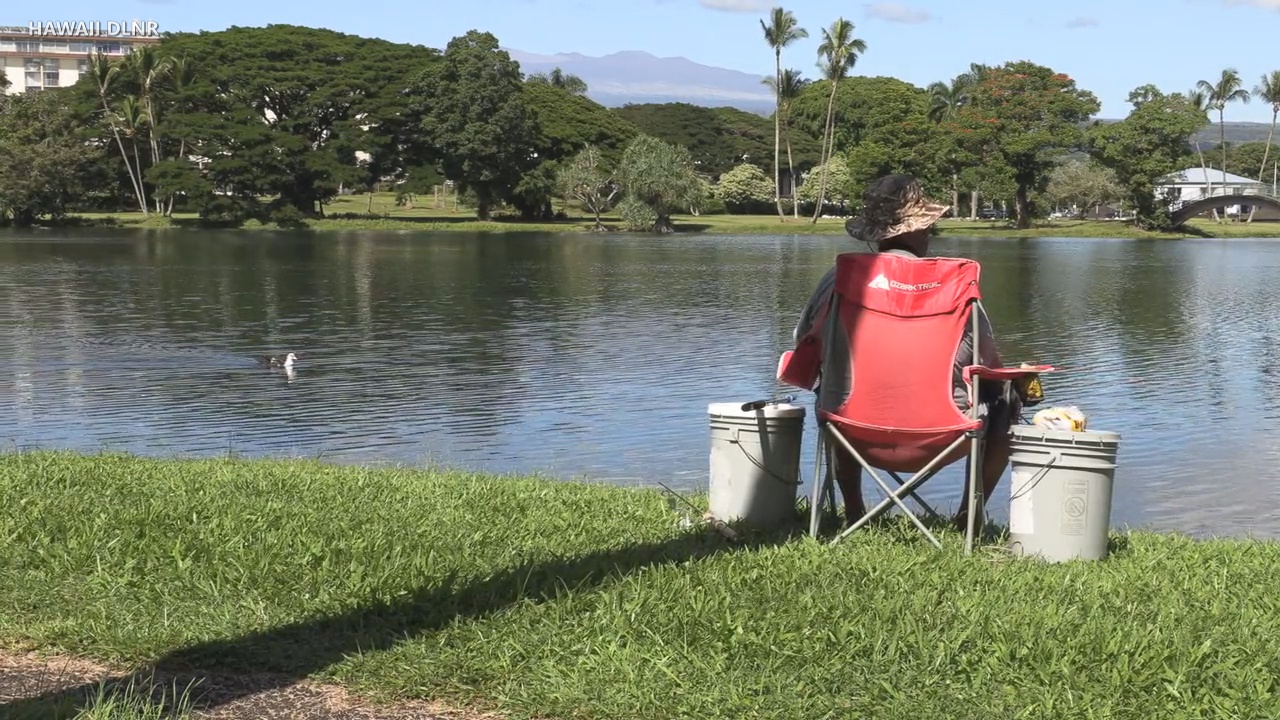 Fishing at Wailoa River, image from video by Hawaiʻi DLNR

The Hawaiʻi Department of Land and Natural Resources captured video of the Nile tilapia swimming around the river, and recorded interviews with Division of Aquatic Resources representatives. The footage was made available to media, along with this news release:

With the naked eye you can see large schools of Nile tilapia in Hawai‘i Island’s Wailoa River system including its tributary Waiākea Stream and Waiākea Pond which sits in the middle of Wailoa River State Park in Hilo.

Two years ago, this species of tilapia was reclassified by the State Board of Agriculture as a restricted species only for research – to permit importation for aquaculture facilities to farm raise them. While there’s no evidence that a recent “invasion” of the tilapia in fresh water streams has anything to do with commercial farming operations, it confirms fears DLNR and Division of Aquatic Resources (DAR) leadership and biologists expressed when Board members were debating whether to allow the State Dept. of Agriculture to revise its rules to permit aquaculture importation of Nile tilapia.

Brian Neilson, DAR Administrator explained, “Unfortunately, Hawai‘i has a long history of bringing in species, thinking that they’ll provide some commercial or ecosystem benefit, to discover later that these same species out-compete native species. We are now seeing stark evidence of this. While Nile tilapia were present in the Hilo waterways before aquaculture operations began, reports of Nile tilapia or hybrids are on the rise indicating that their population may be increasing, and their range may be expanding. That’s the real downside of bringing non-native species into the state for any reason.”

Local fisherman, as with a recent invasion of Black Chin tilapia along Kaua‘i’s Napali Coast, were among the first to see and report increasing numbers of Nile tilapia in the Wailoa River and its associated waterways.

Kim Fuller, a DAR aquatic invasive species biologist explains that Nile tilapia are valuable for commercial food production for the very same reasons they can become pests when they’re present in natural fresh water environments. She said, “They reproduce quickly, grow quickly, and are very competitive for food resources with native fish. Worldwide, Nile tilapia have a history of invasion and when we did our risk assessment for the introduction of these fish, we found them to be fairly high risk of becoming invasive in Hawai‘i.”

The Wailoa River system is known as Hawai‘i’s prime mullet fishery. “Our biggest concern right now, is the Nile tilapia is competing with the native mullet (‘ama‘ama) for habitat and resources and potentially affecting the fishery,” commented Hilo-based DAR aquatic biologist Troy Sakihara. He and his team have been taking in both live and dead tilapia caught by fishermen and he marvels at how fast and large the Nile species grows. “What makes them particularly troublesome as a potential invasive species, is they can survive and take over in a wide-variety of habitat conditions. Their very hardiness makes them an issue,” Sakihara explained.

The reasons behind the current increase in the Nile tilapia invasion in Hilo are not known, but biologists caution that while aquaculture farming facilities are “closed systems,” all it takes is one lapse in biosecurity measures and then quickly you see an invasion population of these fish.

The DAR team in Hilo is in the process of determining what to do to try and control the burgeoning population of Nile tilapia, including the possibility of an open fishing tournament. There are no restrictions or bag limits on tilapia and for now biologists say, catch and eat as many as you want.