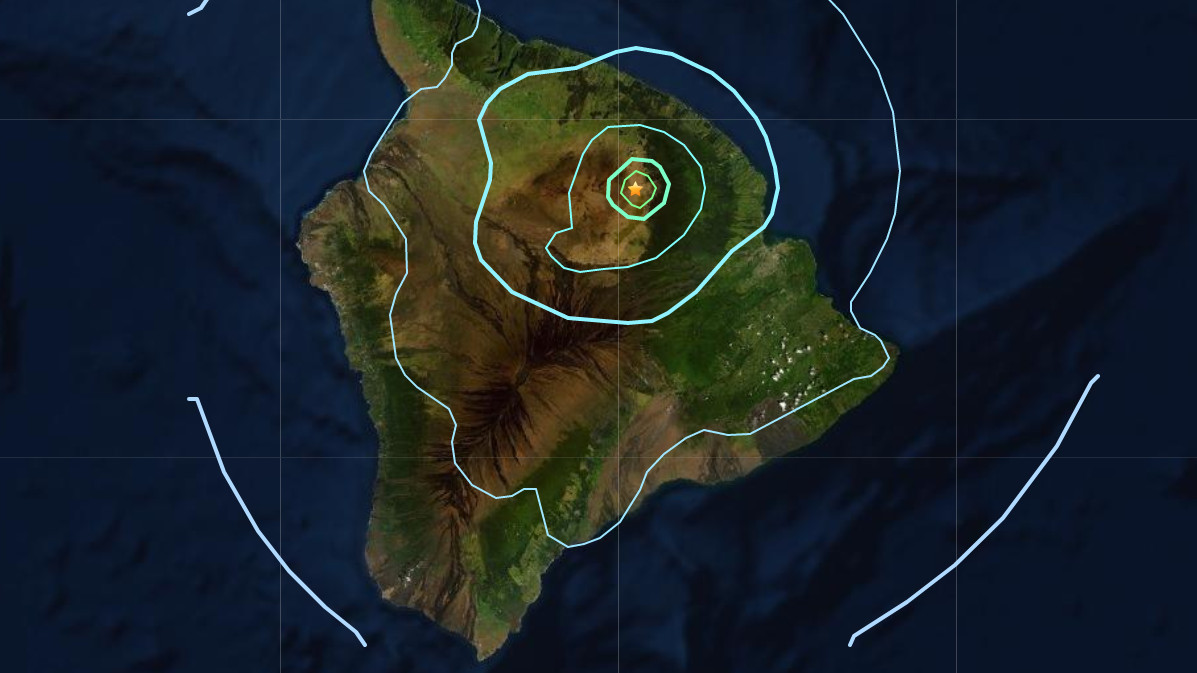 HAWAIʻI ISLAND - Veterans Day on Hawaii Island began with a jolt, as an earthquake shook the island.

Early information shows the earthquake was centered on the east slope of Mauna Kea in the district of Hāmākua, 12 miles southwest of Laupahoehoe, at a depth of about 8 miles. After the event was reviewed by the USGS Hawaiian Volcano Observatory, the depth was revised to 19 miles.

The USGS HVO website shows several aftershocks (smaller red circles in the image below) are occurring in the area, as well. 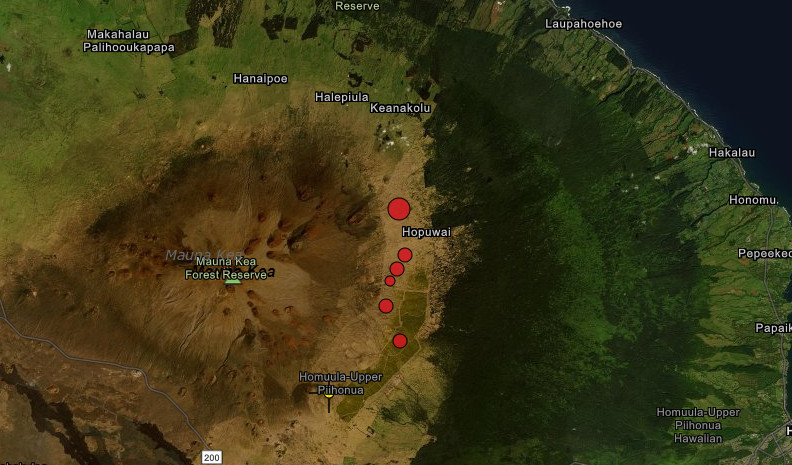 UPDATE: The Pacific Tsunami Warning Center, which measured the quake at a Magnitude 4.8, reports that no tsunami was generated by the event. However, some areas may have experienced shaking.

UPDATE: According to a Hawaiʻi County Civil Defense radio message, the USGS HVO reports that the earthquake did not coincide with any changes in the volcanoes on the island.

Debris has also been reported on roadways in the Hāmākua district.

UPDATE: Hawaiʻi County Civil Defense says “as in all earthquakes, be aware of the possibility of after-shocks. If the earthquake was strongly felt in your area, precautionary checks should be made for any damages; especially to utility connections of gas, water, and electricity.”

The U.S. Geological Survey’s Hawaiian Volcano Observatory (HVO) recorded a magnitude-4.9 earthquake on Monday, November 11, just before 6:36 a.m. HST. This magnitude may be refined as HVO seismologists continue to analyze the earthquake.

The earthquake was located 17 km (about 11 mi) southwest of Laupāhoehoe on the Island of Hawai‘i at a depth of 33 km (20 mi). A map showing the location of the earthquake is posted on HVO’s website. More details are available at the National Earthquake Information Center website.

Light to moderate shaking, with a maximum Intensity of V on the Mercalli Intensity Scale, has been reported around the Island of Hawai‘i, with weak shaking reported from as far away as Oʻahu. The USGS “Did you feel it?” service received over 1000 felt reports within an hour of the earthquake.

A magnitude-2.6 foreshock occurred in the same area about three minutes prior to the mainshock. Aftershocks have already been recorded; more are likely, and some could be felt.

The depth, location, and recorded seismic waves of the M4.9 earthquake suggest a source due to bending of the oceanic plate from the weight of the volcanoes in the Hawaiian Island chain, a common source for earthquakes in this area.

According to HVO Scientist-in-Charge Tina Neal, “HVO monitoring networks have not detected any significant changes in activity on Kīlauea or Mauna Loa Volcanoes due to the earthquake.” The Pacific Tsunami Warning Center has stated that there is no tsunami threat from this earthquake. Hawaii County Civil Defense reports that Department of Public Works personnel will be checking roadways in the area for rockfalls.