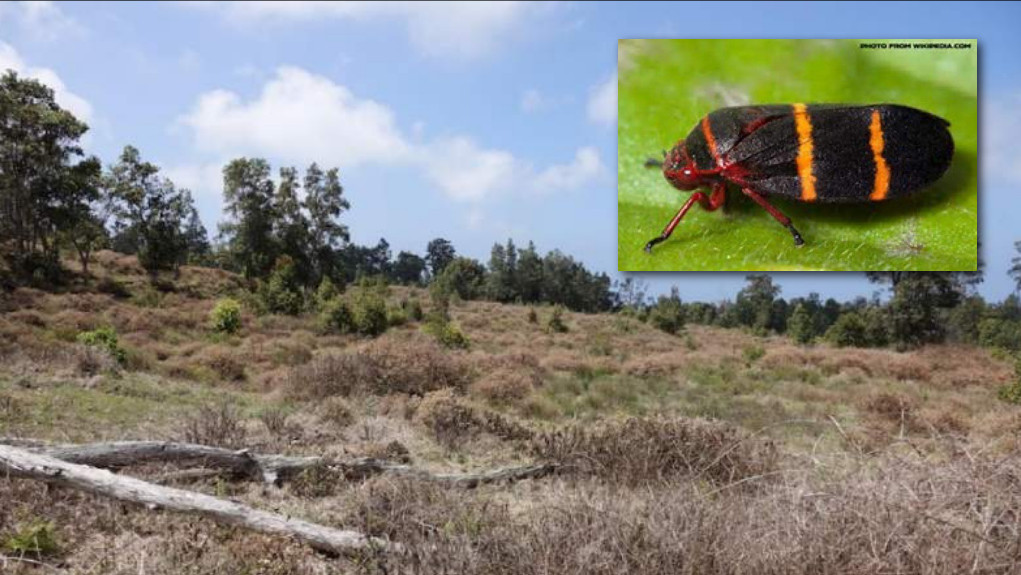 from the UH-CTAHR spittlebug alert of March 2017.

WASHINGTON - The Hawaiʻi senator is concerned that the invasive pest could destroy the island's "proud heritage of ranching by decimating the pastures that allow Hawai‘i cattle to grow strong and healthy."

(BIVN) – U.S. Senator Brian Schatz (D-Hawai‘i) is calling on Secretary of Agriculture Sonny Perdue to help in the fight against the invasive spittlebug pest, which threatens Hawai‘i Island’s livestock industry as it destroys acres of pasture lands.

“Our ranchers need your help urgently to maintain this vibrant part of Hawai‘i’s agricultural economy,” the Senator said. The senator called for immediate federal aid for Hawai‘i Island ranchers affected by the pest and additional resources to help save critical grazing land from further destruction.

The two-lined spittlebug is native to the southern United States, Schatz explains, and was first discovered on Hawai‘i Island in 2016. The invasive pest has already devastated more than 125,000 acres of pasture grass.

Here is the full text of the senator’s letter to Secretary Perdue:

I am writing to request your intervention to manage the threat that the two-lined spittlebug (Prosapia bicincta) poses to pastureland in Hawai‘i Island. This invasive pest could destroy Hawai‘i’s proud heritage of ranching by decimating the pastures that allow Hawai‘i cattle to grow strong and healthy. Our ranchers need your help urgently to maintain this vibrant part of Hawai‘i’s agricultural economy.

Based on a 2019 report authored by a University of Hawai‘i Extension Agent, the spittlebug was initially detected in 2016, when it had damaged roughly 2000 acres of pastureland. Without natural predators, or any approved pesticide for use on pastureland, that number had grown to roughly 125,915 acres by 2019. According to the report, the spittlebug has caused nearly 100 percent die back in key pasture grasses in highly infested areas. Worse, the die back of desirable grasses has made it possible for invasive plants to spread in their place. Ranchers additionally complain that grasses damaged by the spittlebug supply less nutrients to their cattle.

To provide immediate assistance, I request help from the Farm Service Agency to proactively contact Hawai‘i Island ranchers and help them apply for any available aid for ranchers who have lost pastureland. I also request the assistance of the Pacific Basin Agricultural Research Center (PBARC) to develop effective controls to help Hawai‘i’s cattle ranchers save their pastures. In particular, the joint work of the University of Hawai‘i and PBARC to identify an indigenous nematode as a potential biocontrol agent seems promising, and I ask for your continued support of this effort.

On a related matter, I recently contacted you to request your assistance on a newly-discovered species of longhorn beetle (Acalolepta aesthetica). I appreciated your response and pledge of the continued support of PBARC to study and control the beetle. However, the emergence of yet another pest in such a short time suggests the need for a better response than simply reacting to each newly discovered pest.

I would like to meet with you to discuss how we can better integrate the efforts of your Department’s outstanding scientists at PBARC and the Institute of Pacific Island Forestry with those at the University of Hawai‘i and the U.S. Geological Survey’s Pacific Island Ecosystem Research Center. While I understand and appreciate the informal collaboration of these institutions on the ground, I believe the time has come to consider a more formal arrangement, with additional resources to provide the support Hawai‘i needs against invasive pests.