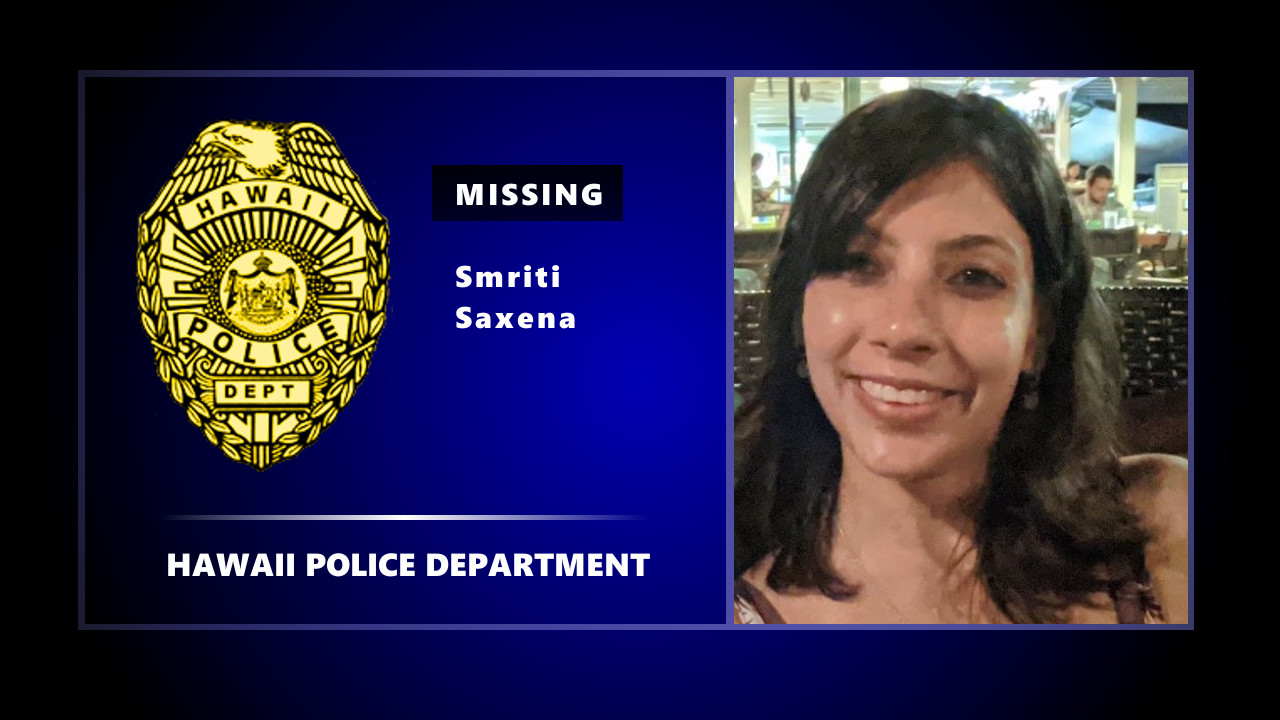 KOHALA COAST - Hawaiʻi police are conducting a criminal investigation after the discovery of a body Wednesday morning near ʻAnaehoʻomalu Bay in the district of South Kohala.

(BIVN) – The husband of a woman who went missing near ʻAnaehoʻomalu Bay on the South Kohala coast Tuesday evening was arrested after a body was found the next day.

On February 19 at 1:33 a.m. in the morning, the Hawaiʻi County Police Department issued a Nixle alert, announcing that Smriti Saxena – a 41-year-old female from Bellevue, Washington – had been reported missing. She was last seen at the Lava Lava Beach Club in Waikoloa near ʻAnaehoʻomalu Bay on Tuesday evening at around 10:30 p.m.

In a West Hawaiʻi Today article published Wednesday before noon, Smriti’s husband Sonam Saxena asked for the public’s help in locating his wife. He told the paper that his wife suffered an asthma attack during a walk following the Lava Lava visit, and that he went back to their room at the Waikoloa Beach Marriot Resort to retrieve her inhaler. He told the newspaper that when he got back to the spot on the beach where he left her, Smriti was gone.

On Wednesday morning, police reported that a body was found near ʻAnaehoʻomalu Bay, and that a criminal investigation was underway.

“The identity of the female body is being withheld pending positive identification and notification of next of kin,” police stated. “However, the body was located in the general area where Smriti Saxena (F-41 of Bellevue, Washington) was reported as a missing person and last seen Tuesday evening (February 18).”

Then, husband Sonam Saxena apparently took to Twitter to deliver his next message, tagging Governor David Ige, Hawaiʻi County Police, and Big Island Video News, among others, saying “my wife has been missing since last night and @Hawaii_Police is busy giving interviews to media about body recovered, but is unwilling to pick up my phone.”

Police then issued another release, saying that an arrest was made.

“Sonam Saxena (M-43 of Bellevue, Washington) had been arrested on the count of Murder in the second- degree as detectives with the Area II Criminal Investigation Section are continuing this investigation,” police wrote. “An autopsy is scheduled to determine the exact cause of death. ”

Sonam Saxena has not tweeted since.

Police ask anyone who may have been in the area of the south beach area of ʻAnaehoʻomalu Bay Tuesday evening (February 18) to please contact Detective Keith Simeona at (808) 326-4646 x281 or email Keith.Simeona@hawaiicounty.gov or the police department’s non-emergency number at (808) 935-3311.