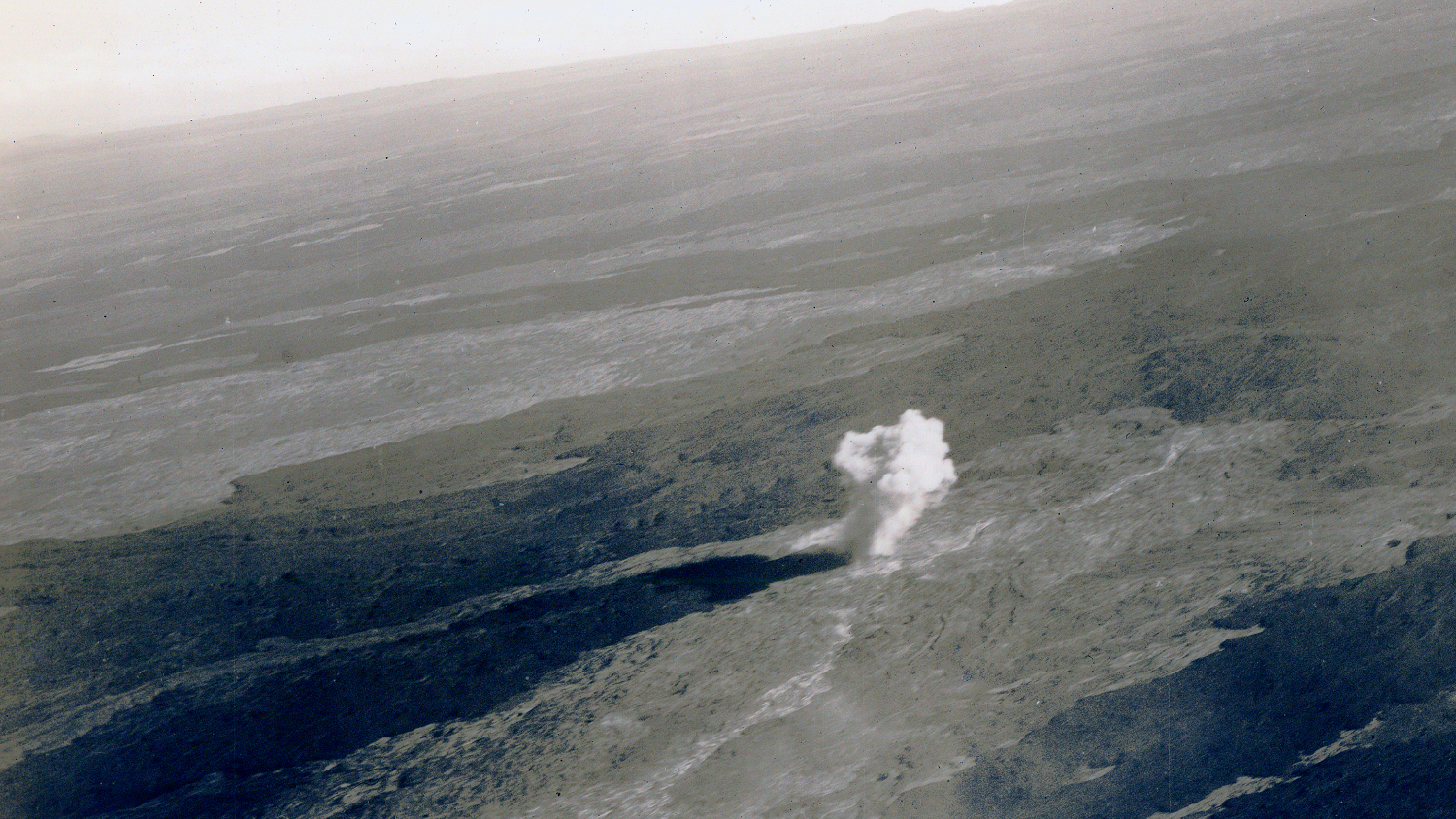 Inset of photo showing aerial view of a bomb detonating on Mauna Loa near the source of the 1935 Humuʻula lava flow on the morning of December 27, 1935. This was one of 20 demolition bombs dropped on the lava flow that morning by the Army Bombing Squadron from Luke Field, O‘ahu. Photo by Army Air Corps, 11th Photo Section. Full photo below.

HAWAIʻI ISLAND - Scientists and affiliates of the U.S. Geological Survey Hawaiian Volcano Observatory tell "the rest of the story" in this week's article.

(BIVN) – In the latest Volcano Watch article, USGS Hawaiian Volcano Observatory scientists pick up where they left off last week, telling part two of the series, “Old bombs found on Mauna Loa: The rest of the story”.

Last week’s Volcano Watch provided details of events leading up to the dropping of bombs on a Mauna Loa lava flow on December 27, 1935. Here’s the rest of the story.

Even though the 1935 Humu‘ula flow was still miles from Hilo, Thomas A. Jaggar, Director of the Hawaiian Volcano Observatory and architect of the experiment, requested aerial bombing of the lava. His motivation was to prevent the flow’s advance into the nearby Wailuku River, which would affect the city’s water supply.

Hours after bombs were dropped by U.S. Army Air Corps airplanes, Jaggar declared the bombing a success on a radio broadcast. “Our purpose was not to stop the lava flow, but to start it all over again at the source so that it will take a new course,” he said. The bombs were successfully dropped (“direct hits on all targets”), but Jaggar waited to see any effects on the lava flow.

The Humu‘ula flow slowed but continued to advance, and at 10 a.m. on Saturday, December 28, it turned northeast into the Hilo Forest Reserve 31 km (19 mi) from Hilo Bay. Fires ignited by the lava were visible from Hilo and posed an additional threat to Hilo’s water supply.

By late Saturday afternoon, Jaggar reported on the flow’s slowing, but was not yet prepared to say that it was the result of the previous day’s bombing. There were no reports of a new flow issuing from the vents, “which,” according to Jaggar, “was the object of the bombing.”

The flow stopped overnight but resumed its forward movement on Sunday evening and continued to advance toward the Wailuku River headwaters. By Thursday morning, January 2, 1936, the Humu‘ula flow was declared dead, but gas emissions from the Northeast Rift Zone vents continued.

Jaggar was convinced that the bombing “helped hasten end of the flow.” He said that “in a natural end, the lava would not cease so abruptly.” He expanded on this a few days later: “The Army in one day’s work has stopped a lava flow, which might have continued indefinitely, and have caused incalculable damage to forest, water resources, and city.” There was no mention of whether the diversion had been caused as originally hypothesized.

In late summer 1939, Jaggar visited the 1935 bombing targets. “A striking feature of the bombed area was the existence upstream from some bomb-holes, of tunnel-openings where pudgy pasty stiff semi-aa lava welled up as a heap or pudding. The smashing of the tunnel had cooled the oncoming liquid so that it dammed itself. This confirmed the theory that the bombing solidified the tunnel lava back into the heart of the mountain. With 12 hits out of 16, … there can be no question whatever that the bombing stopped the flow.” Jaggar confirmed his earlier post-bombing conclusion that the bombs had plugged the vent.

A field investigation in the late 1970s reached a different conclusion: “Ground examination of the bombing site showed no evidence that the bombing had increased viscosity, and … the cessation of the 1935 flow soon after the bombing must be considered a coincidence.”

Even as it unfolded, many were skeptical. Jaggar’s boss, Hawaii National Park Superintendent E.G. Wingate, planned to send explosives to the target areas via land because he didn’t believe aerial bombing would be accurate. The Army pilots doubted that bombs would have much effect on an active lava channel, and after dropping them, remained unconvinced.

Regarding the success or failure of using explosives to influence the 1935 lava flow, our view is that the bombing was carried out as the eruption was already waning. Bombing did not start a new flow at the source as Jaggar originally hoped. The Humuʻula flow did not cease abruptly after the bombing but died slowly over the following week. The 1970s investigation confirmed no thickening of vent lava by the bombs as Jaggar claimed.

Volcanologists continually improve methods to forecast lava flows and the hazards they pose. But decisions about lava diversion must be made by local emergency managers. The practicality of lava flow diversion in Hawai‘i is addressed in our December 25, 2014, Volcano Watch.

Back to the 1935 pointer bomb on Mauna Loa. Perhaps it should be left intact as a reminder that lava diversion may not be technically, economically, nor socially feasible for most future Hawaiian eruptions, but is an option that could be considered for some situations. 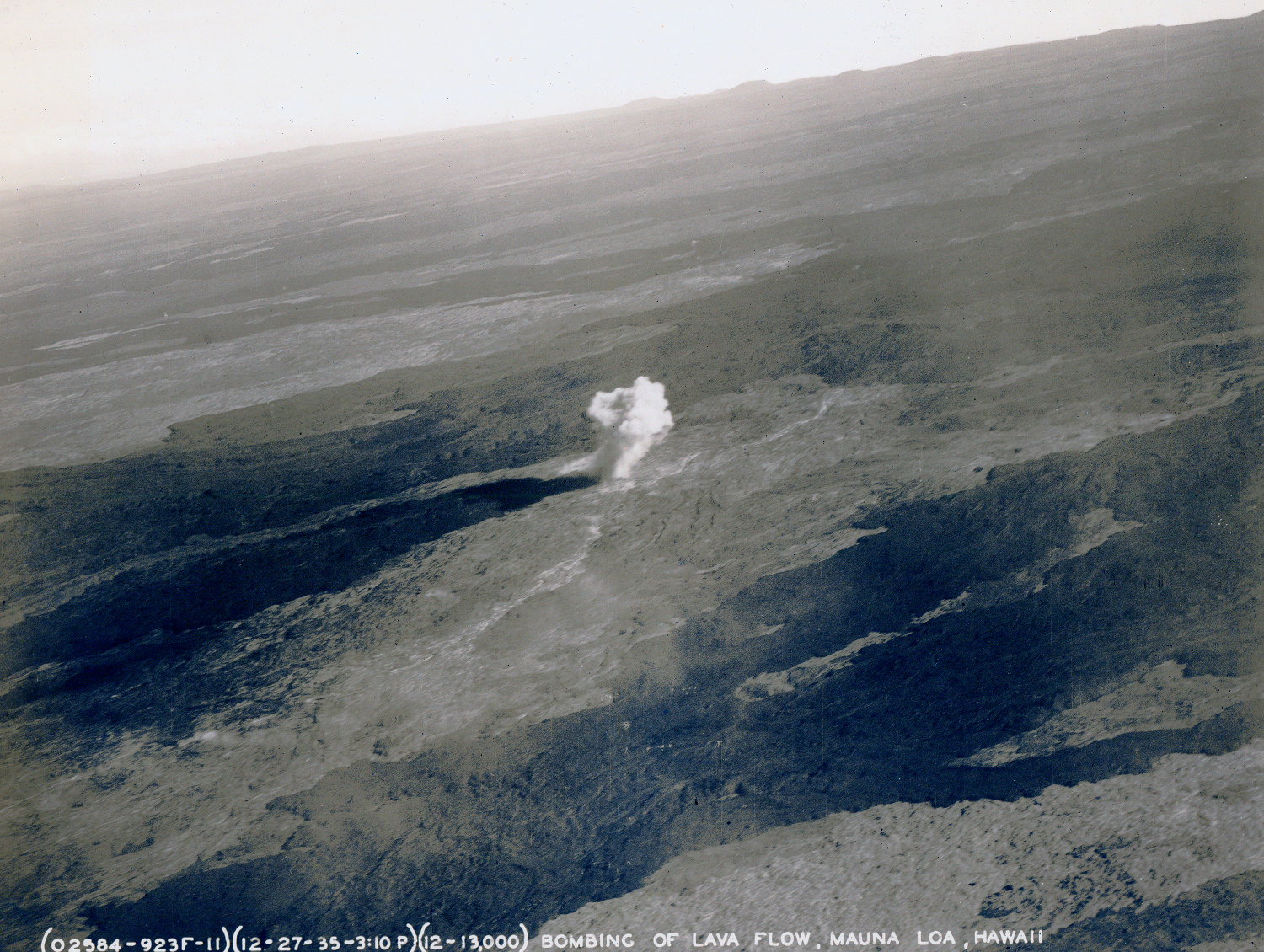 Full photo showing aerial view of a bomb detonating on Mauna Loa near the source of the 1935 Humuʻula lava flow on the morning of December 27, 1935. This was one of 20 demolition bombs dropped on the lava flow that morning by the Army Bombing Squadron from Luke Field, O‘ahu. Photo by Army Air Corps, 11th Photo Section.