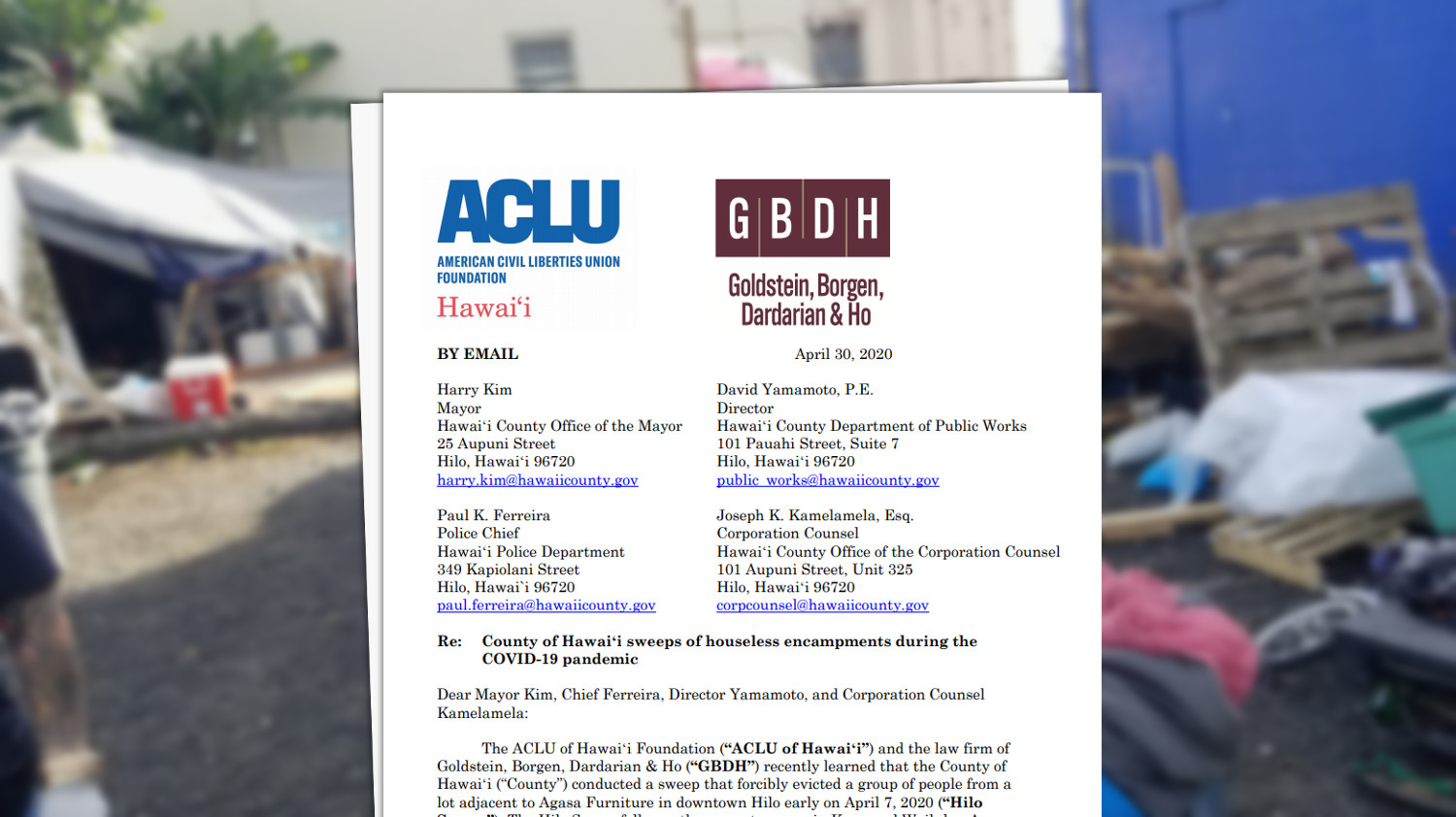 HILO, Hawaiʻi - The ACLU of Hawai‘i and lawyers sent a letter to Hawai‘i County, demanding the immediate stop to sweeps of houseless encampments.

(BIVN) – A civil rights organization and law firm are demanding that the County immediately cease conducting sweeps of houseless encampments during the COVID-19 pandemic.

The ACLU letter says the County’s actions violated both state law and the U.S. and Hawai‘i constitutions. “While the County had initiated a legal proceeding to take ownership of the lot from its owners, that proceeding had not yet resulted in a final judgment and, even if it had, state law requires the government to wait 10 days before executing on the judgment, which the County did not do,” the authors of the letter say. “Further, the letter asserts that the County violated various provisions of the Fourth, Fourteenth, and Eighth amendments to the U.S. Constitution (and the equivalent provisions of the Hawaiʻi Constitution) by, among other things, failing to provide adequate notice, unreasonably seizing and destroying the residents’ personal belongings, affirmatively placing the residents in greater danger of contracting COVID-19, and using the threat of arrest to unconstitutionally coerce them to leave when they had no other safe place to go to.”

“Our team and community partners had been working with the men and women living in this camp, and had continued to do so during the COVID-19 pandemic, providing them with health care, education about COVID, and supplies to minimize their need to venture out into the community,” said Brandee Menino, HOPE Services Hawaiʻi CEO. “They were cooperative and were working with us to develop plans to move into shelter and permanent housing. Mayor Kim’s response — to sweep without providing a safe place to relocate, shows his lack of empathy and concern for these individuals, and puts our entire community’s health and safety at risk of community spread.”

“The County did almost everything wrong in conducting the sweep and mass eviction,” said Wookie Kim, ACLU of Hawaiʻi Staff Attorney. “It disregarded state procedures. It disregarded the Governor’s statewide moratorium on evictions. It disregarded the many protections provided by the U.S. and Hawai‘i constitutions. In short, the County acted as if it were above the law. We are here to ensure that the government stops taking these illegal shortcuts, especially against people who have very little power in our political system, and especially during one of the worst public health crises in modern history.”

Here is the full text of the letter, without the footnotes:

The ACLU of Hawaiʻi Foundation (“ACLU of Hawaiʻi”) and the law firm of Goldstein, Borgen, Dardarian & Ho (“GBDH”) recently learned that the County of Hawaiʻi (“County”) conducted a sweep that forcibly evicted a group of people from a lot adjacent to Agasa Furniture in downtown Hilo early on April 7, 2020 (“Hilo Sweep”). The Hilo Sweep follows other recent sweeps in Kona and Wailuku. As explained below, in conducting the Hilo Sweep, the County skirted the mandates of both the U.S. and Hawaiʻi constitutions and state law. We write to express our concerns not only about the Hilo Sweep, but also the County’s broader policies and practices regarding people who are houseless. These policies and practices are unlawful and unsound under normal circumstances. But they are blatantly unconstitutional and reckless during the present pandemic. So we also write with a demand: The County must immediately cease conducting sweeps of houseless encampments in the County, at least until the COVID-19 pandemic passes.

Given that the County’s ongoing practice of forcibly evicting and scattering houseless people is also substantially and recklessly increasing the risk that they and other members of the community will experience serious harm during the ongoing pandemic, we also ask that you respond in writing, by May 7, 2020, making a public commitment to suspend future sweeps of houseless encampments.

The Hilo Sweep occurred in the lot located at 117 Punahoa Street (“Lot”) in downtown Hilo. In early 2018, County residents Jerilyn Rose and Michael Ravenswing purchased the Lot. At some point after taking ownership, Rose and Ravenswing gave several houseless people permission to reside on the Lot (“Residents”), after which the Residents began putting up tents and structures.

Near the end of 2018, inspectors from the County’s Department of Public Works examined the Lot and allegedly observed building code violations, such as unpermitted fencing and structures. The County began fining Rose and Ravenswing for such violations. Because Rose and Ravenswing did not comply, in April 2019 the County initiated legal action against them to remove the unpermitted structures on the Lot, force compliance with the building code, and require them to pay fines. In January 2020, the County, seeking to satisfy the fines Rose and Ravenswing owed to the County, filed a motion for writ of attachment, execution, and sale of the Lot. On April 6, 2020, the circuit court held a hearing and orally granted the County’s motion.

Early the very next morning—before the court had entered final judgment — the County conducted the Hilo Sweep. Notably, the County moved forward with the Hilo Sweep even though just one day earlier it had signaled to advocates (including HOPE Services and Community Alliance Partners) that it was in favor of a plan to relocate the Residents to the soccer fields on the Hilo bayfront, and even though advocates had offered to provide guidance and support to the County regarding that plan. The County apparently reversed course on its stated commitment to advocates.

During the Hilo Sweep, about 12 police officers and 15 county workers brought at least one bulldozer and several trucks to the Lot and forcibly removed the fifteen-or-so Residents before then seizing and destroying Residents’ remaining personal property. At no point before the Hilo Sweep did the County serve any written notice on the Lot’s Residents. Nor did the County initiate any eviction or other legal proceeding against them. Instead, as the Hilo Sweep was beginning, a County official orally notified Residents that they had a mere 80 minutes in which to completely vacate the Lot. When an advocate from HOPE Services requested more time on Residents’ behalf, the County granted 15 more minutes—but no longer. Unsurprisingly, the Residents were unable to gather and remove the vast majority of their personal property from the Lot in time. As a result—just 45 minutes after the Hilo Sweep began — about 15 Residents were displaced from their residence, most of them without their personal property, and practically all of them without a safe place to go.”

The County’s actions in conducting the Hilo Sweep are illegal and unconstitutional in several respects. Regarding state law requirements, the County did not have clear and final ownership of the Lot when it conducted the Hilo Sweep.

The court had not yet entered any written order stating as much. Indeed, court records reflect that the circuit court entered the order on the County’s motion on April 21, 2020—two full weeks after the Hilo Sweep. Even assuming that any oral order made on April 6 constituted “entry” of judgment, the County appears to have completely disregarded the automatic 10-day stay of execution imposed by statute and court rule. Finally, even assuming that the County had, by the morning of

April 7, appropriately completed the attachment process vis-a-vis Rose and Ravenswing, that does not mean that it had the ability to ignore the Residents’ rights of possession to the Lot and their personal property, in the same way that when a bank forecloses on an owner’s home, it cannot immediately remove existing tenants without completing a separate legal process against them. There is no indication that the County followed any such legal process against the Residents.

The Hilo Sweep also constituted a flagrant violation of Residents’ constitutional rights. First, in failing to provide adequate notice or any opportunity to be heard before seizing and destroying Residents’ personal property and ejecting them from the land on which they had been living with the permission of the prior owners, the County violated procedural due process rights guaranteed by the Fourteenth Amendment to the U.S. Constitution and article I, section 5 of the Hawai‘l Constitution. Second, in unreasonably seizing and destroying Residents’ personal property, the County violated the Fourth Amendment and article I, section 7. Third, by deliberately choosing to evict and scatter the Residents – and thereby affirmatively placing them in further danger of contracting COVID-19 -the County violated substantive due process rights guaranteed by the Fourteenth Amendment and article I, section 5. Indeed, as the attached Declaration of Dr. John Swartzberg, a renowned infectious disease specialist, states, “[c]onducting encampment sweeps and confiscating the belongings of people who are houseless… can increase the risk of adverse outcomes from COVID-19 for those who are subject to the sweep” and “clearing encampments will put lives at risk by increasing transmission of the virus among a vulnerable population.” Fourth, by using criminal law enforcement officers and the implicit threat of arrest to force Residents off the Lot when there were no meaningful safe places for them to go to – particularly at a time when the County’s shelters are hopelessly overcrowded and must also maintain strict social distancing requirements that further limit capacity – the County violated Residents’ rights under the Eighth Amendment and article I, section 12 to be free from cruel and unusual punishment.

The County’s decision to conduct the Hilo Sweep also runs counter to public health. The Hilo Sweep was directly contrary to COVID-19-related guidance published by the Centers for Disease Control and Prevention (“CDC”), which states: “Unless individual housing units are available, do not clear encampments during community spread of COVID-19.” And as Dr. Swartzberg states, “[t]he best solution to protect public health and the safety of the people who are houseless is to secure individual housing units” for houseless people, rather than scattering them, which also causes them to “break connections with service providers.”

For all these reasons, the ACLU of Hawaii and GBDH now demand that the County not conduct any sweeps, evictions, or other enforcement actions against people who are houseless. Such a moratorium must exist at least until the present COVID-19 pandemic passes, but should extend beyond that point as well.

If for some reason the County of Hawai‘1 cannot make this commitment, the ACLU of Hawai‘i and GBDH stand ready to respond appropriately, as they have done before, in defense of civil rights, and against unlawful government action, especially given that the County conducted the Hilo Sweep with such impunity.