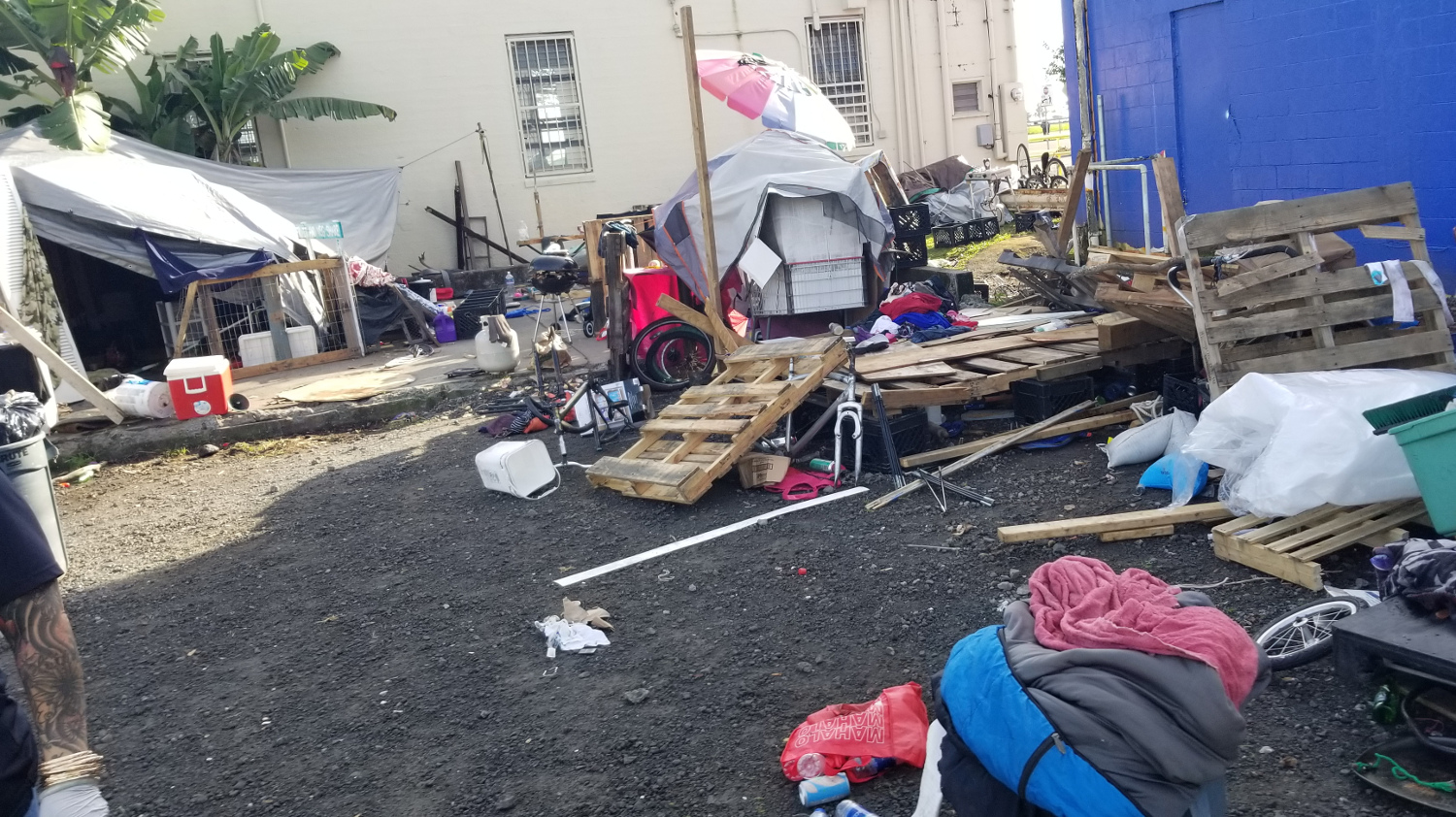 Photo taken before the enforcement action, courtesy the County of Hawaiʻi

HILO, Hawaiʻi - The County of Hawaiʻi undertook another enforcement action, clearing the Hilo property of trespassers on Tuesday. 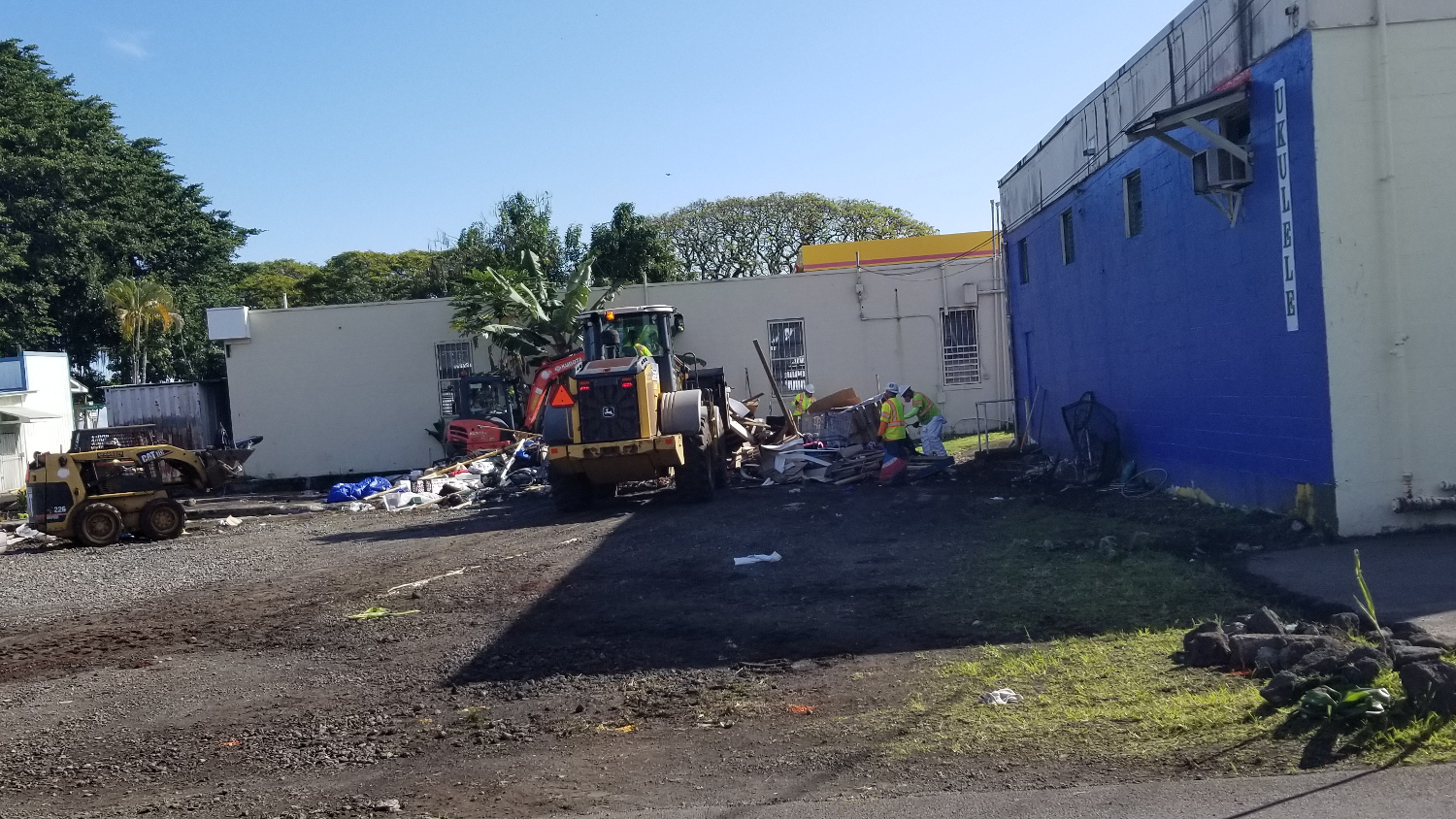 Photo taken during the enforcement action, courtesy the County of Hawaiʻi

(BIVN) – On Tuesday, county officials returned to the site of a homeless encampment in Hilo that was previously cleared back in November 2019, and took action for a second time.

UPDATED – Hawaiʻi police say they took the action at 6:30 a.m. and were joined by other county agencies as well as Hope Services. Together, they removed about 12 people and various structures located on a lot behind Agasa Furniture. Police say those removed from the property were cooperative. About 4 people took advantage of the help offered by Hope Services, while the remaining people elected to seek assistance on their own.

UPDATED – HOPE Services later took to social media to explain that they were not in favor of the county’s action, and said they tried to explain to the administration that the enforcement action was in conflict with official federal guidance from the Centers for Disease Control and Prevention.

The County of Hawaiʻi on Tuesday removed and cleared individuals and their personal belongings for building code violations at the property, located at 117 Punahoa Street., in Hilo (TMK (3) 2-3-009-027), in accordance with an order previously issued by Third Circuit Judge Henry T. Nakamoto, in Civil No. 19-1-0108, County of Hawai‘i v. Elizabeth Jerilyn Rose, MichaelBrock Ravenswing, NSHE HI FOXGLOVE LLC, and NSHE HI THISTLE LLC.

Photo taken after the enforcement action, courtesy the County of Hawaiʻi

As a result of the order and ruling of the Court, the County erected a fence or barrier along the perimeter of the property, along with “No Trespassing” signs. Twelve persons living in an encampment on the site were ordered to leave the site with their personal property and, in addition, were issued verbal trespass warnings by County staff.

Photo taken after the enforcement action, courtesy the County of Hawaiʻi

Appropriate safety measures and use of personal protective equipment (“PPE”) were used during the operation, due to the COVID-19 pandemic. There is no verifiable information to indicate whether any of the persons on the site were infected with the COVID-19 virus. Prior to the removal operation, County and HOPE Services Hawai‘i officials made many visits to the property to provide outreach services to the persons living on the site.

The defendants in the civil case previously defaulted and a Final Judgment was entered on October 1, 2019. To date, the defendants owed the County more than $200,000 (two hundred thousand dollars) in fines and costs.

UPDATED – Lieutenant Robert Almeida of the South Hilo Community Policing Section, who supervised the police part of the operation said, “It was a joint effort, and it was a long process that involved patience, perseverance and everyone working together. We appreciated the cooperation of the all people involved. In all this was a successful operation here.”