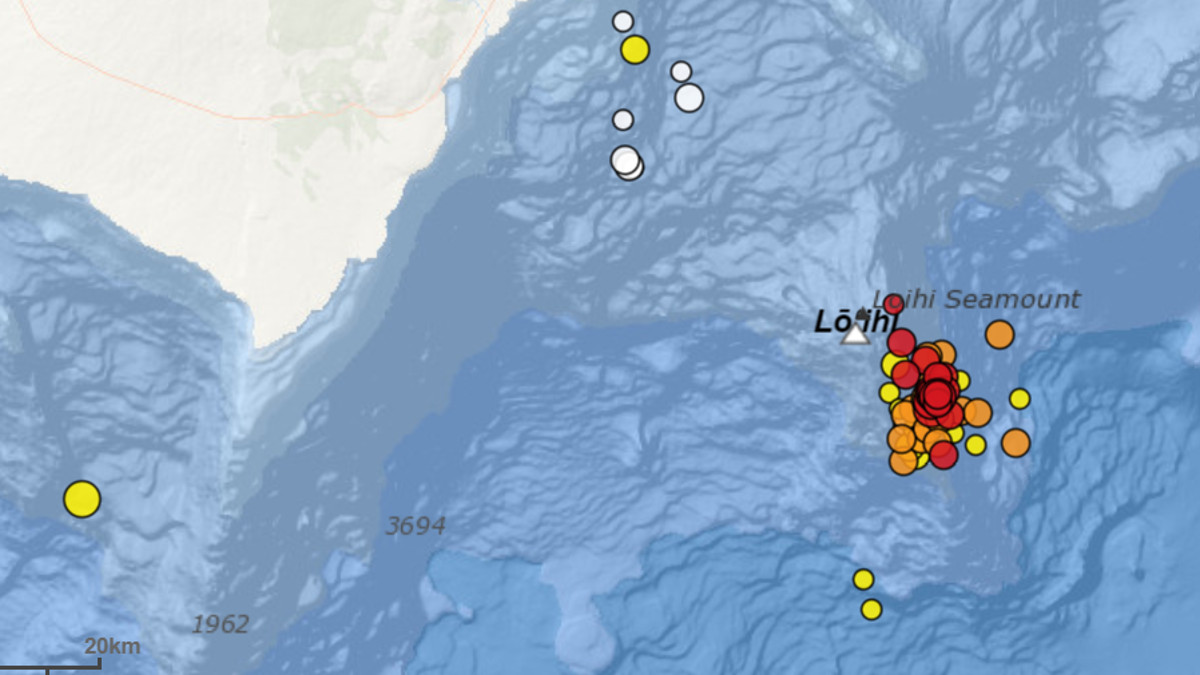 Monday image shows a view of the USGS interactive earthquake map. Red circles are earthquakes that occurred within two hours from when the map was created.

HAWAIʻI ISLAND - The scientist-in-charge of the USGS Hawaiian Volcano Observatory said the earthquakes were notable but did not pose a threat to island residents.

(BIVN) – A swarm of earthquakes in the area of Lō‘ihi, the active submarine volcano southeast of Hawaiʻi island, got the attention of scientists on Monday.

Big Island residents who are subscribed to USGS earthquake alerts received a barrage of email notifications on Monday, with many of the temblors measuring over magnitude 3.0 at depths of about 6 or 7 miles. A handful of the quakes even reached a magnitude 3.7 and 3.8, with a magnitude 3.9 earthquake occurring late Monday just before midnight.

USGS Hawaiian Volcano Observatory Scientist-in-charge Tina Neal said that her team was keeping an eye on the activity, and said that the earthquake swarm was noteworthy. But she also said she would expect to see other, tell-tale signs if there were an eruption occurring at Lōʻihi.

Lō‘ihi is the only known active Hawaiian submarine volcano, located over 3,000 feet below sea level about 22 miles southeast of Hawai‘i island. Lōʻihi erupted most recently in 1996 during an earthquake swarm of more than 4,000 events that were recorded by the HVO seismic network, the USGS HVO website says.

Given its location, its hard to say exactly what may be happening at Lōʻihi. But the present seismicity in the area of the seamount is not a threat to the safety of Hawaiʻi island residents, Neal said.