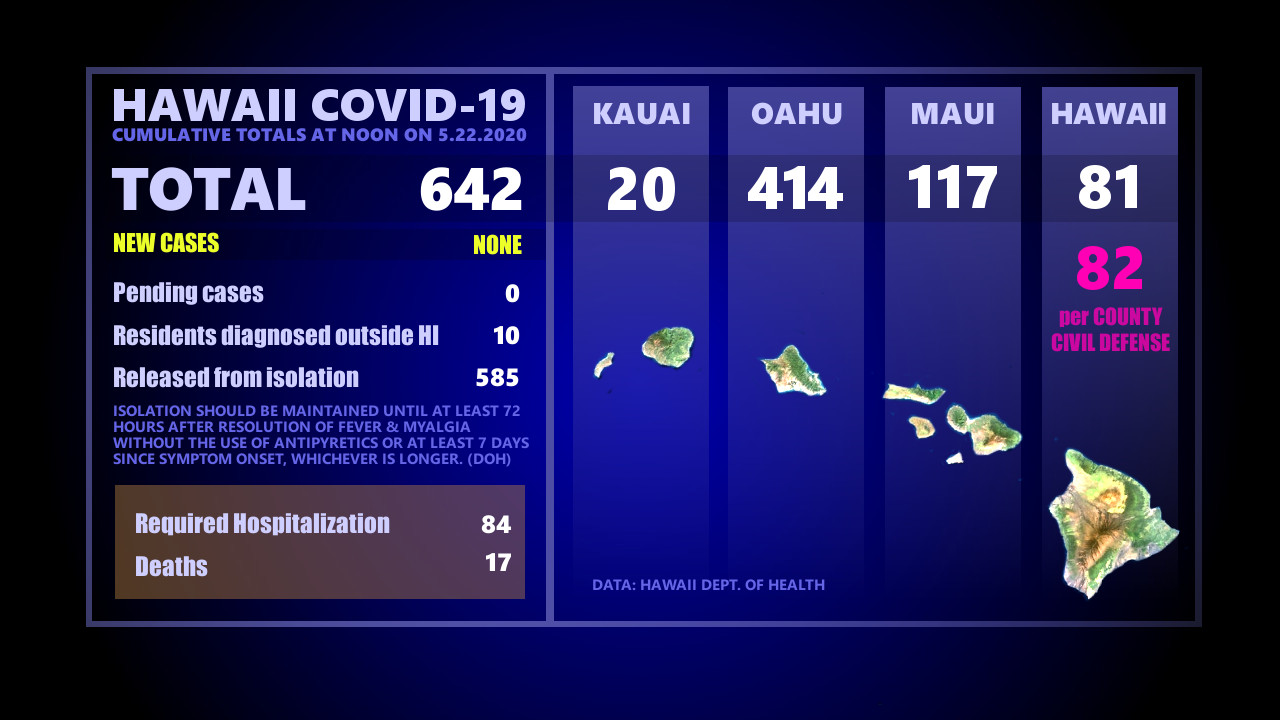 HAWAIʻI ISLAND - Not only were there no newly identified cases of COVID-19 statewide, but the cumulative total was actually decreased on Friday.

(BIVN) – The cumulative total number of COVID-19 cases in the State of Hawaiʻi went from 647 on Thursday to 642 on Friday. Not only were there no newly identified cases as of noon today, but five cases were removed from the counts “as a result of updated testing information”, the Hawaiʻi Department of Health said.

One of those subtracted cases was originally counted towards the Hawaiʻi island total. The total number of cases on the Big Island now stands at 81, down one from 82 reported the day before.

The Hawaiʻi health department says that of the 81 cases counted on Hawaiʻi island, 76 have been released from isolation.

“On this three-day weekend with opening of parks and beaches, know the importance of following the policies of distancing, gatherings, face coverings, cleanliness, and personal health. Please do your part,” stated the Hawaiʻi County Civil Defense in a Friday morning message. “Please be safe on this very special weekend of remembrance in honor of the men and women who died serving our great nation.”

At the direction of the President of the United States, Governor David Ige says he has ordered that “the United States flag and the Hawai‘i state flag will be flown at half-staff at the State Capitol and upon all state offices and agencies as well as the Hawai‘i National Guard in the State of Hawai‘i, immediately — until sunset on Sunday, May 24, 2020.” Flags will also be flown at half-staff for Memorial Day on Monday.

The governor says this action is a mark of respect for the victims of the novel coronavirus pandemic.

Yesterday, 1203 people arrived in Hawaii. During this same time last year, nearly 30,000 passengers arrived in Hawaii daily, including residents and visitors. Yesterday marked two months since the state’s mandatory 14-day self-quarantine started for all passengers arriving in Hawaii from out of state. The quarantine order was expanded on April 1st to include interisland travelers. This table shows the number of people who arrived by air from out of state yesterday and does not include interisland travel. This data was collected from the Hawaii Department of Transportation’s (DOT) new Mandatory Travel Declaration Form.