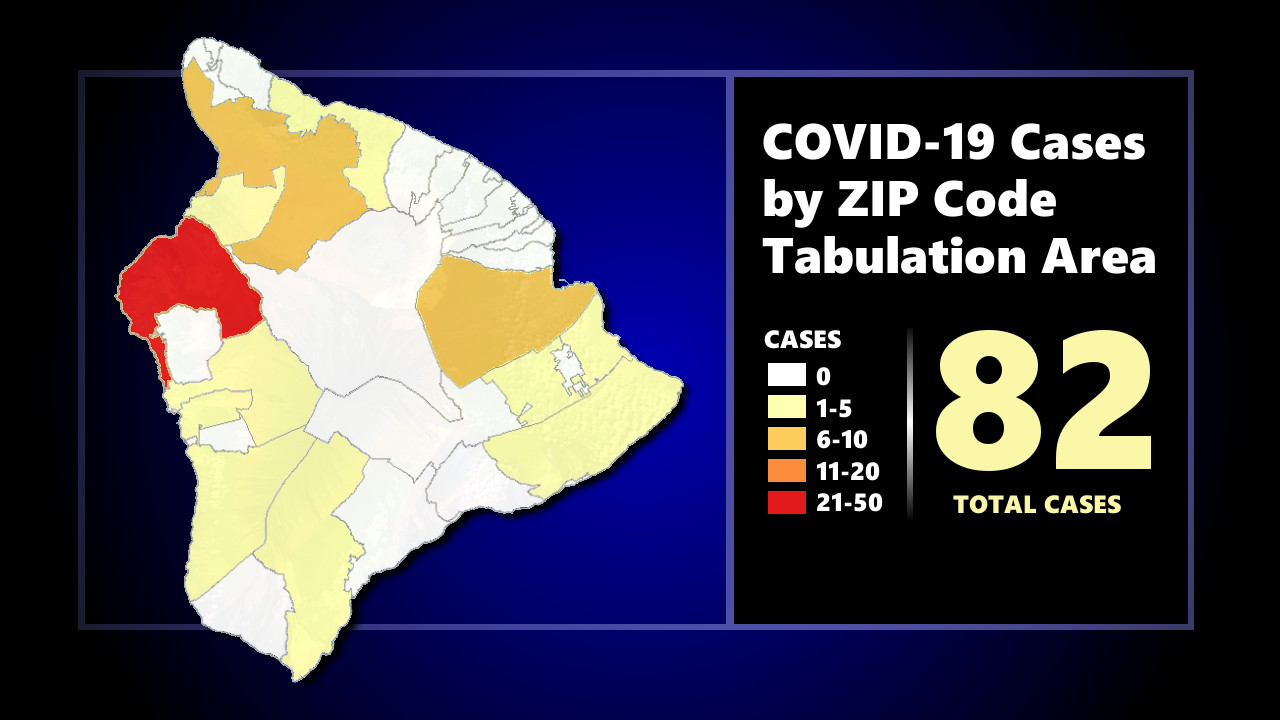 graphic by BIVN, case map reflects the changes to the State's zip code map on May 27

HAWAIʻI ISLAND - Just a few hours after the County of Hawaiʻi reported there were no active cases of COVID-19 on the island, a new case was reported by State health officials.

(BIVN) – The first new case of COVID-19 in 3 days to be reported in the State of Hawaiʻi was announced at noon on Wednesday. The new case was identified on Hawaiʻi island, and was reported just hours after the County government issued a message saying there are no longer any active cases on the island.

The total number of cases statewide is now 644.

There has also been a change in the health department map showing COVID-19 cases by ZIP Code Tabulation Area. The Big Island map now shows a large area of Kohala (mostly South Kohala) has reached the threshold for a new color, apparently surpassing 1 to 5 cases (light yellow), and becoming orange, marking an area that has recorded 6 to 10 cases.

The Hawaiʻi health department reminds that the map “does not imply that risk of transmission is isolated to these [ZIP Code Tabulation Areas]”.

Premier Medical Group with the support of The County of Hawai’i, Hope Services and the Hawaii National Guard, will offer a drive-through screening and testing clinic for COVID-19 at:

These are free clinics that are open to the public, the County says. “However, individuals must first undergo a screening to determine if they meet the criteria to be tested,” a County news release explains. “Clinic physicians on site will make the determination regarding testing. The screening criteria will be based on guidance of the CDC and the State’s COVID-19 Response Task Force. People who visit the screening clinic will be asked to show photo ID. Additionally, people are requested to bring their own pen, and any health insurance cards they have, although insurance is not required.”

Antibody testing will also be available at the both the Kona testing clinic, as well as the Waikoloa clinic. “Antibody testing can determine if you have previously had COVID-19,” the County says. “Antibody testing will be offered only to those previously identified as having had the Coronavirus, or those with high risk exposures, including healthcare workers, first responders, and family members or those with close contact to known positives. A simple blood draw detects the presence of SARS-Cov2 IgG antibodies in your system.” There is a $43 out-of-pocket cost to people whose medical insurance plans do not cover the antibody test. Call your insurance provider to find out if you’re covered, the County says.

Yesterday, 869 people arrived in Hawaii. During this same time last year, nearly 30,000 passengers arrived in Hawaii daily, including residents and visitors. The state’s mandatory 14-day self-quarantine started on March 26th for all passengers arriving in Hawaii from out of state. The quarantine order was expanded on April 1st to include interisland travelers. This table shows the number of people who arrived by air from out of state yesterday and does not include interisland travel. This data was collected from the Hawaii Department of Transportation’s (DOT) new Mandatory Travel Declaration Form.

Of the five violations reported by police for the week of May 20 to 26, none involved visitors violating the 14-day travel self-quarantine.

The Hawaiʻi Police Department says it has continued enforcement of the governor’s “Act with Care” order, as well as “previous orders when appropriate, primarily in cases of non-compliance after verbal warnings or when in conjunction with unrelated calls for service.”

Police officers arrested 2 persons, and cited 3 persons, for the offense of “Prohibited Acts”, broken down by district as follows:

During this past week: Other unrelated criminal offenses, which prompted the police response and subsequent arrest of the suspects, involved Unauthorized Control of Propelled Vehicle (UCPV), and an outstanding Bench Warrant. Some of the behavior exhibited by violators to whom citations were issued consisted of disregarding repeated warning by police, and loitering/consuming alcohol in a closed park.