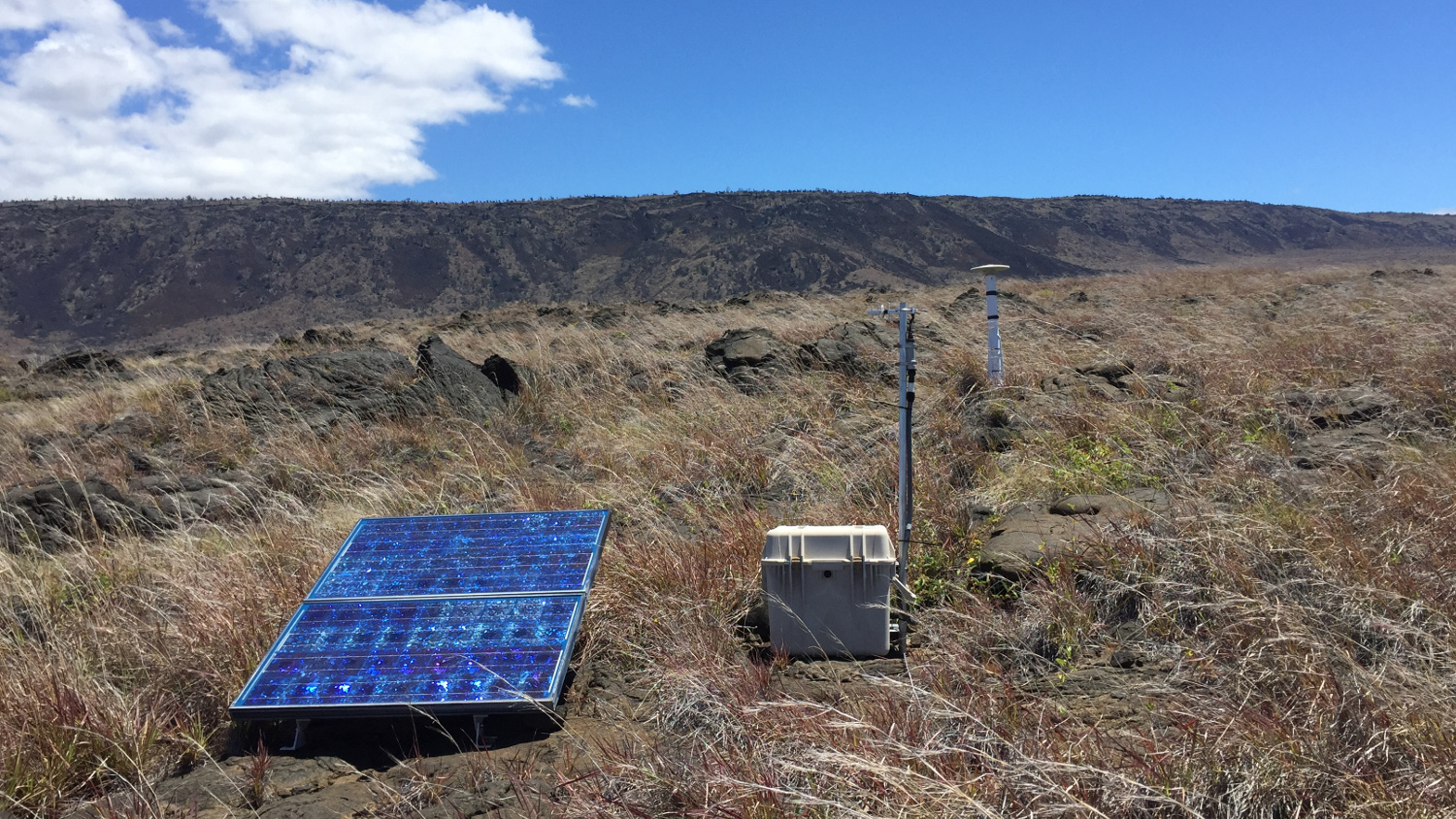 A GPS station that monitors ground deformation on Kīlauea Volcano, one of the approximately 240 volcano-monitoring stations that Steven Fuke, as part of the HVO Technician Group, designs, installs, and maintains. USGS photo.

VOLCANO WATCH: The Life Of An Electronics Technician

HAWAIʻI ISLAND - In this week's Volcano Watch "Tech Talk Part 2", an introspective of Steven Fuke’s life as an “electronics technician” at the Hawaiian Volcano Observatory is presented. 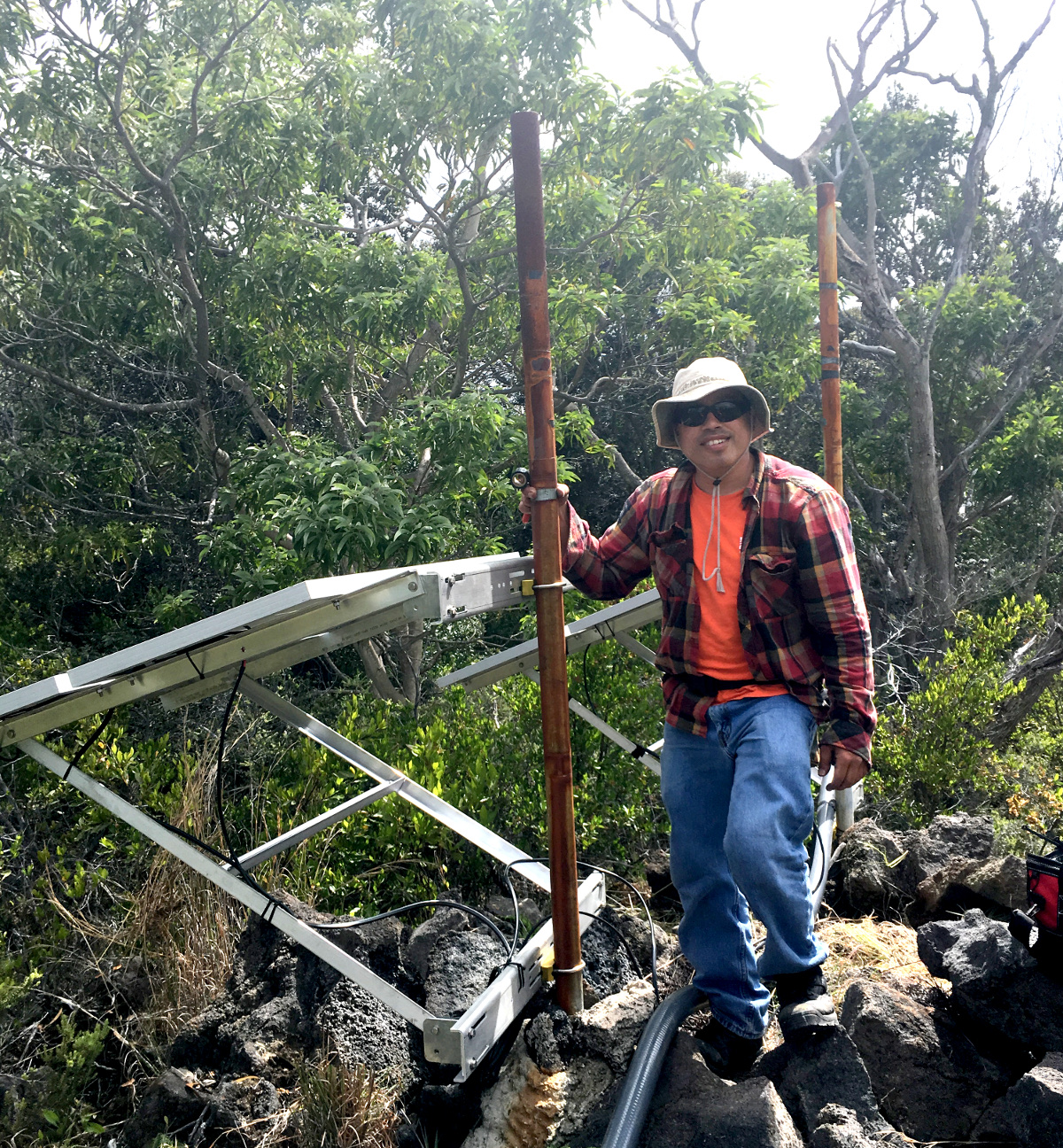 (BIVN) – Last week’s USGS Hawaiian Volcano Observatory Volcano Watch article introduced the role of “technician” in HVO operations. This week, the scientists present part two of their tech talk: an introspective of Steven Fuke’s life – a schematic diagram, authors say – as an “electronics technician” at HVO through his experiences, starting with his introduction to HVO.

I started working at HVO in the summer of 1994, as a student hire, under the former Minority Participation in Earth Sciences (MPES) program, while pursuing an associate degree in Electronics Technology at Hawai‘i Community College. The MPES program allowed me and other community college and college students to experience working for a volcano science organization during the summers and winters. I worked for three years, graduated, and in 1997 I became a permanent HVO staff member.

Within HVO’s organizational structure, I’m part of the “Technician Group.” There is a total of five technicians within the group, one of them being the supervisory technician. Our core mission is to support monitoring and research efforts, ensuring that data are provided to HVO staff so timely hazards information can be provided to the public. HVO’s established volcanic monitoring network consists of over 200 instruments in the field. Sensor data from each remote site is telemetered to their respective collection server. In addition, we add new installations to the network, as determined by scientific and volcanic response needs, and participate in periodic scientific data collection surveys.

At the onset of my career—having limited practical experience—I eventually faced the realities of field design: “sometimes it works” and “sometimes it doesn’t,” “nothing last forever,” and “expect the unexpected.” As an example of “nothing last forever,” I never considered corrosion as a cause leading to the demise of a coaxial cable. This cable is essential for radio frequency transmissions.

With a volcanic monitoring network of approximately 240 stations, I’ve learned how daunting of a task it is to help design and maintain the network. One of my former colleagues coined it “The never-ending job,” which became a truism and the mantra for years to follow. Learning about the network, the environmental conditions that surround the network, and the evolution of technology associated with volcanic monitoring instrumentation is a continuous learning process, synonymous to learning about yourself and others.

Most of our stations rely on 12v battery/solar systems, while others rely on 48v battery/solar systems and a few on 120Vac power. Overall field station infrastructure depends on the type of sensors being installed, radio frequency (RF) function and location of the station. Some stations are only accessible via helicopter while others are accessible by vehicle. Quite a few of our stations are hosted by gracious private entities, land- and homeowners…mahalo! Furthermore, we partner with County, State and Federal government groups to deploy our instruments on their lands to monitor the volcanoes on behalf of the public.

Data outages are inevitable and can occur at any moment, so priorities can shift from day to day in order to bring the data streams back on-line. Problems can run the gamut, from power system failures, corrosion of electrical components and connections, relic or dated “sensors and instrumentation,” lighting strikes, and inundation by lava.

We have installed diagnostic software to monitor the operational status of each station; some of the parameters displayed are battery voltages, GPS status, data gaps, and RF signal strengths. Some stations require weed whacking, fence fixing, solar panel cleaning and general maintenance that’s done multiple times per year. And lastly, stations will eventually become obsolete and require remodeling and/or retrofitting due to sensor and electronic instrumentation upgrades and/or station degradation.

What continues to impress me about this job is “how one job can offer so much variety” and most importantly, the inspiration that the observatory staff provides—with the implementation of the self-learning, continuous improvement process, done in earnest: “There’s a PhD in all of us.”