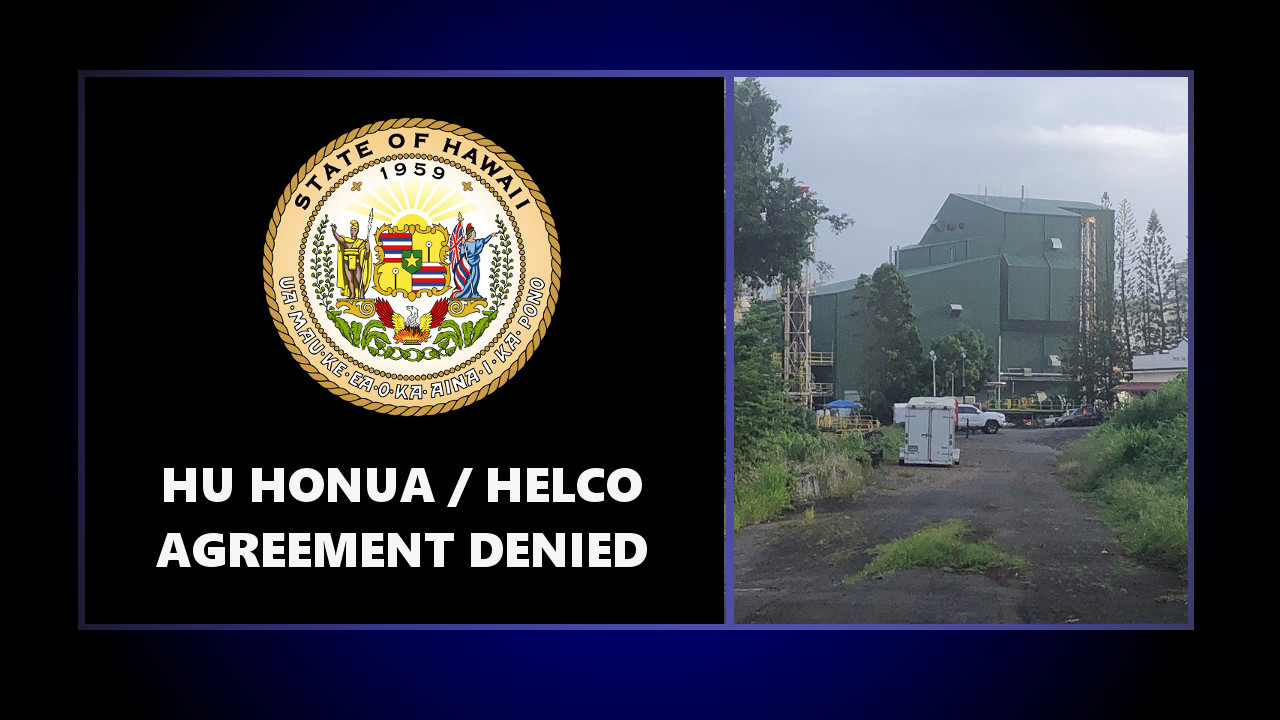 PEPEʻEKEO, Hawaiʻi - The Hawaiʻi Public Utilities Commission has dealt another regulatory blow to the planned bioenergy project on the Hāmākua coast. 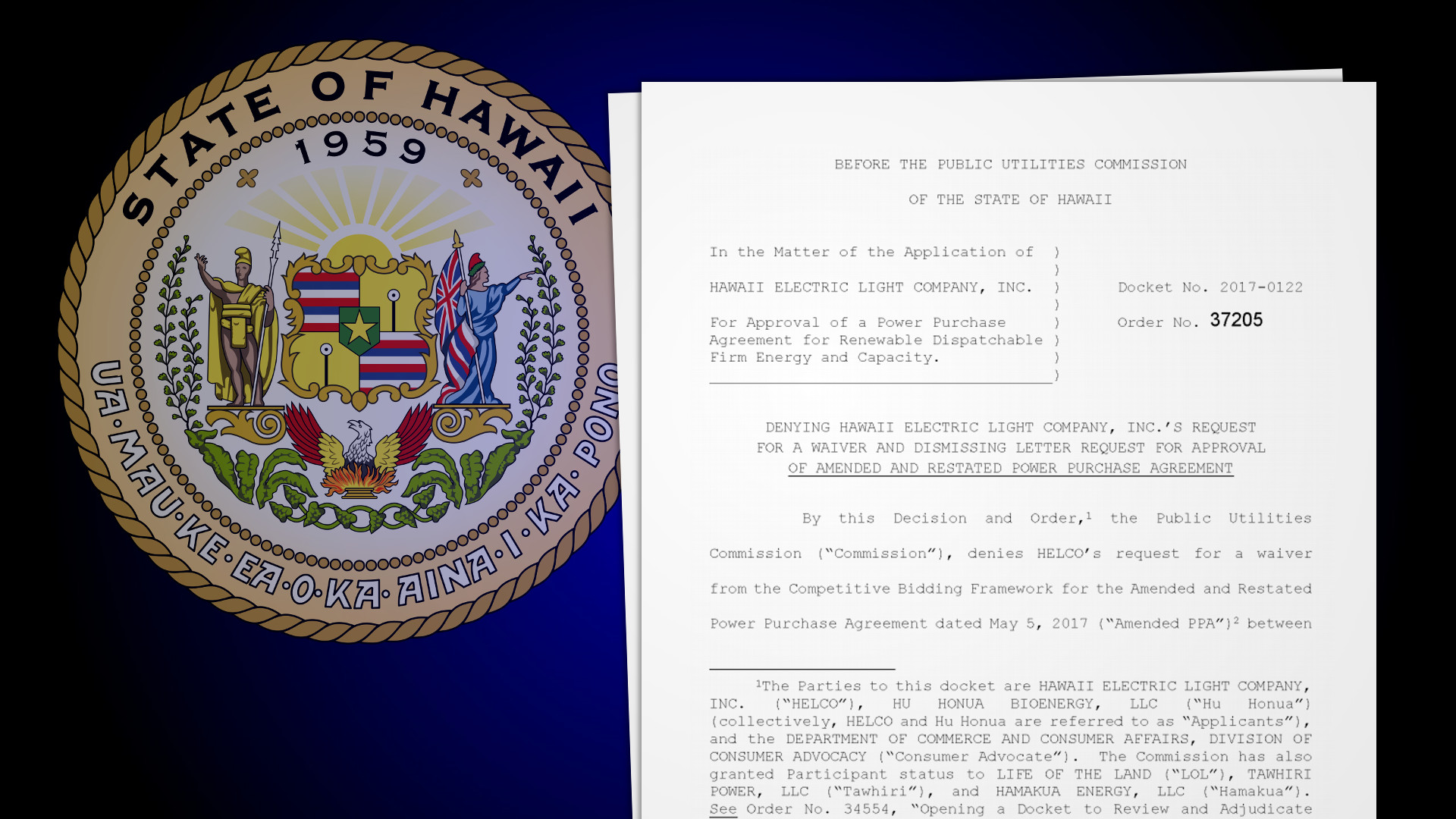 (BIVN) – The controversial biomass project planned for Pepeʻekeo has been dealt another blow by Hawaiʻi regulators.

Hū Honua rebranded itself in recent years as Honua Ola Bioenergy. The company planned to use feedstocks, like eucalyptus, from managed forests in order to produce up to 21.5 megwatts (MW) of power, or about 14% percent of Hawai‘i island’s electrical needs, according to the company.

The PUC denied HELCO’s request for a waiver from the Competitive Bidding Framework for the Hū Honua Project, and dismissed without prejudice the Amended PPA between the utility and the bioenergy company.

In May 2019, the Hawaiʻi Supreme Court vacated the PUC’s previous approval of a PPA between Hū Honua and HELCO after the environmental nonprofit Life of the Land appealed the decision. Life Of The Land argued that the PUC failed to explicitly consider greenhouse gas (GHG) emissions in determining whether to approve the Hū Honua-HELCO agreement.

In Thursday’s ruling, the PUC said it “does not make any express findings or conclusions regarding … the estimated impacts of GHG emissions associated with the Hu Honua Project.”

While the PUC did offer some discussion on the information that was presented on GHG emissions, “the Commission’s decision today renders moot consideration of the Project itself based on the waiver issue, the separate issue of LOL’s due process right to be heard on the Project’s impact on LOL’s property interest in clean and healthful environment is no longer germane, in that the Project will no longer proceed as a result of this docket,” the PUC stated.

Instead of a ruling on greenhouse gas, today’s PUC order stated that HELCO has not met its burden to justify a waiver from the Competitive Bidding Framework for the Hū Honua Project, and said the Commission is not convinced that granting the waiver is justified or in the public interest.

Much of the 55-page order discussed the Commission’s reasoning for the denial of the Competitive Bidding Framework waiver. The electric utility argued that requiring Hū Honua Project to go through competitive bidding “under the circumstances would impede the government objectives and policies” in regards to renewable energy, and “could result in less efficient procurement of more expensive biomass generation due to the expiration of the federal ITC, which Hu Honua anticipated receiving.” However, the PUC noted:

Furthermore, it appears that there is uncertainty as to whether the Hu Honua Project will receive the federal ITC. As a result of “unanticipated delays beyond 2018 which were outside of its control,” Hu Honua failed to meet the safe harbor requirements for the federal ITC by placing the Project in service by the end of 2018. As result, “obtaining the ITC is no longer a guarantee under applicable safe harbor provisions.” This affects one of Applicants’ core arguments for granting a waiver, which was that the delay associated with competitive bidding risked loss of the federal ITC which helped make the Project cost effective.

“These RDG-PPA projects have transformed the renewable energy procurement market in Hawaii by demonstrating that competitive bidding can result in PPAs that provide firm, dispatchable renewable energy and ancillary grid services at increasingly lower prices,” the PUC wrote.

“To be clear, this is not to say that the Hu Honua Project is irrelevant or that biomass resources do not have place in Hawaii’s renewable energy portfolio,” said the PUC. “The pertinent issue here is whether this particular Project should be exempted from competitive bidding against other renewable projects to determine the best value for HELCO and its customers. The Commission is aware that biomass resources offer different considerations than other renewable resources, such as solar and wind, but believes that these distinctions are better weighed and addressed in the context of the Competitive Bidding Framework.”

Meanwhile, in its own filing with the Commission on the same day as the order, attorneys for the Hū Honua Bioenergy project wrote that the ongoing delays in the PUC proceeding have “substantially and negatively” impacted the project.

“Hu Honua has invested well over $350 million to develop the Project, and
the monthly carrying costs are approximately $2.6 million,” wrote Dean and Wil Yamamoto for the Yamamoto Caliboso firm on behalf on Hū Honua. “Accordingly, each month of Project delay results in additional cost impacts and further jeopardizes existing jobs, project financing, and all of Hu Honua’s investments…”

While Hu Honua has thus far avoided layoffs and ensured that its people remain employed and compensated, this cannot continue indefinitely. Hu Honua has maintained current staffing levels since May 2019, following the Hawaii Supreme Court’s remand of this matter for further Commission proceedings (“Supreme Court Remand”), with the understanding that the Commission proceedings would progress in a timely manner. During the COVID-19 crisis, as unemployment across the state has sky-rocketed, Hu Honua believes it is important to ensure continued employment for its staff. However, the continued delay of this proceeding jeopardizes the good paying jobs and other important benefits, such as medical coverage, of approximately 38 people employed in connection with Hu Honua’s current operations. In addition, the harvesting of feedstock in anticipation of commencing operations has been ongoing for several months, creating dozens of jobs in forestry on Hawaii Island. In total, the continued delays in this proceeding jeopardize well in excess of 50 jobs on Hawaii Island.