HAWAIʻI - On Monday, the State of Hawaiʻi reported the deaths of three more residents from coronavirus, and Governor Ige said he will be extending the 14-day transpacific travel quarantine to the end of August. 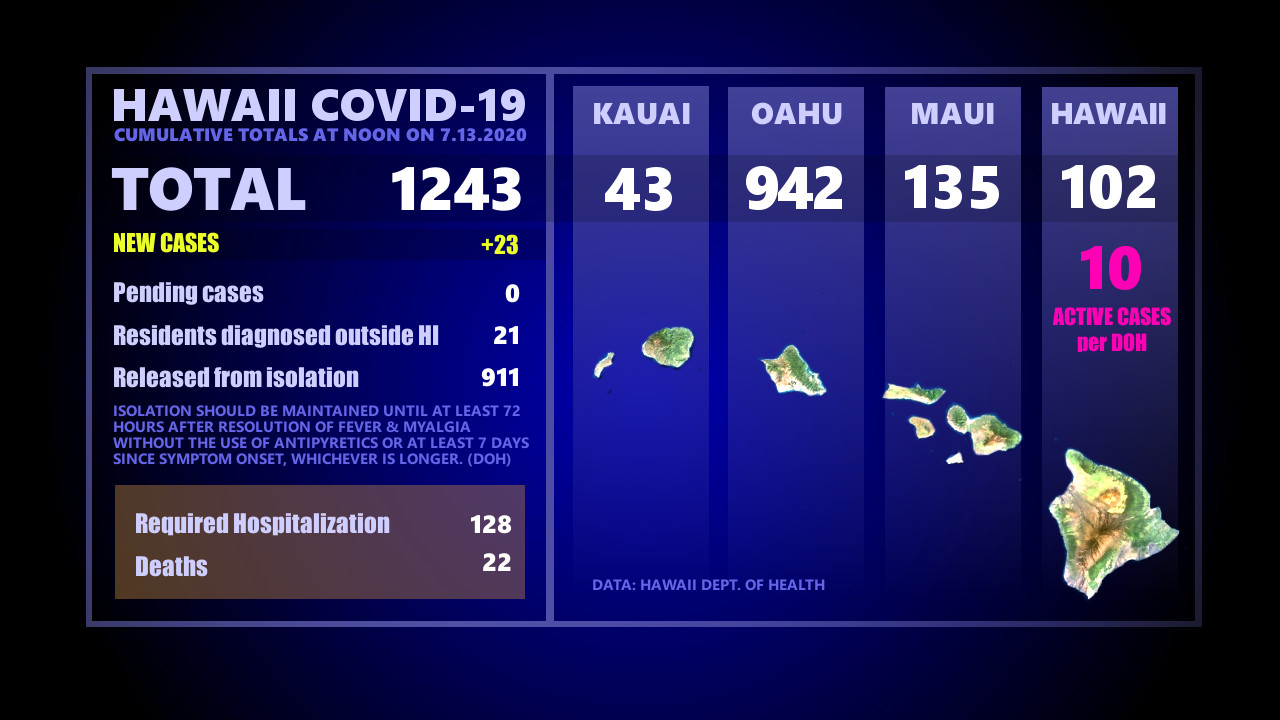 (BIVN) – There were 23 newly reported cases of COVID-19 in the State of Hawaiʻi today, and three (3) new deaths were announced.

UPDATE – (1 p.m.) – Kona Community Hospital today confirmed that on Friday, an employee was positively diagnosed with COVID-19. The employee is now quarantined at home. No additional employees have tested positive, the hospital says. “Per hospital protocols, nursing is in the process of tracking and testing any employees who may have been in contact with the staff member,” said Interim Chief Nurse Officer Stephanie Irwin, RN, MSN.

“Kona Community Hospital works closely with our federal, state, and county partners to manage and respond to coronavirus cases as they arise,” said Infection Prevention and Employee Health Director, Lisa Downing, RN. “The health and safety of our staff and patients is our utmost priority.”

A tragic reminder of the impact of COVID-19 on individuals and their families are the deaths of three more Hawai‘i residents from coronavirus. The Department of Health’s (DOH) Disease Outbreak Control Division (DOCD) reports an elderly Kaua‘i resident is the 22nd recorded COVID-19 death. This person died out of state, in Arizona, where he had been receiving treatment for several months for underlying medical conditions. The 21st fatality was also reported by DOCD over the weekend. This female died in an O‘ahu hospital Sunday morning and had previously been a resident of a care home. Today DOCD confirmed the 20th death, which occurred on July 7th, as an elderly O‘ahu man with underlying medical issues. His death was added after a review of his health history and discussions with his primary care physician.

State Health Director Dr. Bruce Anderson said, “We all extend our heartfelt sympathies to the family and friends of these three people. The best tribute to their lives and to the lives of all 22 people who’ve lost the fight against coronavirus, is getting everyone in Hawai‘i to take personal responsibility for their own health and the health of everyone around them.”

Most of the 86 additional cases recorded since last Friday are in previous clusters associated with “community-spread.” For example, a total of 44 cases are associated with a training activity at Hawaiian Airlines, in which a person infected during these meetings, is linked to a cluster of 20 cases involving two O‘ahu gyms. According to State Epidemiologist Dr. Sarah Park, “This clearly shows how easily and quickly this virus can spread from person-to-person and from place-to-place when people are not practicing physical distancing, not wearing masks, not staying home when sick, and possibly not washing their hands frequently and thoroughly.” Health experts urge individuals and our community as a whole to maintain safe practices and encourage others to do so to prevent the continuation of a spike in cases. Saturday had the greatest single day number of reported cases (42) since DOH began tracking cases in late February.

Other clusters, where community-spread is clearly the cause of additional cases, are pau hana gatherings, businesses, urgent care and long-term care facilities, and household clusters associated with social interactions (birthday parties, Father’s Day, 4th of July and religious functions).

“While the majority of Hawai‘i’s residents are using safe practices, clearly there are some who are not, and frankly unless everyone pays attention, we’ll unfortunately continue to see illnesses and deaths associated with COVID-19. Personal responsibility is the way we’ll again flatten the curve and retain Hawai‘i’s leadership through this unprecedented public health crisis. The upward trend of cases not only impacts people’s health but will likely delay our state’s economic recovery,” Anderson said.

Also on Monday at noon, the Hawaiʻi Department of Health reported one (1) new case on Hawaiʻi island, and said that 92 of the 102 cumulative cases on the Big Island have been released from isolation, meaning that the remaining ten (10) cases are active.

This morning, the Hawaiʻi County Civil Defense reported eight (8) actve cases on Hawaiʻi island. “Of this, two are new cases and identified as travel related,” County officials said. “It is so important that in traveling to the mainland, or hosting someone from the mainland, that you exercise caution. Know that the conditions in most of the mainland states continue to see a high rate of increases of people being infected by the virus.”

Civil defense reminded the public that “wearing of face coverings is mandatory on Hawaii Island.”

Governor David Ige appeared Monday on an online informational briefing held by the Hawaiʻi House Select Committee on COVID-19 Economic and Financial Preparedness, where he said that the State will be extending the 14-day transpacific travel quarantine to the end of August. He said he expects to make an official announcement on that issue later today. A media briefing has been scheduled for 2:30 p.m.

Yesterday, 2,215 people arrived in Hawaii. During this same time last year approximately 35,000 passengers arrived in Hawaii daily, including residents and visitors. The state’s mandatory 14-day self-quarantine started on March 26th for all passengers arriving in Hawaii from out of state. This table shows the number of people who arrived by air from out of state yesterday and does not include interisland travel. This data was collected from the Hawaii Department of Transportation’s (DOT) Mandatory Travel Declaration Form.