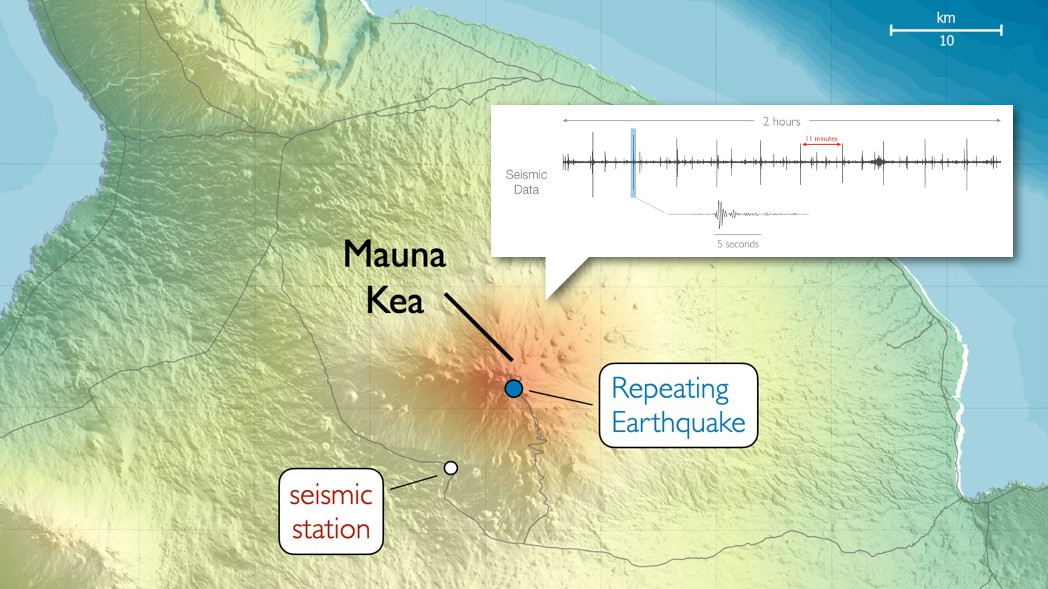 Example 2-hours of seismic data from station near Mauna Kea on April 14, 2020. The large spikes are earthquakes under Mauna Kea repeating every ~11 minutes. Bottom waveform zooms in on 15 seconds of an individual event. (USGS graphic, altered by BIVN to include inset seismic data inset over map.)

MAUNAKEA, Hawaiʻi - Mauna Kea is not erupting, but scientists say "it has been hiding one of the most unique seismic signals seen at any volcano."

(BIVN) – Maunakea – Hawaiʻi island’s iconic, 13,803 ft. high shield volcano – is not erupting, and its current alert level is GREEN. However, there are deep repeating earthquakes occurring below the mountain. The activity is the subject of the latest Volcano Watch article, this week written by Alaska Volcano Observatory seismologist Aaron Wech:

Mauna Kea volcano hasn’t erupted in over 4,500 years, but that doesn’t mean it’s quiet. In fact, for decades it has been hiding one of the most unique seismic signals seen at any volcano.

Some discoveries are just serendipity. Several years ago, U.S. Geological Survey seismologists at the Hawaiian Volcano Observatory and Alaska Volcano Observatory were trying out a new method to track seismicity at Kīlauea Volcano. The method scans 24-hour sections of seismometer data looking for signal similarity on many instruments. Out of curiosity, they decided to look at the rest of the Island of Hawaiʻi to see what else they might find.

What they found came as a surprise. A study published in the journal Science in May, 2020 describes how they detected deep earthquakes beneath Mauna Kea that repeat every 7–12 minutes. Noise in the seismic records from wind and nearby cars, together with the small size of the individual earthquakes (magnitude 1.5), had prevented these earthquakes from being detected with the regular earthquake detection system.

Example 2-hours of seismic data from station near Mauna Kea on April 14, 2020. The large spikes are earthquakes under Mauna Kea repeating every ~11 minutes. Bottom waveform zooms in on 15 seconds of an individual event. (USGS)

The small, repeating earthquakes occur at depths of about 20–25 km (12–15 mi) directly beneath Mauna Kea’s summit and happen every 7–12 minutes with surprising regularity. Furthermore, the repeating events can be detected going back to at least 1999. This was when a particularly quiet seismic station was installed in the saddle between Mauna Kea and Mauna Loa. It is very likely that the repeating earthquakes were occurring even further back in time.

Scientists were initially cautious to interpret the earthquakes as due to volcanic processes, because the regularity seemed man-made. It took a long period of investigation to rule out all of the possibilities, such as activity at the Pōhakuloa Training Area or road construction. But eventually it became clear that these earthquakes were telling us something important about Mauna Kea.

Low-frequency earthquakes aren’t unusual at volcanoes, but there’s no other example of this kind of repetition or longevity anywhere in the world. Ultimately over 1 million earthquakes were found from 1999–2018. Summing the energy release of the earthquakes gives a total that is equivalent to a magnitude-3 earthquake under Mauna Kea every day.

Adding together the signals of thousands of these earthquakes allows the waveform to be examined in greater detail, and the results suggest the events are caused by the movement of fluids above a deep magma chamber. As the fluids ascend, they enter a crack that is sealed at the top. The continuous flow of fluid will pressurize the crack, eventually breaking the top seal and creating the earthquake. The crack then reseals, and everything starts over again.

So where do these fluids come from? To get earthquakes every 7–12 minutes for decades requires a near-constant supply of fluids. The source is likely magmatic gases that behave like fluids when they are deep within the Earth’s crust. These gases separate from the magma as it cools. Large magma bodies cool over hundreds to thousands of years, so this process provides a long-term, nearly continuous supply of fluids to repeatedly drive deep earthquakes beneath Mauna Kea.

Under this interpretation, the fluids are produced from magma cooling in place. There is no evidence (from this study or other work) that magma is rising under Mauna Kea. So while this study provides important insight into processes beneath the volcano, it does not change estimates of volcanic hazard at Mauna Kea. We expect any opening of a new conduit will be accompanied by swarms of shallow earthquakes to provide advanced warning of impending eruptive activity.

The earthquakes nonetheless underscore that Mauna Kea is classified as an active volcano. Although interpretations can change with new data, the deep low-frequency earthquakes likely serve as a reminder that there is still magma down there, just chillin’.

The intro to this article was corrected to include clarifying details.