video from the 11 a.m. media briefing with the Central Pacific Hurricane Center, edited by BIVN 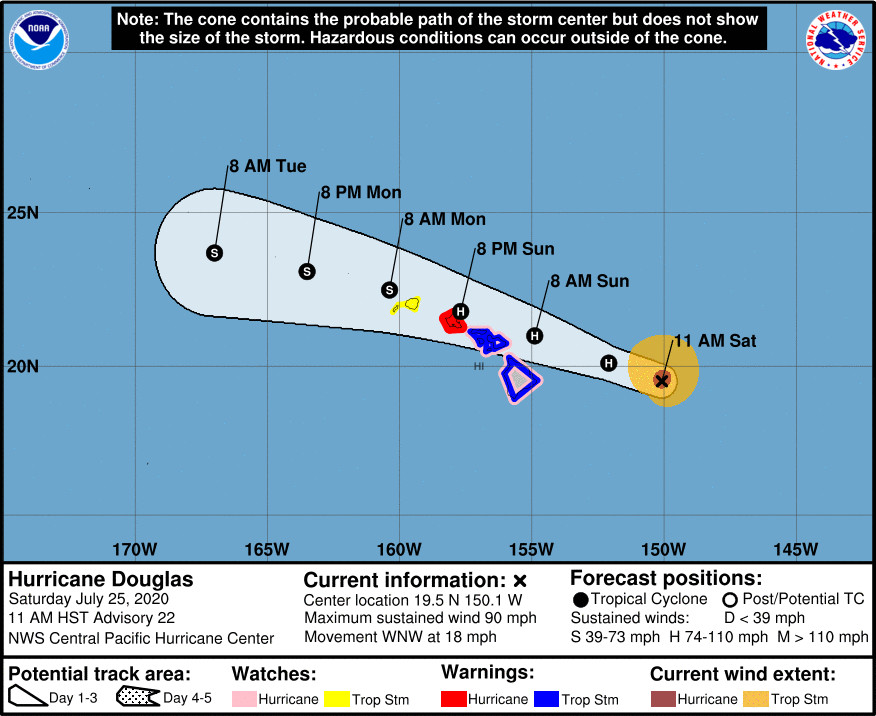 (BIVN) – Hurricane Douglas is 325 miles east of Hilo, and moving west northwest at 18 mph. The storm’s maximum sustained winds are near 90 mph with higher gusts. Gradual weakening is expected through the weekend. However, Douglas is still forecast to be near hurricane strength when it  nears the islands, the Central Pacific Hurricane Center says.

For Hawaiʻi island, a Hurricane Watch and a Tropical Storm Warning remain in effect. A Flash Flood Watch and a High Surf Warning are also in effect.

On the forecast track, Douglas will be near the main Hawaiian Islands late tonight and will move over parts of the state Sunday and Monday.

Hurricane Douglas presently looks to be tracking north of Hawaiʻi island. “The Big Island is probably going to be spared the worst of this system,” said Robert Ballard, a Science and Operations Officer with the Central Pacific Hurricane Center. “Nevertheless, though, if there were a left-side wobble, we could still see really destructive conditions reach the Big Island. So I don’t want folks there to completely let their guard down. And we have left the Hurricane Watch in effect.”

SURF: Large swells generated by Douglas are expected to affect the Hawaiian Islands during the next couple of days, and storm surge of 2 to 4 feet above normal tides is expected near the center of Douglas. The large swells and surge will produce life threatening and potentially destructive surf along exposed shores.

RAINFALL: Heavy rainfall associated with Douglas is expected to affect portions of the main Hawaiian Islands from late tonight through Monday. Total rain accumulations of 5 to 10 inches are possible from Maui County westward to Kauai County, with the greatest amounts in elevated terrain. This rain may result in life-threatening flash flooding and land slides, as well as rapid water level rises on small streams. Douglas is expected to produce 2 to 5 inches of rainfall over the northern half of the Big Island.

The satellite presentation of Douglas is degrading somewhat, likely due to restricted outflow to the south and 26C SSTs. The U.S. Air Force 53rd Weather Reconnaissance Squadron sampled the hurricane this morning, and a blend of SFMR, flight level winds, and dropsonde data from two passes supports decreasing the intensity to 80 kt with a central pressure of 984 mb.

Douglas continues to move toward the west-northwest (290 deg) at 16 kt. Douglas is being steered by a low- to mid-level ridge to the northeast and is nearing a weakness in the mid-level ridge. A continued motion toward the west-northwest and a slight decrease in forward motion will bring Douglas over or very near portions of the main Hawaiian Islands on Sunday. On Monday, a mid-level ridge is forecast to build to the north of Douglas, potentially inducing a turn toward the west, with some increase in forward speed. The updated forecast track is very close to the previous forecast and lies close to the ECMWF toward the southern end of a rather tightly clustered guidance envelope.

Weakening is expected through the forecast. Douglas will remain over an area of 26C SST today, which is expected to continue the gradual weakening trend. SSTs along the forecast track increase tonight, at the same time that Douglas will move into an area of increased vertical wind shear. This is expected to maintain a weakening trend, although at a fairly slow rate. The official intensity forecast has changed very little from the previous advisory, and generally follows a blend of the corrected consensus and statistical model guidance.

1. Douglas continues to approach the main Hawaiian Islands, potentially passing dangerously close to, or over, the islands late tonight through Sunday night. The close passage of Douglas brings a triple threat of hazards, including but not limited to damaging winds, flooding rainfall, and dangerously high surf, especially along east facing shores.