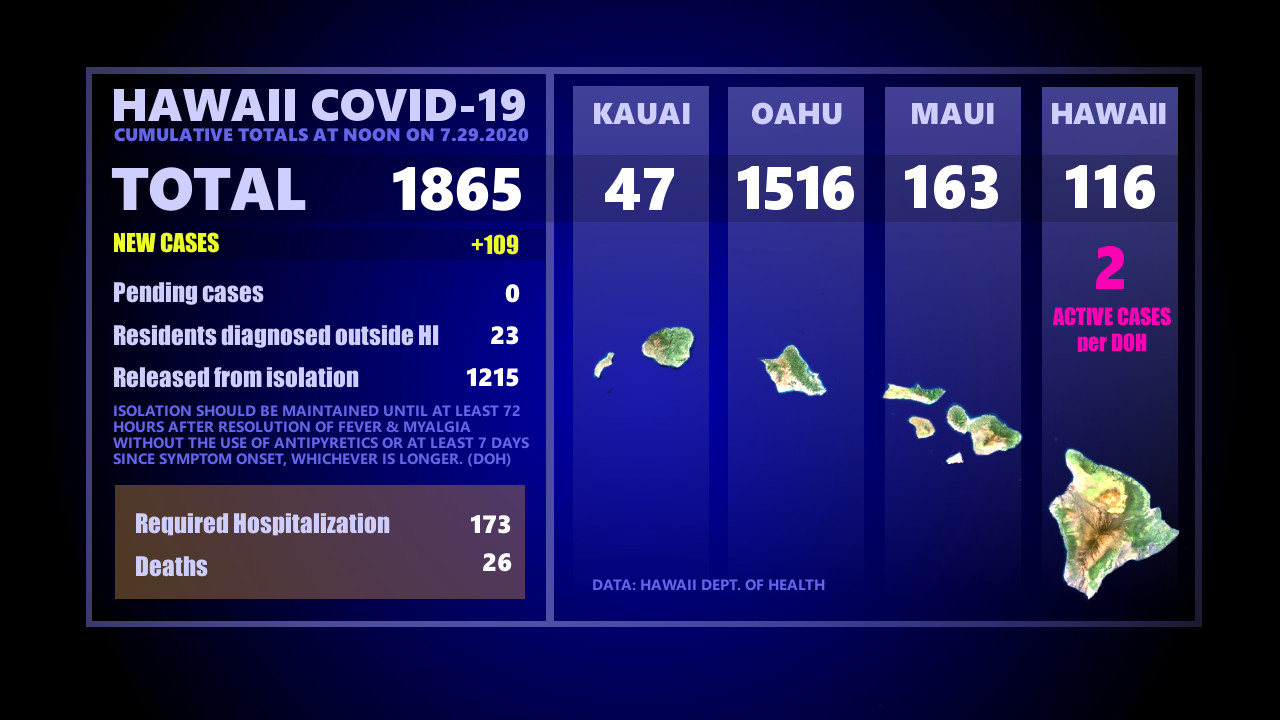 HAWAIʻI - A new record number of COVID-19 cases for Hawaiʻi has been reported today, thanks in part to testing delays due to Hurricane Douglas.

(BIVN) – The State of Hawaiʻi on Wednesday reported a new record number of COVID-19 cases in a single day, with a total of 109.

Of that total, the Hawaiʻi Department of Health says ninety-eight (98) were identified on Oʻahu, nine (9) on Maui, and two (2) on Kauaʻi.

There were no new cases identified on Hawaiʻi island. The health department indicated today that there are only two (2) active cases on the Big Island.

The State says it had been anticipating the increase due to lab closures on Sunday and Monday after Hurricane Douglas. A total of 5,160 tests were processed between Saturday and today, health officials say. Normally, about 1,000 to 2,000 tests are processed each day.

“The dramatic increase in cases reported today was anticipated based on recent trends since the Fourth of July weekend, which continue,” said State Health Director Dr. Bruce Anderson in a morning news release. “We are seeing an increase in small and large social gatherings, including gatherings on beaches and in our parks, at homes and in workplaces. We have also recently seen an increase in cases associated with bars, gyms other establishments where physical distancing and masking is not regularly practiced.”

“Based on data collected on cases through our investigations and contact tracing, we are recommending that strategic actions be taken to further restrict activities associated with these cases,” said Anderson. Venues where multiple clusters have been identified, such as in bars and gyms, will obviously be targeted, said Anderson.

State officials added that Hawaiʻi anticipates schools to re-open, “our children are going to need to look to adults to set an example and we can’t let out guards down right now.”

Governor David Ige will hold a media briefing today at the State Capitol at 1 p.m. He will be joined by Dr. Anderson and Lt. Governor Josh Green.

Mayor Harry Kim will also be holding a press conference on Facebook Live today at 2 p.m.

Yesterday, 2,255 people arrived in Hawaii. During this same time last year approximately 35,000 passengers arrived in Hawaii daily, including residents and visitors. The state’s mandatory 14-day self-quarantine started on March 26th for all passengers arriving in Hawaii from out of state. This table shows the number of people who arrived by air from out of state yesterday and does not include interisland travel. This data was collected from the Hawaii Department of Transportation’s (DOT) Mandatory Travel Declaration Form.