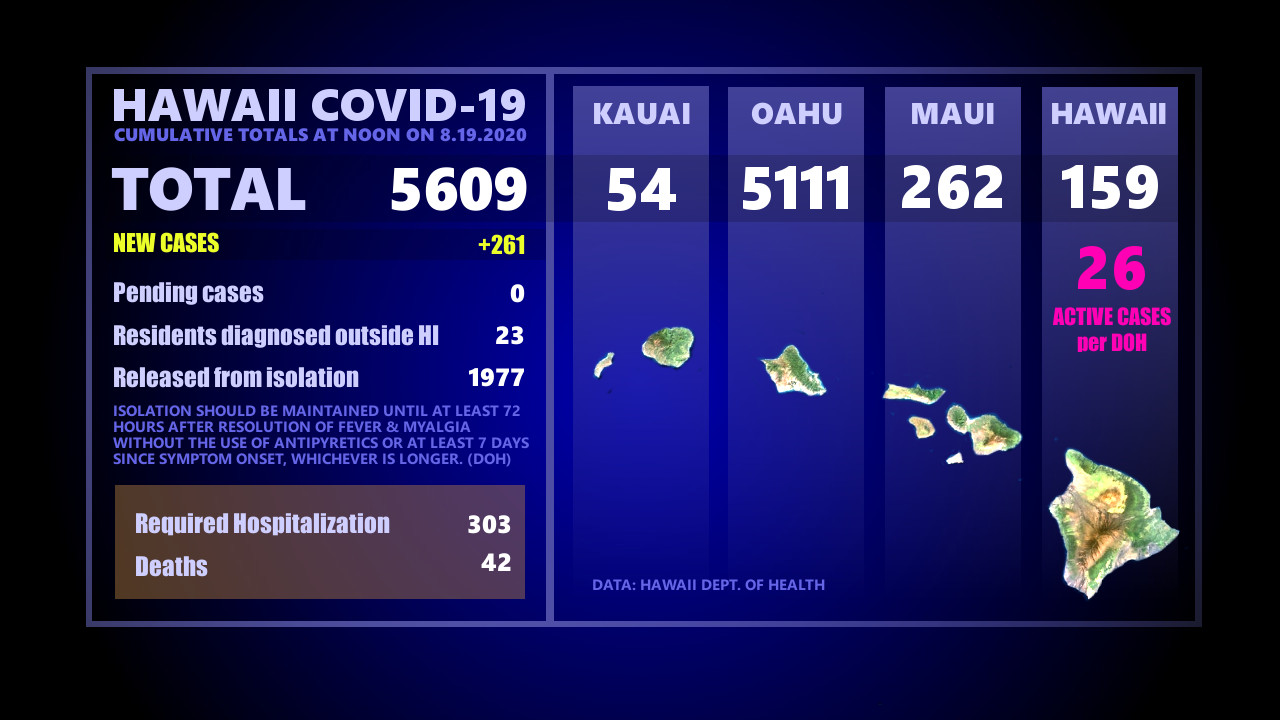 HAWAIʻI - The number of new cases went up today, compared to the 134 reported the day before. The death count has also increased.

(BIVN) – There were 261 newly reported cases of COVID-19 in the State of Hawaiʻi, health officials reported at noon on Wednesday. There were also two new deaths reported.

There were twenty-one (21) cases on Maui, and seven (7) new cases on Hawaiʻi island. The remaining 234 were identified on Oʻahu.

Of the 159 cumulative cases on Hawaiʻi island, 133 cases have been released from isolation, indicating that the remaining 26 are active cases.

234 of the newly reported COVID-19 cases today are on O‘ahu, with seven (7) on Hawai‘i island and twenty (20) from Maui for a total of 261 new cases. Of the new cases today, 56 are attributed to the cluster of cases at OCCC, and 37 positive results from yesterday are included today due to laboratory reporting delays. DOH is reporting two additional deaths of an O‘ahu man and woman, both over 60-years-old. Other details are pending. The coronavirus death toll is now 43. DOH believes that while numbers appear to be plateauing, it is too early to see trends related to new restrictions announced recently. The department also notes that today’s higher case count is partially due to transmission issues with a mainland laboratory’s Electronic Lab Reporting (ELR), over the past two days. Those issues have now been resolved.

Health director Dr. Bruce Anderson commented on the possibility of a  plateau in the number of new cases.

Dr. Anderson said 56 of today’s reported cases are associated with the cluster at the O‘ahu Community Correctional Facility and 37 that were not reported yesterday due to the lab reporting backlog. Anderson said, “Subtract those out… still significant but fewer than we projected a week ago. Our statewide hospital census is stable and we are not experiencing any crisis situations in any of our hospitals.” He said he remains confident that with new restrictions on gathering and enhanced enforcement we’ll see case numbers drop in the next several weeks.

According to the Hawaiʻi Tourism Authority:

Yesterday, 2,080 people arrived in Hawaii. During this same time last year approximately 35,000 passengers arrived in Hawaii daily, including residents and visitors. The state’s mandatory 14-day self-quarantine started on March 26th for all passengers arriving in Hawaii from out of state. This table shows the number of people who arrived by air from out of state yesterday and does not include interisland travel. This data was collected from the Hawaii Department of Transportation’s (DOT) Mandatory Travel Declaration Form.