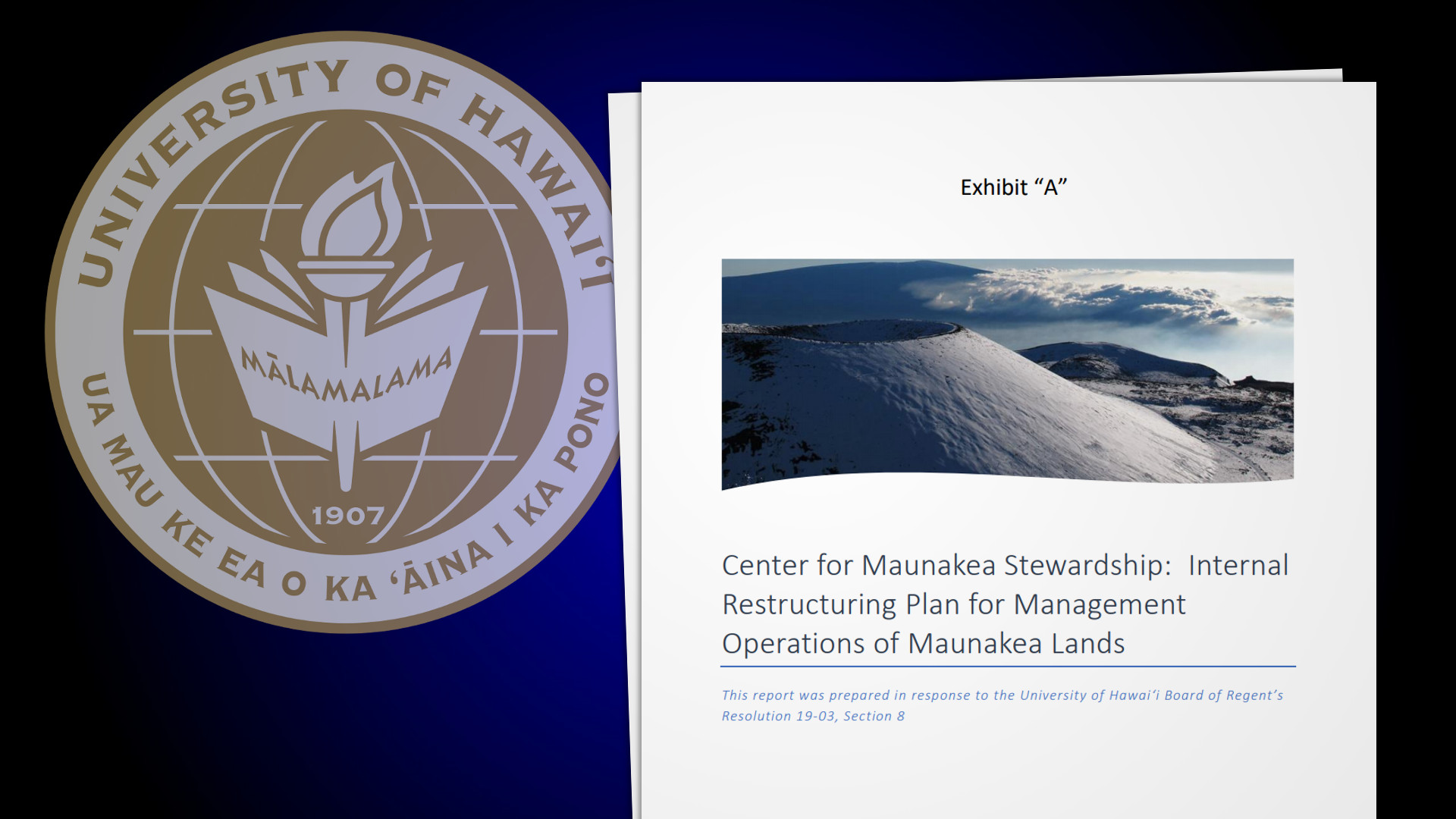 HAWAIʻI - The University of Hawaiʻi Board of Regents have today approved a revised plan to restructure the internal management of UH-managed lands on Maunakea. 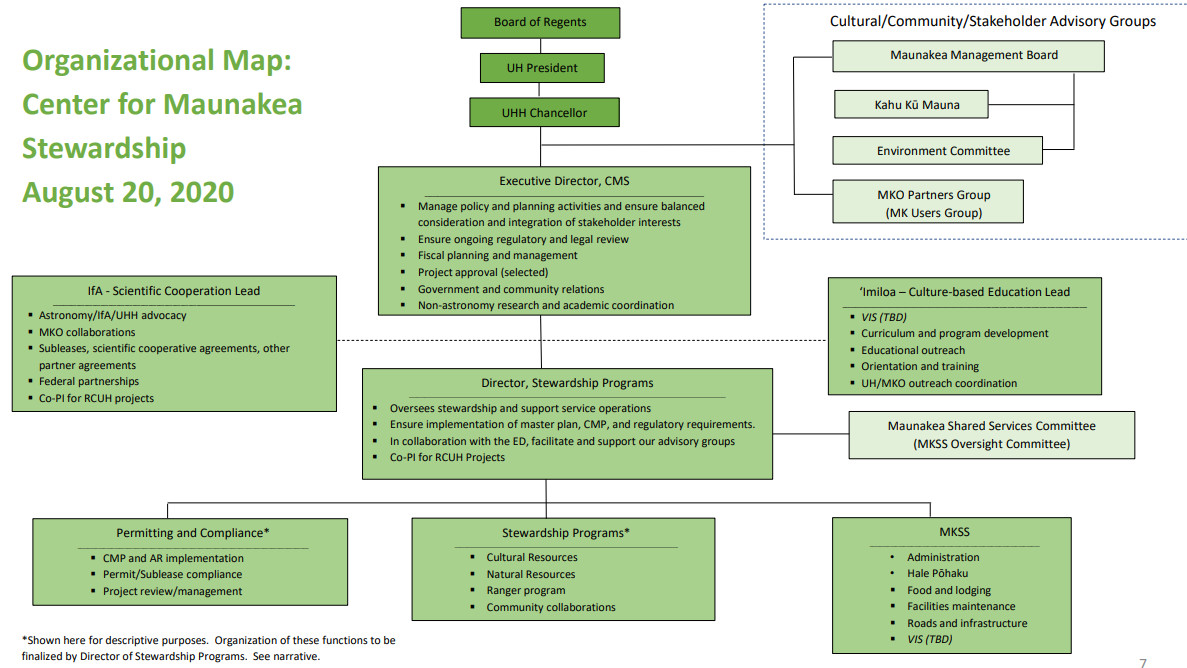 from the UH Board of Regents meeting materials for August 20, 2020.

(BIVN) – The University of Hawaiʻi system announced today that a restructuring of the internal management of UH-leased lands on Maunakea has been approved. From the university:

After months of consultation with internal and external stakeholders, the University of Hawaiʻi Board of Regents (BOR) approved a revised plan to restructure the internal management of UH-managed lands on Maunakea at the August 20 BOR meeting. The plan covers all operating and advisory units associated with Maunakea, establishes clearer lines of accountability, and improves transparency within UH’s management operations.

The new internal management structure creates a new lead organization called the Center for Maunakea Stewardship (CMS) that will report directly to the UH Hilo chancellor. CMS will be accountable and responsible for the strategic implementation of stewardship programs, planning, permitting, compliance oversight, outreach, and research and academic coordination, as well as for fiscal planning and management. The new structure calls for combining the Office of Maunakea Management and Maunakea Support Services, while clarifying collaborative roles for the Institute for Astronomy and ʻImiloa Astronomy Center.

“While this restructuring provides for improved coordination between our management functions, the real opportunity here is that it moves us further toward an ethic of stewardship,” said Greg Chun, UH Executive Director of Maunakea Stewardship. “Maunakea is a unique and special place that has been entrusted to our care, and is valued by a diverse community in diverse ways. Every activity undertaken on the mauna must be planned and managed with care, balance, and attention to the diverse values the community brings to Maunakea. Bringing our management responsibilities under a centralized organization supports building this ethic throughout the organization.”

The revised management structure addresses key elements of internal restructuring that resolves concerns raised in public testimony to the BOR at its May meeting. The updated version is intended to centralize leadership under the Executive Director and CMS, organize around mission-central activities, and optimize existing UH and Maunakea Observatories (MKO) resources, competencies, and relationships through collaborations and networks. An MKO Partners Group would also be established to provide input into decisions made by the university. Under the restructuring plan, advisory groups will be integrated into strategic planning and policy discussions.

The revisions were developed after receiving feedback from the Maunakea Management Board, the Kahu Kū Mauna Native Hawaiian advisory council, MKOs, elected and appointed officials, and public input provided during our rule-making hearings and at BOR meetings over the last several years.

Management of Maunakea continues to be a controversial subject, with divergent viewpoints even among those who opposed the restructuring plan; for example, some testifiers expressed opposition to centralizing control on Hawaiʻi Island, while others called for even greater control by entities on Hawaiʻi Island. “It is important to note that while the input collected informed the development of this proposal, it does not mean that the consulted parties agree with or support the restructuring as laid out,” said Chun. “The plan integrates many ideas, concerns, and interests that were heard during the consultation process while keeping true to the objectives of increasing transparency and accountability set forth by the BOR. It reflects our best assessment of how to balance what have been diverse and sometimes conflicting ideas on how to organize management.”

The restructuring plan is one of 11 action items required by the November 2019 BOR resolution directing UH leadership to strengthen its stewardship of Maunakea and is responsive to a recent fiscal review conducted by the UH Office of Independent Audit.

Upon BOR approval, the restructuring plan will be implemented over the next year, taking into account COVID-related budget limitations.