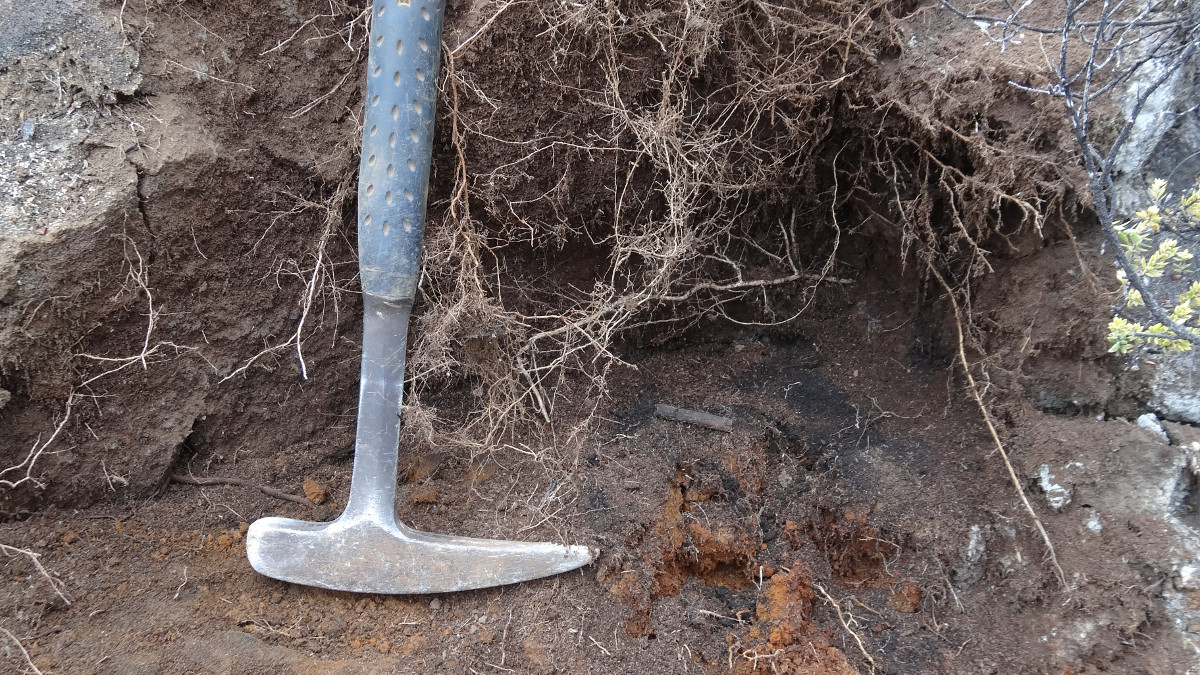 INSET of USGS photo: "Charcoal collected from under the base of a pāhoehoe flow in a black sooty zone over orange ash. The black sooty zone represents the region where the vegetation was converted to charcoal. The hammer is approximately 13 inches long." USGS photo by F. Trusdell.

One of the fundamental premises of geology is that the “key to understanding the future is to understand the past.” In order to forecast how a volcano will behave, geologists must map the deposits from past eruptions and determine the ages of those deposits. Radiocarbon dating is our principal tool of use.

Radiocarbon ages are expressed in “years BP” (Before Present). Present is the year 1950 because after that date nuclear weapons testing has contaminated the atmosphere with excess Carbon-14 (14C).

Radiocarbon dating was initiated in Hawaii by Meyer Rubin, a revered U.S. Geological Survey colleague, who unfortunately passed away in May—a victim of COVID-19. Rubin was a pioneer in developing 14C dating techniques, working as a student at the University of Chicago with Nobel Prize winner Willard Libbey. Meyer began his work with the U.S. Geological Survey in Washington, D.C., working with Hans Suess to refine radiocarbon dating by converting the carbon in solid samples to a gas to provide better counting statistics and thus higher quality data.

Meyer Rubin was instrumental in bringing radiocarbon dating to Hawaii and making this technique accessible to geologists. The first radiocarbon samples used to date flows in Hawaii were collected in 1955 and dated in 1958. The samples were accidental finds, from Hilo, after a bulldozer cleared some land revealing carbonized plant materials. The first sample was from an ʻōhiʻa tree and yielded an age of 2,000 ± (plus or minus) 250 yrs BP. A second sample, from hāpuʻu, gave an age of 2,070 ± 250 BP. These ages were internally consistent, met stratigraphic criteria, and thus, yielded a reliable age of the flow. 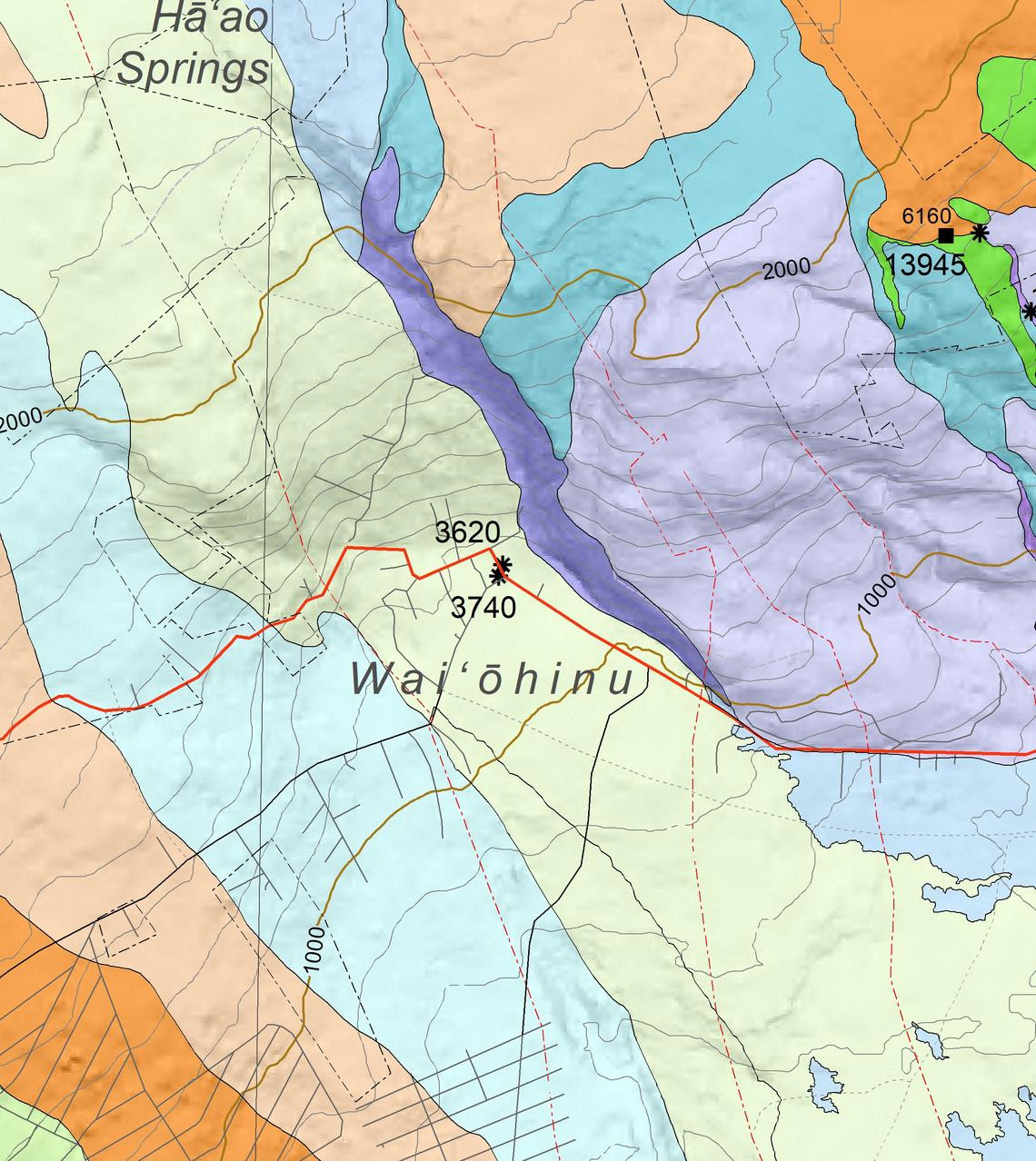 USGS: Map of Waiʻōhinu area, Island of Hawaiʻi, showing the location of the 3,740 year old age.

It wasn’t until the early 1970s, however, that a systematic and methodical approach to charcoal recovery in Hawaii commenced. This effort was spearheaded by John “Jack” Lockwood and Peter Lipman. In a paper published in 1980, the authors stated, “After extensive field observation of prehistoric and historic lava-flow basal contacts, we gradually developed field guidelines to predict areas of charcoal preservation and can now find carbonized wood under most Hawaiian lava flows that extend into vegetated areas.”

Prior to 1974, only 11 lava flows from Mauna Loa and Kilauea had been dated by the radiocarbon method. Soon—with new understandings of how charcoal is formed—geologists began to collect charcoal in earnest to uncover the secrets of Pele. So far, on the Island of Hawaiʻi, we have gathered over 1,500 charcoal samples and obtained more than 1,000 radiocarbon ages. About half of the dated material is from Mauna Loa volcano. The methodology used to recover charcoal in Hawaii is applicable to young volcanic terranes around the world.

How does radiocarbon dating work? Most carbon is not radioactive, but one isotope, 14C, is radioactive and has a half-life of 5,700 years. 14C is produced by radioactive decay of nitrogen and is readily utilized by plants to build tissue, fiber, and wood.

The quantity of 14C in the plant continuously diminishes through radioactive decay, so that after 5,700 years the amount of 14C is 50% of the amount when incorporated into plant tissue. After another 5,700 years, the concentration is down to 25% of its initial amount. Scientists use this decay to get an age from charcoal. The relatively new accelerator mass spectrometer techniques can theoretically provide ages between 80 and 100,000 years.

Realistically, radiocarbon dating is good to about 50,000 years BP. The discovery of using charcoal to date young volcanic processes, through radiocarbon, has allowed us to evaluate the geologic history of the Island of Hawaiʻi. Thanks to the late Meyer Rubin, Jack Lockwood, and Peter Lipman, the use of radiocarbon dating has revolutionized our ability to firmly establish eruption frequency, unearth the periodicity of hazards, and assess risk. For dating young lava flows, “Radiocarbon Dating” has proven to be a Rosetta Stone for understanding the histories of Hawaii’s volcanoes!