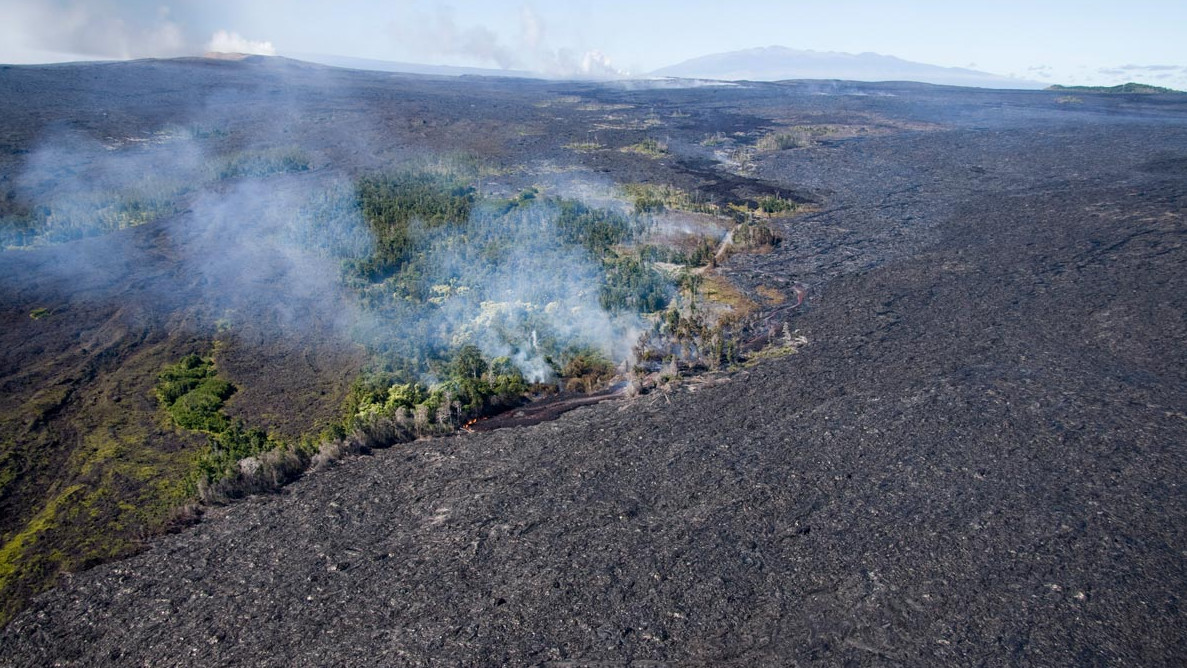 Aerial photograph showing the distal western branch of the Thanksgiving Eve Breakout (TEB). This flow was active on the western side of the TEB flow field, near the top of the Royal Gardens subdivision and east of Puʻu ʻŌʻō. The Puʻu ʻŌʻō cone and gas plume are visible in the upper left of the image and the TEB vent plume is visible in the upper center. Mauna Kea is visible in the background. USGS photo taken on January 19, 2010.

HAWAIʻI ISLAND - Although the "TEB" flow was much less destructive than the 2018 eruption of Kīlauea, it nevertheless threatened homes in lower Puna for months.

(BIVN) – This week’s Volcano Watch article, written by U.S. Geological Survey Hawaiian Volcano Observatory scientists and affiliates, was released a day early due to the Thanksgiving holiday. The story looks back on an eruptive event that started just before 2007 Thanksgiving holiday. From the USGS HVO:

Recall this lava flow crisis from years ago: lava breaks out of the normal confines of the long-lived Puʻu ʻŌʻō eruption, with flows advancing relentlessly towards residential areas downslope. Over several months, the USGS Hawaiian Volcano Observatory and County of Hawai‘i Civil Defense Agency monitor the hazards closely in lower Puna as the situation evolves.

While this scenario describes the highly destructive 2018 eruption on the lower East Rift Zone (LERZ) of Kīlauea, it also pertains to an earlier event on the East Rift Zone: the Thanksgiving Eve Breakout (TEB) lava flow in 2007.

Although the TEB flow was much less destructive than the 2018 LERZ eruption, it nevertheless threatened homes in lower Puna for months. The TEB episode also bore important lessons on lava flow hazards that are worth considering in any future rift zone eruption in Hawaii.

By late 2007, the Puʻu ʻŌʻō eruption, on the middle East Rift Zone of Kīlauea Volcano, was already 24 years old and showed no signs of slowing down. A new vent had formed in July just east of Puʻu ʻŌʻō cone, with lava heading north of the rift zone, forming a large perched lava channel during September through November.

Early on November 21, the day before Thanksgiving, lava broke out of the vent area on the south flank of the elevated lava channel, and the slope of the channel levees helped direct lava towards the south.

The new TEB flow slowly advanced downslope towards the south, with the pāhoehoe lava forming a lava tube as it moved. The flow cut through the remains of Royal Gardens subdivision on its course to the ocean.

The TEB flow reached the coastline, just west of Kalapana, in March 2008. Its lava tube remained active for three years, supplying lava to ocean entries (including the long-lived Waikupanaha entry). The consistent supply through the tube allowed the flow to gradually widen on the low slopes of the coastal plain.

In mid-2010 the eastward expansion of the flow began threatening Kalapana Gardens subdivision. The subdivision had been covered by lava flows in 1990, with subsequent rebuilding in later years. Between July 2010 and January 2011, a slow-motion lava flow crisis destroyed three homes, while threatening many more.

Eventually, a backup of magma in the system near Puʻu ʻŌʻō drove rising pressure, which then caused an intrusion and new vents to form west of Puʻu ʻŌʻō in March 2011. Within weeks, however, activity shifted back to Puʻu ʻŌʻō, and it continued with its eruptive activity from new vents for another 7 years.

What can we learn from the TEB episode 13 years ago? The main takeaway is that a minor shift in vent position on the rift zone can cause a major change in lava flow direction and the resulting hazard.

When the TEB breakout started, it moved the vent location by just a stone’s throw, and yet it shifted the entire thrust of the flow from north to south. The precise location of a vent relative to the axis of the rift zone, which forms a subtle ridge, can determine which side of the ridge the flows descend. This was also a factor in why lava flows headed northeast during the 2014–2015 Pāhoa lava flow crisis.

The TEB flow also shows how an eruption can build new features on the rift zone, like lava channels and lava shields, that can influence subsequent flow direction. More recently, during the 2018 LERZ eruption, lava from early fissures built up new topography that contributed to the destructive fissure 8 flow focused northeast towards Kapoho subdivisions. The early lava kept the fissure 8 flow from moving southeast towards less populated areas.

These examples illustrate why the opening hours or days of a rift zone eruption are so consequential for hazards, both for Kīlauea and Mauna Loa. When an eruption starts, geologists must keep a close eye on the position of fissures relative to the rift zone axis. And they must be on the lookout for growing features like lava channels or shields that may shunt subsequent lava in a new direction.

The 2007 TEB episode of the Puʻu ʻŌʻō eruption, and rift zone events since then, are a reminder that big changes in hazards can hinge on small changes at the vent.