Hawaiʻi Economic Recovery May Be Slowing

HAWAIʻI - The UHERO executive director presented an update to the House Select Committee on COVID-19 Economic and Financial Preparedness.

(BIVN) – After Hawaii saw a bump-up in positive economic indicators in November, things appear to be slowing down again.

During a virtual meeting of a House Committee on Monday, Carl Bonham, the Executive Director of the University of Hawaii Economic Research Organization, delivered this update”

Bonham: “Three, four weeks ago … we were working on our forecast. It’ll come out later this week. We were ready to raise the forecast when we launched the pre-flight testing program. The number of visitors that were coming in in October and in November exceeded our expectations. We didn’t raise our forecast, actually. We actually lowered it for December, January and February versus November.” 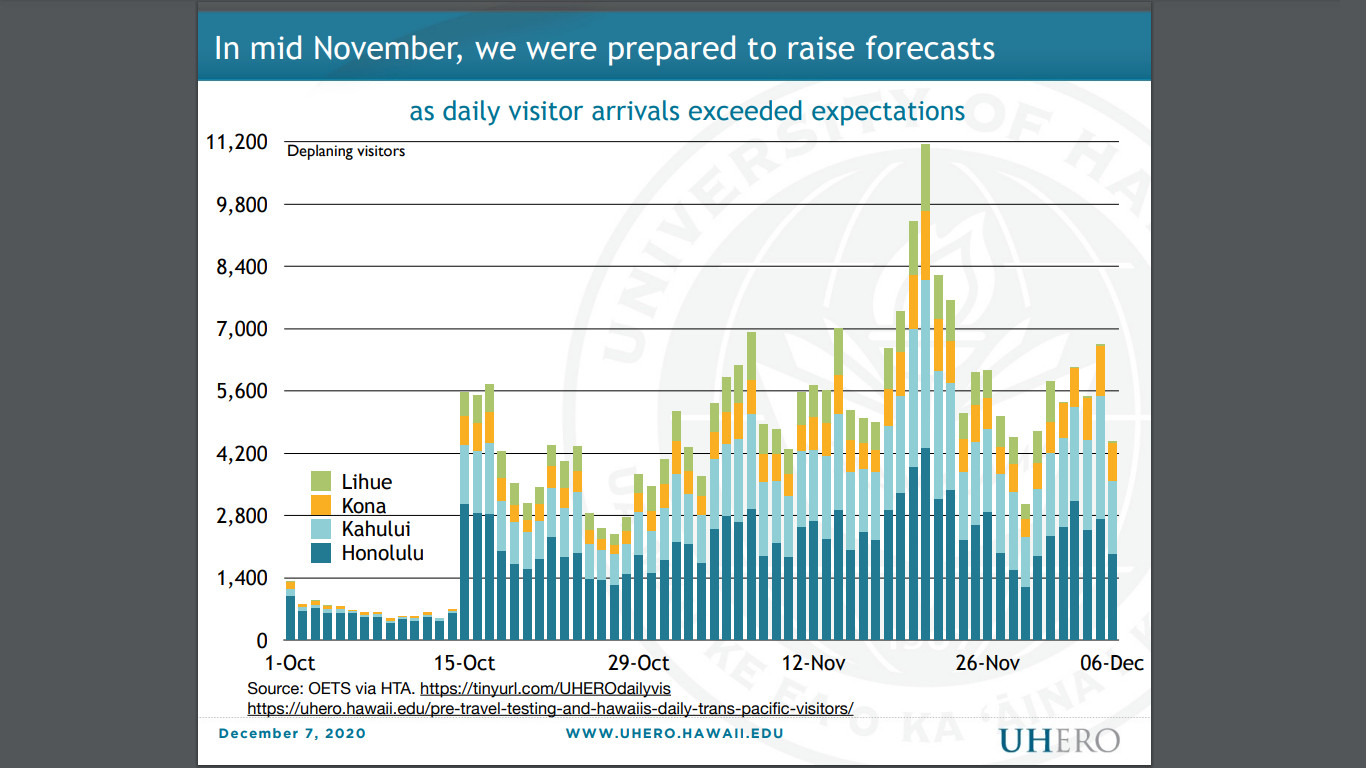 “That and the other policy changes have created uncertainty that sort of raise the issue of whether or not December will be nearly as good as November. So far, we’re averaging a couple hundred visitors fewer per day for the first six days of December than we did for all of November, so we’ve actually lowered our our baseline scenario for recovery, if you will.” 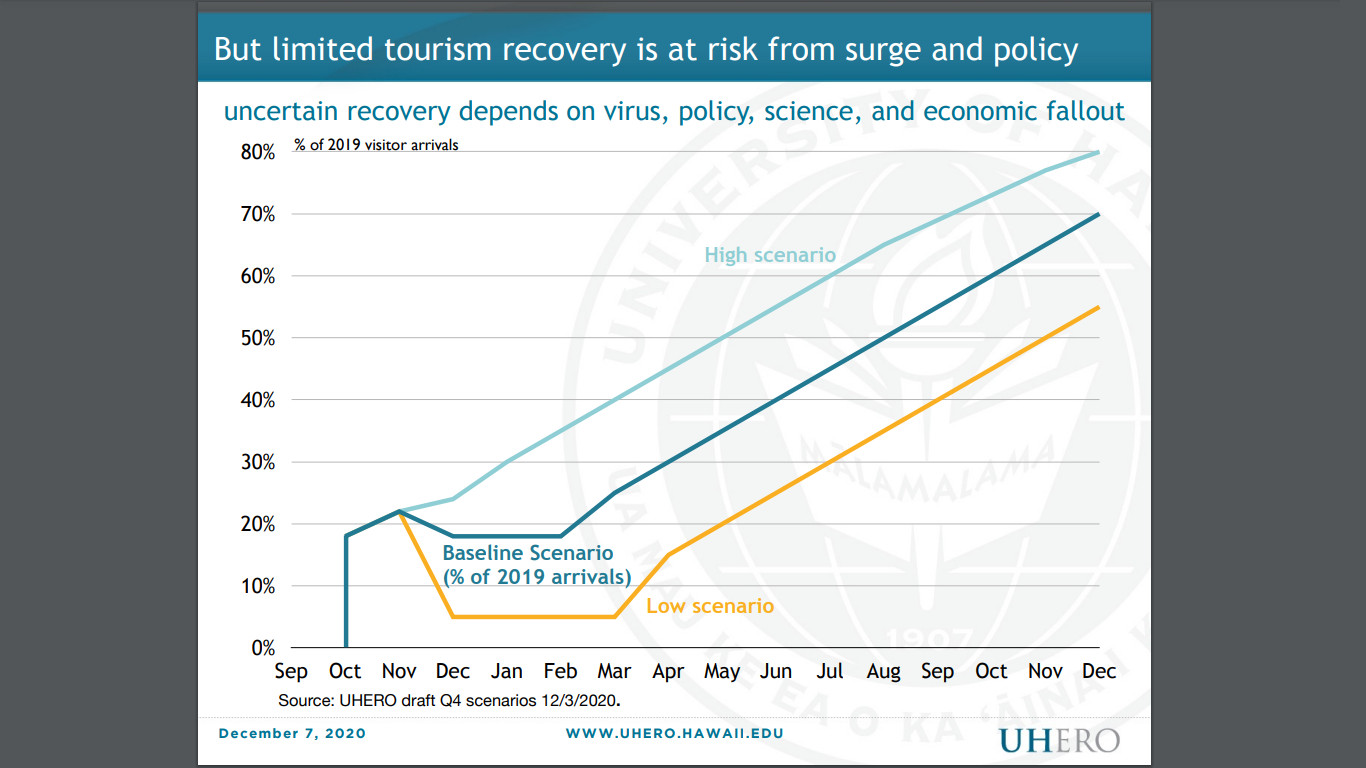 Bonham: “In the month of November, the number of daily deplaning visitors, by our account, was 22% of last year’s levels. So we’re assuming that December, January and February will be below that percentage, and the reason is the surging cases on the mainland, the lockdowns, the shelter-in-place orders, the travel restrictions that are happening on the mainland. And also, the uncertainty about policy in Hawaiʻi. Not knowing if there’s going to be a change from the time you book your flight and your hotel room, to when you go to get on the plane.”

“Our nascent recovery, our economic recovery, is at risk, basically.”

“This chart, I thought, was interesting to compare the recovery for the U.S. mainland.” 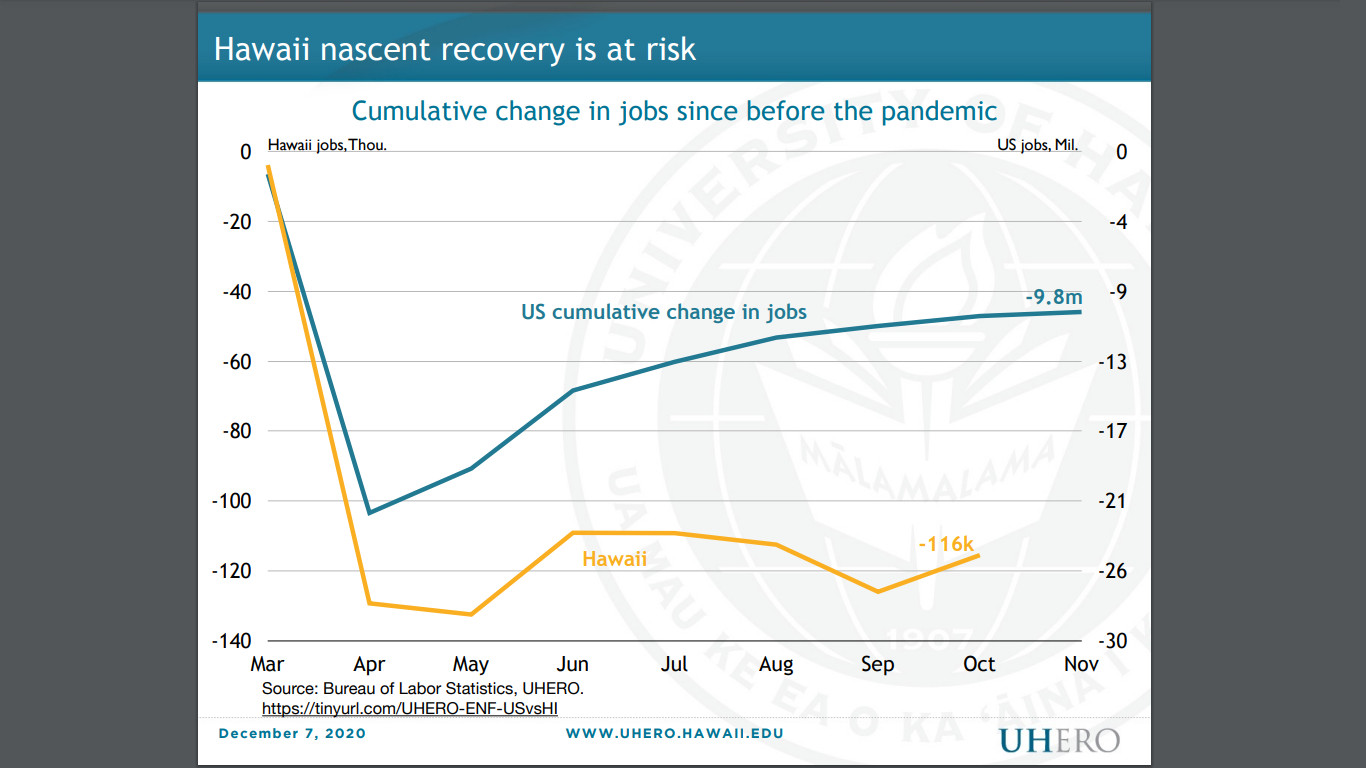 Bonham: “After losing 21 million jobs, the U.S. has gradually recovered. That recovery has slowed down dramatically and that’s a concern going forward. Hawaiʻi has barely… we saw a reasonable recovery before the surge on Oʻahu, then a retrenchment, and a renewed recovery in October. We think November will continue its upward path, but there’s beginning to be some small signs of slowing, as we get into December. So we’re sort of concerned about the very near term – the December, January, February – about it being a tough winter, right?

“At the same time that we see the potential for loss of federal support.”

Later in the day, Bonham spoke specifically about what he sees in the data from Hawaii island. 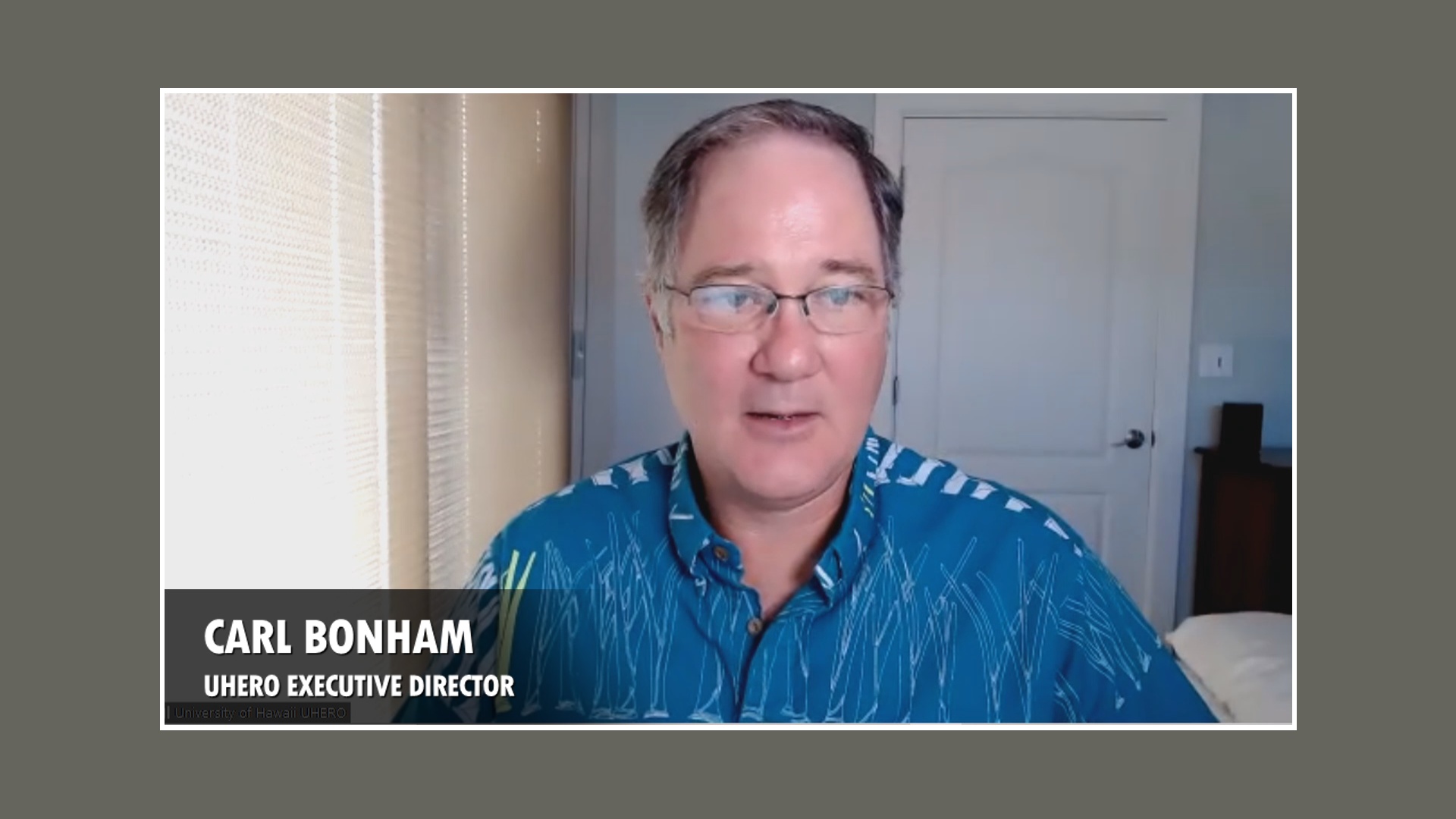 Bonham: “Hawaiʻi island has fared better than Maui and Kauai because the economy is less dependent on tourism. Having said, that there’s still… more than 40,000 people getting regular unemployment benefits.

“The reason I have to estimate these is because we don’t have it … at the county level, it’s only at the state level. So, sort of back-of-the-envelope
calculations are that there are close to 10,000 people on PUA unemployment benefits right now, and so those are the ones that without action by Congress in the next three weeks, will go away.

“On Oʻahu, I think it’s maybe 16%, 17% at most. That’s an important feature, and there’s obviously much more ag and other other activities. That’s really the primary explanation for why the Big Island has fared better. But it also means when tourism comes back, it won’t have as big of an impact in terms of recovery.”

House Speaker Scott Saiki was also a part of the conversation. Members of his committee on COVID-19 recently wrote a white paper, explaining how Governor David Ige’s recent change to the Safe Travels Hawaii program, “has had unintended and unfortunate consequences,” such as thousands of cancellations per hotel property, “resulting in millions of dollars in lost revenue and the staffing downsizing.” 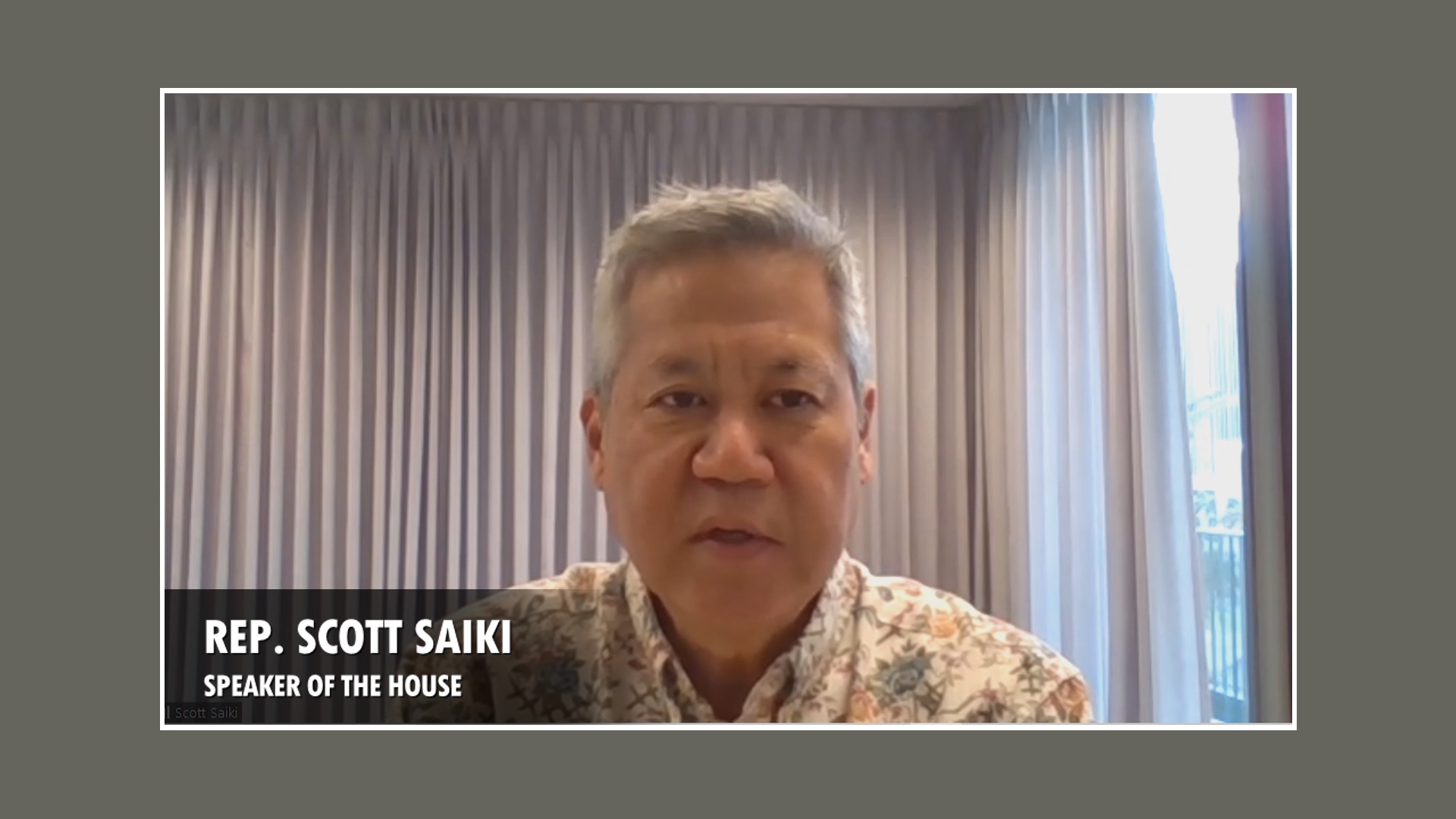 Speaker Saiki: “Our House COVID committee has always taken the position that the first priority in our state is public health and safety. We want residents to be healthy and safe, and given that we know that a healthy population will lead to basically a healthy economy, a revitalized economy. That’s why we see the two go hand-in-hand. We just want to make sure that people understand that point. That we are concerned first and foremost about public health and safety.

“At this point, it’s really for the governor to set some direction and clarity on what our travel policies will be on a statewide basis. I’ve said it before, I’ll say it again, that when it comes to tourism, tourism is part of our statewide economy and when if one component of that formula is missing, then it will disrupt the entire statewide system. That’s why it’s important for the governor to have a statewide perspective and a statewide policy on how we want to handle tourism.”