A synthesized voice was utilized in the narration for this story. Video and photos are from the USGS Hawaiian Volcano Observatory, NPS.

HAWAIʻI VOLCANOES NATIONAL PARK - The lava lake level has been rising slowly again since December 27th, and recently reached a new peak elevation at 2,300 feet above sea level, with a depth of 603 feet. 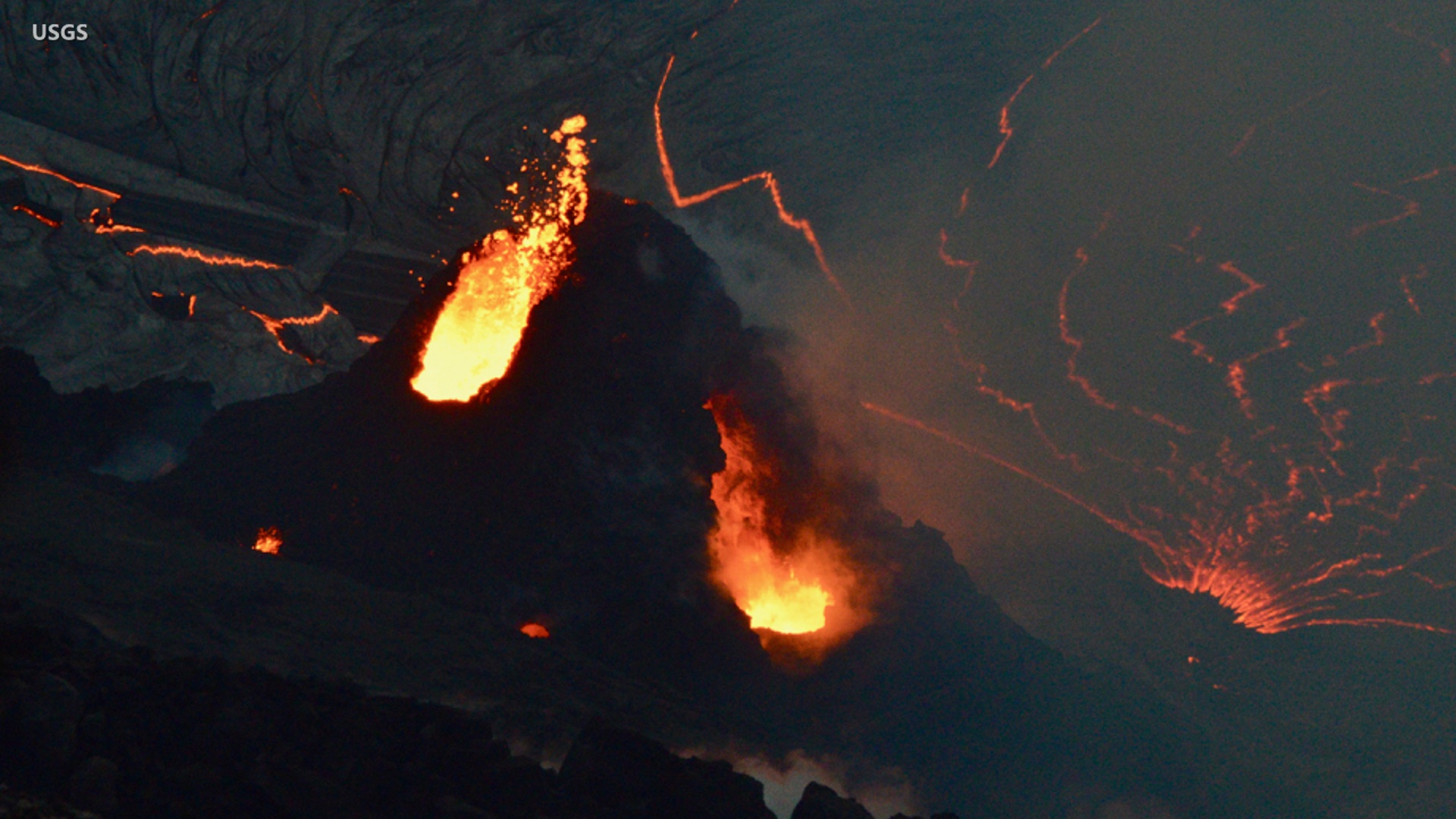 The western fissure in Halemaʻumaʻu wall remains active. Glowing vents and a prominent spatter cone are visible in this photo, which shows some spattering at the vent. This view looks steeply down from Kīlauea’s west caldera rim, and the lava lake surface is visible in the background. USGS photo by B. Carr on 12/31/2020.

On the last day of the year 2020, the new eruption of Kīlauea volcano continues to feed a rising lava lake in the summit caldera.

Photos taken by the Hawaiian Volcano Observatory on Thursday morning show lava continues to flow from the west vent area, which is visible in the lower center portion of the lake, in this photo.

Sulfur dioxide emissions on Wednesday were measured at about 3,800 tones/day. All activity is confined to the summit caldera. HVO says there are no signs of activity migrating from the summit into the rift zones, nor are there any indications of a summit collapse like occurred two years ago.

The lava lake level has been rising slowly again since December 27th, and recently reached a new peak elevation at 2,300 feet above sea level, with a depth of 603 feet.

In this week’s Volcano Watch article, HVO scientists wrote that the erupted volume to this point has been more than 20 million cubic meters, 700 million cubic feet. Thats equal to bout 8,000 Olympic-sized swimming pools.

Scientists say the eruption rate has decreased to 353 cubic-feet per-second. As of December 30th, the lake was covering an area of 82 acres.

HVO said that over the past day, the island of cooler, solidified lava rafting on the molten lake continues to drift slowly to the west, while the other 10-or-so small islands floated on the east end.

Based on based on a December 30 thermal map, the main island measured about 820 feet in length, 440 feet in width, and about 7 acres in area. The island surface was about 20 to 26 feet above the lake surface.

The lava lake is still too low to be visible from any of the public viewing areas in Hawaiʻi Volcanoes National Park. 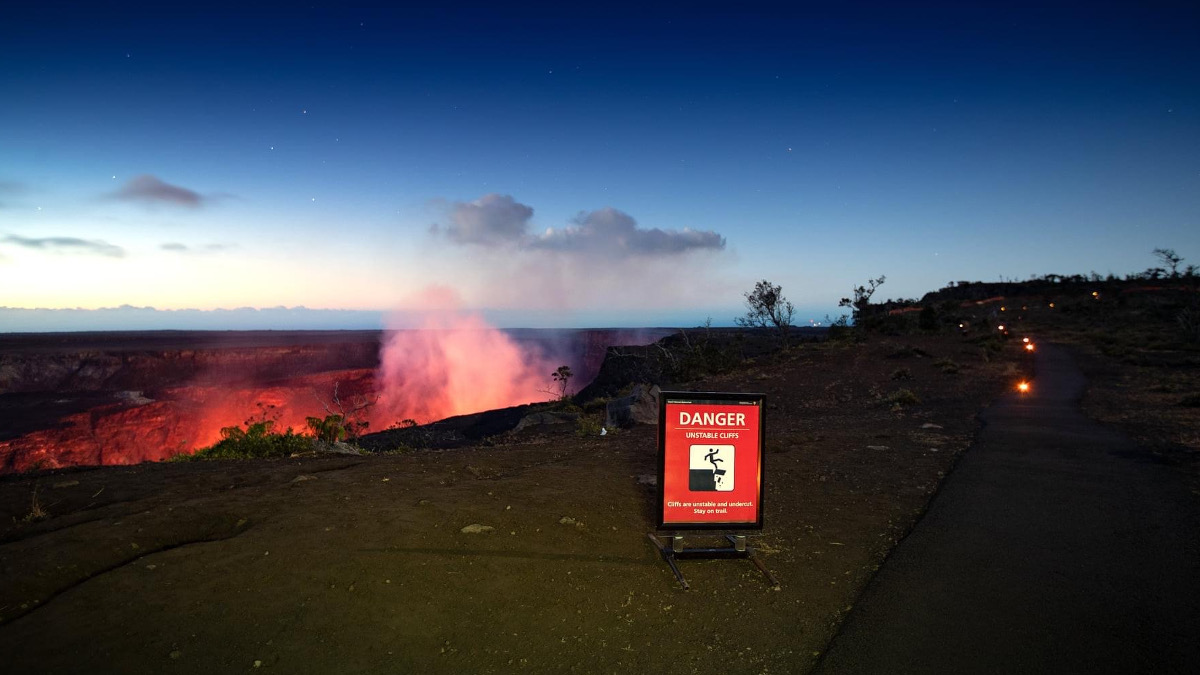 In the Volcano Watch article, scientists address two of the most common questions that HVO gets: When will the lake be visible from an open area of Hawaii Volcanoes National Park? And, will the lava lake fill the entire crater?

The scientists say these questions are difficult to answer, because the activity is so dynamic. When the event first started, the lava lake rose rapidly due to the high rates of the eruption, and the conical-shape of the base of the crater.

Since then, the eruption rate has varied. Preliminary calculations indicate the lava lake should be visible from Kilauea Overlook once it reaches an elevation just over 2,560 feet above-sea-level. They note another 16 feet of rise, and the lava will overflow the lowermost rim of the crater on the northeast side.

Since the lava lake level is currently at about 2,300 feet above sea level, it has about 262 feet to rise before it becomes visible to the public. When it does, depends on the rate of lava being erupted.

Assuming a constant eruption at today’s rate of 353 cubic feet per second, scientists calculate it will take approximately 45 days for lava to fill the crater and rise-up to be visible from Kilauea Overlook.

However, scientists figure it would likely take longer, because the eruption rate has been fluctuating since the eruption began on December 20th, and has generally been decreasing.

Rangers at Hawaiʻi Volcanoes National Park say visitors should stay on marked trails, avoiding crater edges that are unstable and could collapse.

Visitors should also avoid peak times. While Kīlauea Overlook offers a breathtaking panoramic view, the parking lot fills up quickly between 5 p.m. and 8 p.m. Overflow parking at Kilauea Military Camp is a mile or more away.

It is recommended that visitors come after 8 p.m. or an hour or two before sunrise. Rangers say you should bring a flashlight and don’t forget warm clothes, rain gear and sturdy footwear.