A synthesized voice was utilized in the narration for this story. Video recorded by the Hawaiʻi DLNR, with additional video courtesy Kanaka Garden advocate Donna Grabow.

HILO, Hawaiʻi - State Park officials estimate several hundred plants were pulled from the ground, and were trucked to the University of Hawai‘i at Hilo School of Tropical Agriculture. 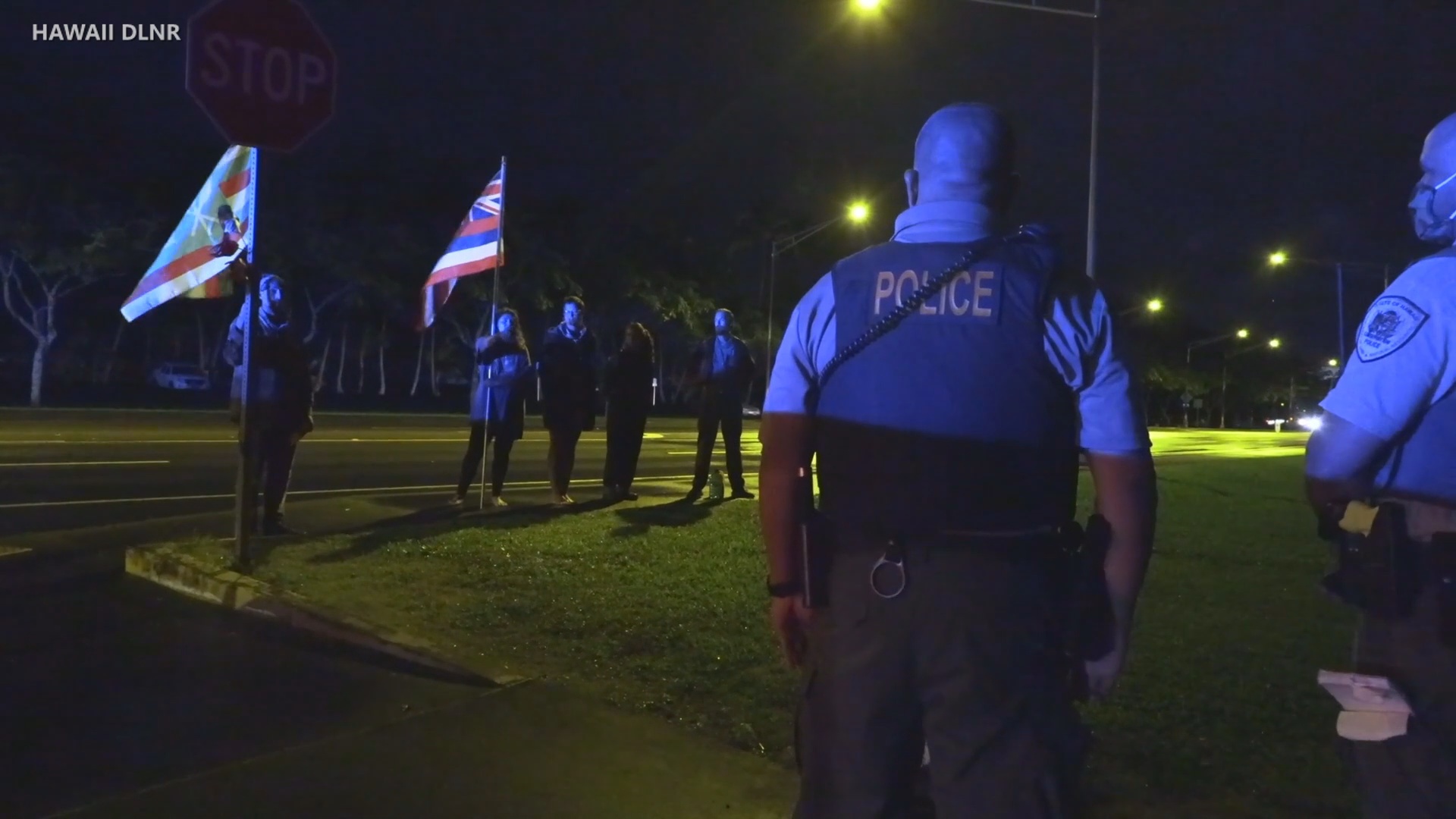 The following is a transcript for the video article above. This is partial transcript that will be updated to a full transcript before this afternoon.

In the dark, early morning hours of January 7, Hawaiʻi state law enforcement descended upon the Wailoa River State Recreation Area in Hilo, in order to put an end to the Kanaka Garden.

GENE TAMASHIRO: “Do I have somebody, anybody, got a camera so we can record this action here?”

The Kanaka Garden was first planted back in 20 13, and was swiftly abolished by the state. It was gone for years, but then re-emerged over the course of the last several days. The garden is comprised of various canoe plants, situated over an area that is roughly the size of a football field. The resurrected garden got the attention of the Hawaii Department of Land and Natural Resources. The State maintains that the garden is illegal, and served notice to caretakers on Tuesday.

In turn, Kanaka Garden supporter Gene Tamashiro challenged the state on its legal jurisdiction to enforce such laws. They even produced their own cease and desist order, from what thewy say is the Hawaiian Kingdom Government Authority, restraining the DLNR from taking action.

TAMASHIRO: “… our autograph, our signatures. All in the public record. So, if these guys obey her and they don’t make sure she brings forward facts and evidence to prove this ʻaina is not crown land, if she can bring evidence that this ʻaina belongs to the State of Hawaiʻi, we will all go home!”

Nevertheless, officers from the DLNR Division of Conservation and Resources Enforcement took action on Thursday. This video was recorded by the DLNR, and made available to the public. It shows Tamashiro meeting with the officers as the enforcement action got underway.

TAMASHIRO: “Okay. So once again, the attorney general and Suzanne Case have not presented any correspondence or any evidence that you guys have superior title or jurisdiction. So that controversy is still happening. And you guys taking the action.”

DOCARE OFFICER LARRY: “We served you with a cease and desist.”

TAMASHIRO: “You served me with a claim. And that claim has not been supported by any factual evidence of superior title. I’m making my claim.”

TAMASHIRO: “No problem. So, my remedy is a nation to nation settlement, and we can also correct this in U.S. constitution. Article 6 clause 2, supremacy of treaties. And don’t cancel this, when last time you went edit and you canceled it out. When you send that out to the world, include everything. Because it’s full disclosure and that’s your guys’ job. Thank you, Larry.”

As DOCARE officers stood watch, a crew from the DLNR Division of State Parks removed kalo, ape, and banana trees from the ground.

State Park officials estimate several hundred plants were pulled from the ground, and were trucked to the University of Hawai‘i at Hilo School of Tropical Agriculture. State officials say viable plants will be returned to the ground.

DOCARE officers also removed the Kanaka Garden sign, as well as several flags that had been erected at the park’s main entrance. The state says officers from the Hawai‘i Police Department and the Department of Public Safety Sheriff Division provided support for the operation.

DLNR reports Tamashiro was cited by DOCARE officers on three Hawai‘i Administrative Rules violations. Tamashiro will be required to appear in Hilo District Court on February 19 to answer charges of leaving abandoned property on public lands, unauthorized use of State lands for agriculture use, and introducing plants onto public property, the State says.