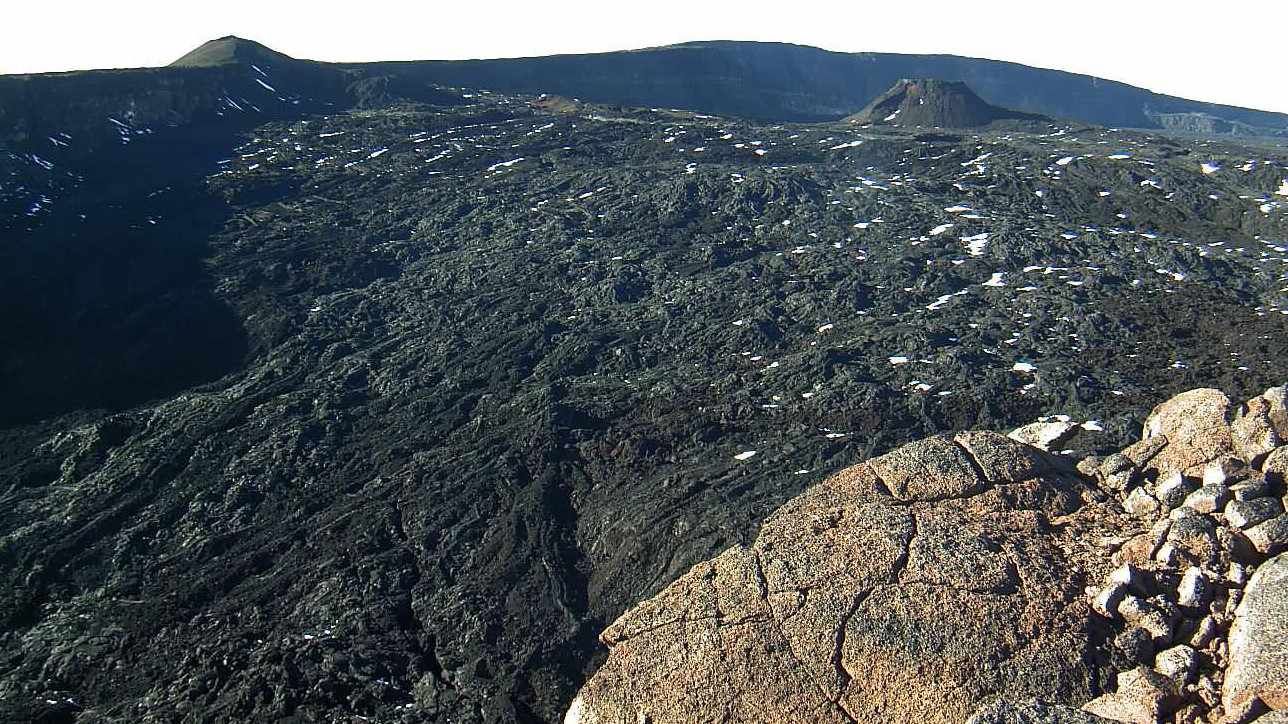 HAWAIʻI ISLAND - Although Mauna Loa is not erupting, scientists say "now is the time to revisit personal eruption plans." 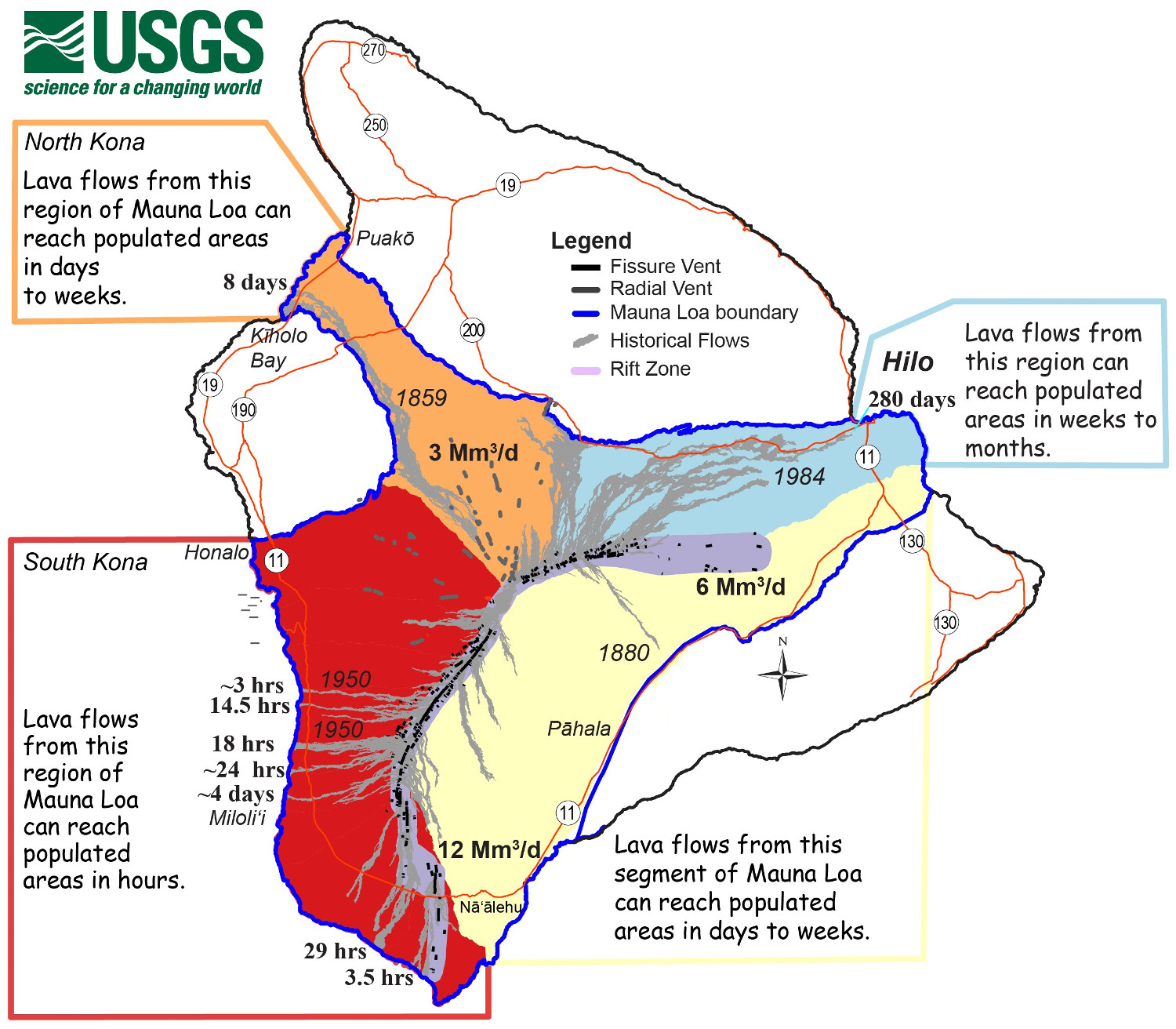 (USGS) This map shows the response time people can expect based on Mauna Loa eruptions over the past 200 years. Different sectors around Mauna Loa are colored according to how quickly lava flows can reach populated areas. The warmer the color, the more quickly the flows travel. Mauna Loa lava flows over the past 200 years are shown in gray, and the numbers along the coastline indicate lava travel times to the ocean after the vent(s) opened. Large, bold numbers record the average effusion rates for the different parts of the volcano in millions of cubic meters per day (Mm3/d).

(BIVN) – This week’s Volcano Watch article, written by U.S. Geological Survey Hawaiian Volcano Observatory scientists and affiliates, was delivered with a famous quote from Benjamin Franklin. – “By failing to prepare, you are preparing to fail.”

Mauna Loa is not erupting, and remains at Volcano Alert Level ADVISORY. Scientists say this alert level does not mean that an eruption is imminent or that progression to an eruption from the current level of unrest is certain.

During the past week, HVO seismometers recorded over 200 small-magnitude earthquakes below Mauna Loa, typical of the past several weeks. A slight increase in the rate of inflation at the summit that began in January is continuing. Gas concentrations (0 ppm SO2) and fumarole temperatures (below 100 °C) at both the summit and at Sulphur Cone on the Southwest Rift Zone remain stable, scientists say.

From this week’s Volcano Watch:

What can you do if you live on or near Mauna Loa? A few simple steps can help you prepare: First, learn about the volcanic hazards that could affect your community. Next, develop a plan with your ʻohana – what you will do during a natural hazards emergency. Finally, help your community prepare. A few minutes spent preparing now could keep you, your ʻohana, and your community safe.

How can you learn what to expect during a Mauna Loa eruption? The USGS Hawaiian Volcano Observatory (HVO) website has information on lava flows and other volcanic hazards, including a fact sheet specifically about Mauna Loa hazards.

The map shown here – modified from the factsheet – indicates the response time people can expect based on the travel times of Mauna Loa eruptions over the past 200 years. Different sectors around Mauna Loa are colored according to how quickly lava flows can reach populated areas.

The Hilo area is in green: lava traversing the northeast portion of the volcano travels at a modest clip. Mauna Loa flows in the past reached Hilo in weeks to months due to the greater distances to populated areas and gentle slopes in the uplands that slow down flow advance.

The southeast flank of the Mauna Loa is in yellow: flows travel at a moderate clip and can reach populated areas in days to weeks. This flank has steep to moderate slopes. In 1880, an ‘a‘ā flow traversed 20 km (16 miles) in 7 days as it advanced toward Kīlauea.

Mauna Loa’s northwest flank is in orange: flows can reach populated areas in days to weeks. This flank has moderate to steep slopes and flows travel at a moderate clip. Radial vents in this region in the past issued lava from below sea level to the summit of the volcano. This region is orange because if a radial vent eruption starts low on the flanks, precious little time may be available for response efforts.

The west side of Mauna Loa’s Southwest Rift Zone (SWRZ) is in magenta: flows can reach populated areas in hours because of the steep slopes and vigorous lava production. Many flows from the SWRZ have entered the ocean in less than a day (see map for travel times).

How can you prepare for a Mauna Loa eruption? The most important thing you can do is to have a personal response plan—especially if you live in or near the magenta zone. Nowadays, people pack “go” bags containing essential items in case you have to leave your house under an evacuation order. You may want to include important documents, like your birth certificate, deeds, legal papers, and medications. See an example “go” bag checklist here.

Where will the ʻohana go when an eruption starts? Let’s say you live in South Kona. During the day, your tutu and pets stay home but you go to work in North Kona and the kids go to school in Nāʻālehu (Ka‘ū). Imagine an eruption starts on Mauna Loa while you are at work. If your family prepares and implements an eruption plan, the details are taken care of and the ʻohana can meet in a predetermined place. It is useful to also have a communication plan, so you can be in touch with those you care about.

What other resources are available to help a community with eruption planning? The Hawaii County Civil Defense (HCCD) website has a whole section devoted to preparedness. Lava inundation zone maps for Mauna Loa are available online and at local libraries. They illustrate what portion of the volcano can send flows in specific directions. See this video for an extended discussion on the colored flow regions, and lava inundation maps:

As long as people continue to live on the flanks of Hawai‘i’s active volcanoes, the risks from lava flow hazards are real and potentially tragic. We all can do our part to reduce the impact to people and property through education, land-use planning, and response plans.