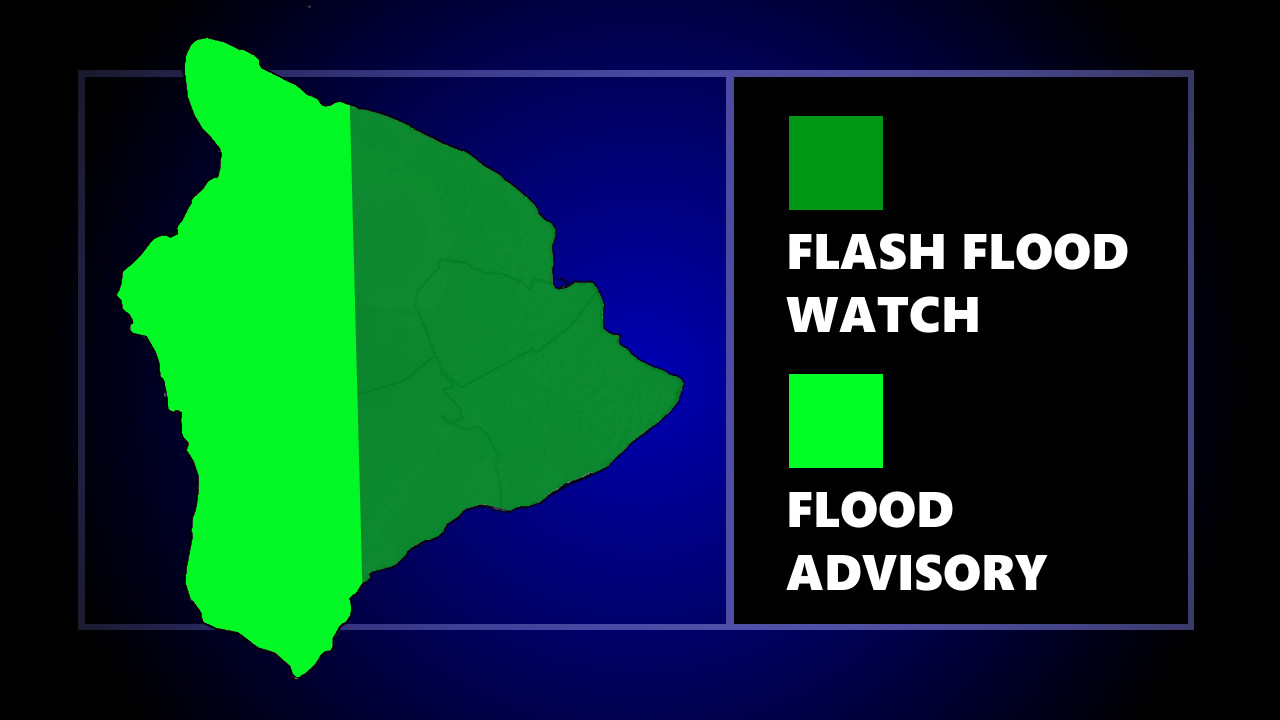 HAWAIʻI ISLAND - Hawaiʻi island is under a continued Flash Flood Watch, and the Kona-side of the island was placed under a Flood Advisory on Saturday morning.

(BIVN) – Hawaiʻi island remains under a Flash Flood Watch as the weekend begins.

The National Weather Service says a front is moving into the eastern half of the state. This front, along with a moist and unstable atmosphere, brings the potential for intense rainfall and flash flooding.

On Saturday morning, a Flood Advisory was issued for the island of Hawaiʻi until 10:45 a.m. HST. From the NWS alert:

At 7:34 a.m. HST, radar indicated heavy showers coming ashore along the leeward coast, from Upolu Point to Kailua-Kona, with additional heavy showers impacting the area around South Point. Rain was falling at a rate of up to 2 inches per hour.

The National Weather Service in Honolulu also issued a Special Marine Warning for Alenuihaha Channel and the waters around the north side of the island. At 7:25 a.m. HST, “a strong line of thunderstorm capable of producing waterspouts stretched across Big Island windward, and leeward waters. The strong thunderstorms were moving west at 10 knots.”

A Winter Weather Advisory is also in place for the summits. Total snow accumulations of up to four inches are possible, with winds gusting as high as 65 mph.

Emergency Officials Urge Residents to Use Caution and Document Damages

From the Hawai’i Emergency Management Agency:

The severe weather which has caused widespread flooding across the state has been very destructive and has impacted many residents, damaging their belongings, and property. The Hawai’i Emergency Management Agency (HI-EMA) would like to remind those affected to return home only after authorities say it is safe, and avoid wading in floodwater, which may be hiding debris, contaminated with sewage, or electrically charged.

For insurance purposes, take video or photographs of flood damage before cleaning up. Begin cleanup immediately after documenting, do not wait for a flood insurance adjuster or inspector to come to your home.

These suggestions were given by HI-EMA: