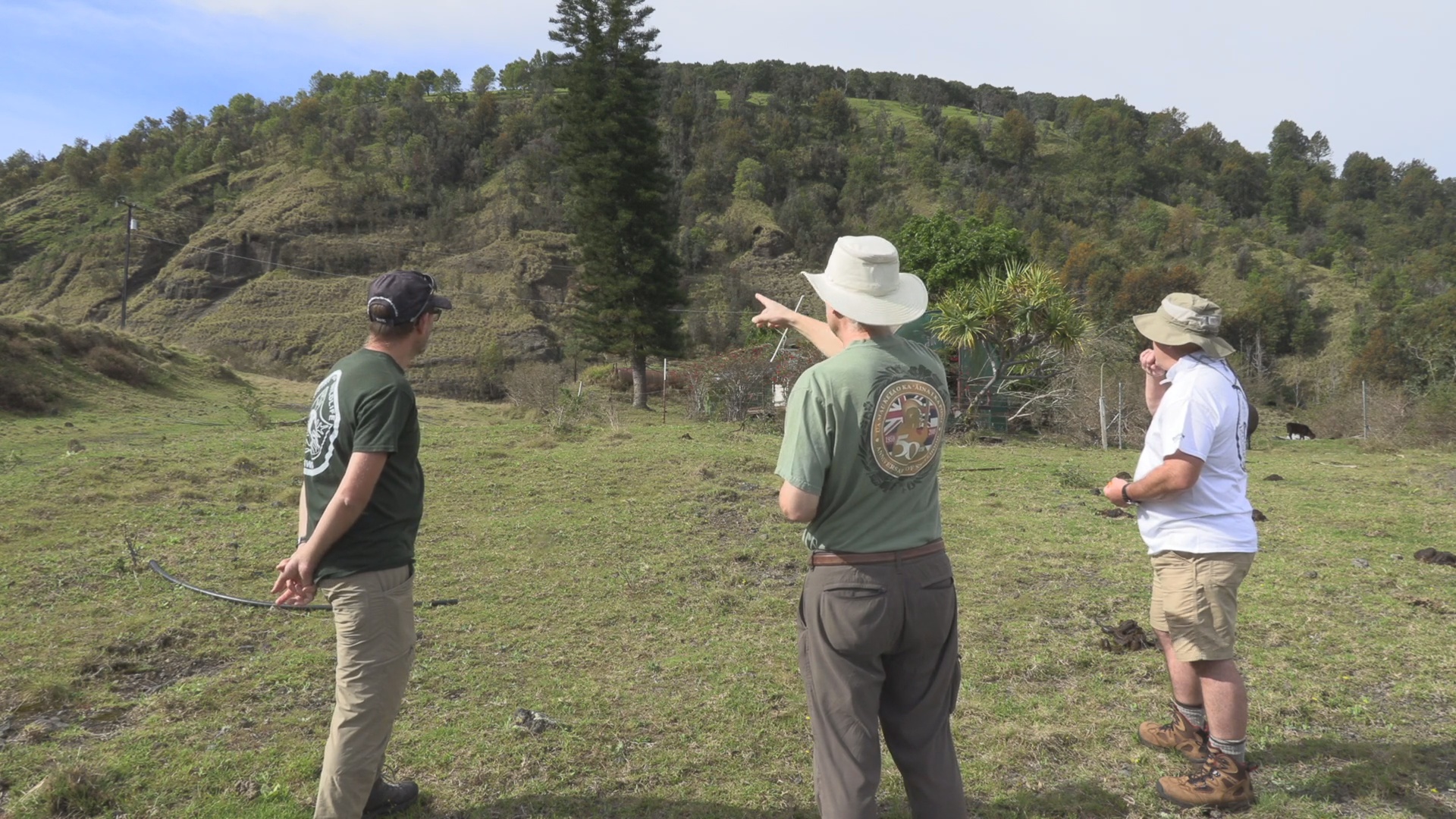 A cinder block building, an old Quonset hut, and a diesel fuel tank will need to be taken care of as part of a hazard removal program. Image from video courtesy Hawaiʻi DLNR.

(BIVN) – The Hawaiʻi Department of Land and Natural Resources issued a news release on Monday, describing plans to restore and remediate the area within Puʻu Waʻawaʻa Forest Reserve.

The first scenes for hikers intending to ascend the Pu‘u Wa‘awa‘a cinder cone, do not exactly depict a pristine forest reserve.

Remnants of former industrial uses of the property, scattered across the landscape near the beginning of the 3.2-mile-long trail, were the focus of a 2009 Environmental Site Assessment, conducted by the USDA Forest Service Enterprise Program. Thanks to the efforts of

Representative Tarnas toured the site and made the hike last week. “Pu‘u Wa‘awa‘a is an asset of statewide significance, so we really needed to make sure we addressed the concerns here to allow for safe access for recreational purposes,” Tarnas said.

Dr. Elliott Parsons, of the DLNR Division of Forestry and Wildlife (DOFAW), detailed for Tarnas the scope of the $200,000 hazard removal program, which they hope to have finished by the end of next year.

“There’s a cinder block building, an old Quonset hut, a diesel fuel tank, and the potential of lead paint and asbestos issues, along with trash and debris, that will have to be taken care of,” Dr. Parsons explained. “We want to make sure this area is safe and nice and to have people able to utilize the hiking trail and enjoy their time at Pu‘u Wa‘awa‘a.”

You can’t miss Pu‘u Wa‘awa‘a, driving between Kailua-Kona and Waimea. It is the prominent, and typically very green, cinder cone that rises 3,967 feet above sea level between Mauna Kea and Hualālai volcanoes.

Dr. Parsons calls it a remarkable land feature. The cinder cone is an estimated 100,000-years-old, much older than the surrounding lava flows of between 3,000 and 5,000 years-old. “It’s an amazing view from the top, with views of the 1959 lava flows from Mauna Kea, Mauna Loa, and Hualālai. Reforestation efforts over the past 20-years have included the plantings of 40-60 native species. The landscape is enormous,” Dr. Parsons added.

Hikers can look to the south-west to a State Wildlife Sanctuary which supports numerous Hawaiian honeycreepers like, ‘apapane, ‘i‘iwi, and ‘amakihi. The diverse, restored forest near the summit of the cone includes koa, māmane and kolea.

Dr. Parsons said, “It’s a great place to recreate, and hiking on the trail is really good exercise. I try to come up here once a week, as it’s a really special place with a lot of cultural significance as well.”

Rep. Tarnas hopes that the cinder block building might be able to be repurposed, depending on findings about lead paint and asbestos. “Pu‘u Wa‘awa‘a has historical and cultural significance, in addition to its natural resource values. There are numerous pre-contact stories about this place and post-contact stories that have been captured as oral histories about the region’s ranching heritage.”

An active cattle ranch is still in operation at the base of the cinder cone. Visitors will undoubtedly see a lot of cows, sheep, and goats, which are not native, and eventually will be kept out of sensitive natural areas by additional fencing.