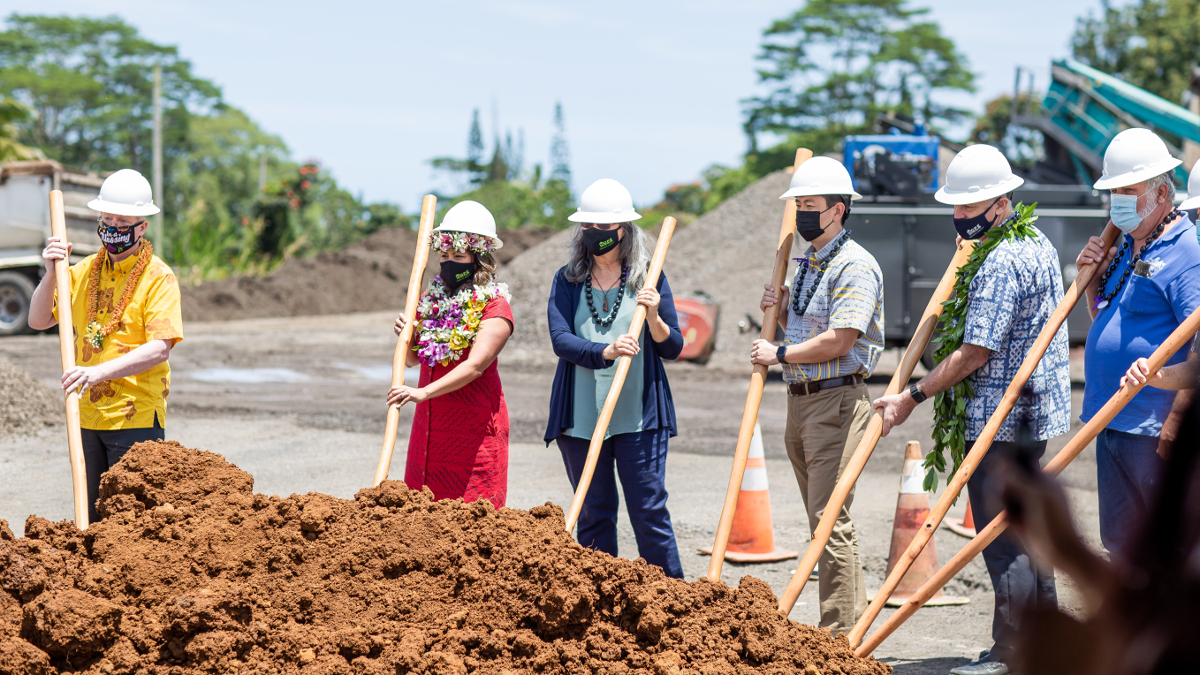 PĀHOA, Hawaiʻi - The project, currently awaiting approval from the county Department of Public Works, is expected to be completed this fall. 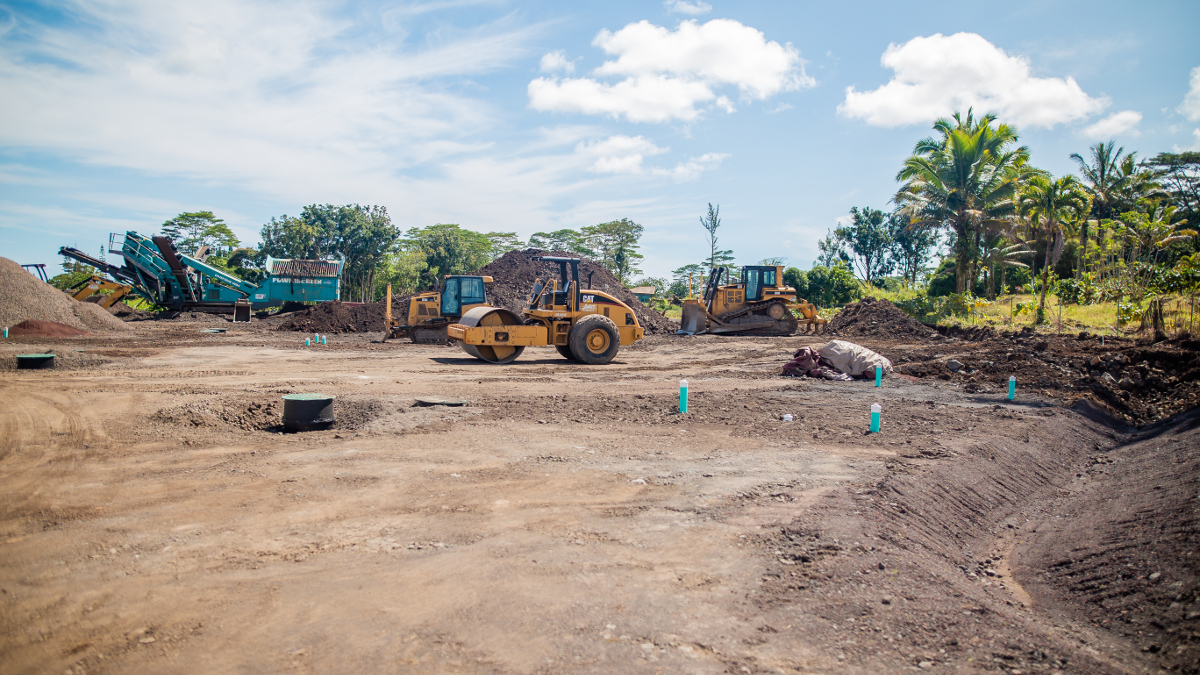 The Pāhoa development will consist of 12 modular efficiency studio units, HOPE Services says. Each unit will have its own kitchen and bathroom, as well as a central pavilion and office. The project sits on land adjacent to Sacred Heart Shelter, the micro-shelter village constructed to house those displaced by the 2018 lower Puna lava eruptions.

HOPE Services described the groundbreaking in this news release:

The ceremony opened with a prayer from Reverend Eric Anderson, President of Interfaith Communities in Action which helped fund and support the project.

HOPE Services CEO Brandee Menino expressed gratitude to funders who provided the $2.2 million needed to cover the new development’s construction costs. She also shared appreciation for building and engineering partners, whose expertise helped the agency devise plans to overcome a variety of challenges since the idea was conceived more than a decade ago.

At the ceremony, Menino praised the vision of former County Councilwoman Emily Naeole, and Menino’s own predecessor, Carol Ignacio. “It started with their partnership and their vision of this project for Pahoa,” she said.

Initially slated as a plan to rehab units transported from Kawaihae, the project has faced considerable setbacks, including permitting issues, contractor changes, and challenges to receiving federal funding because of the neighborhood’s lava zone status. The struggles were further compounded by county and state leadership changes and rising costs. “After a few years,” Meninoshe said, “the feedback became ‘this is not going to work.’” But persistence and community will revitalized the project following the 2018 lower Puna lava eruptions. Continued relationship building and leveraging the critical need for housing, the Sacred Heart Affordable Housing Project is on schedule to be home to kūpuna before the year ends. 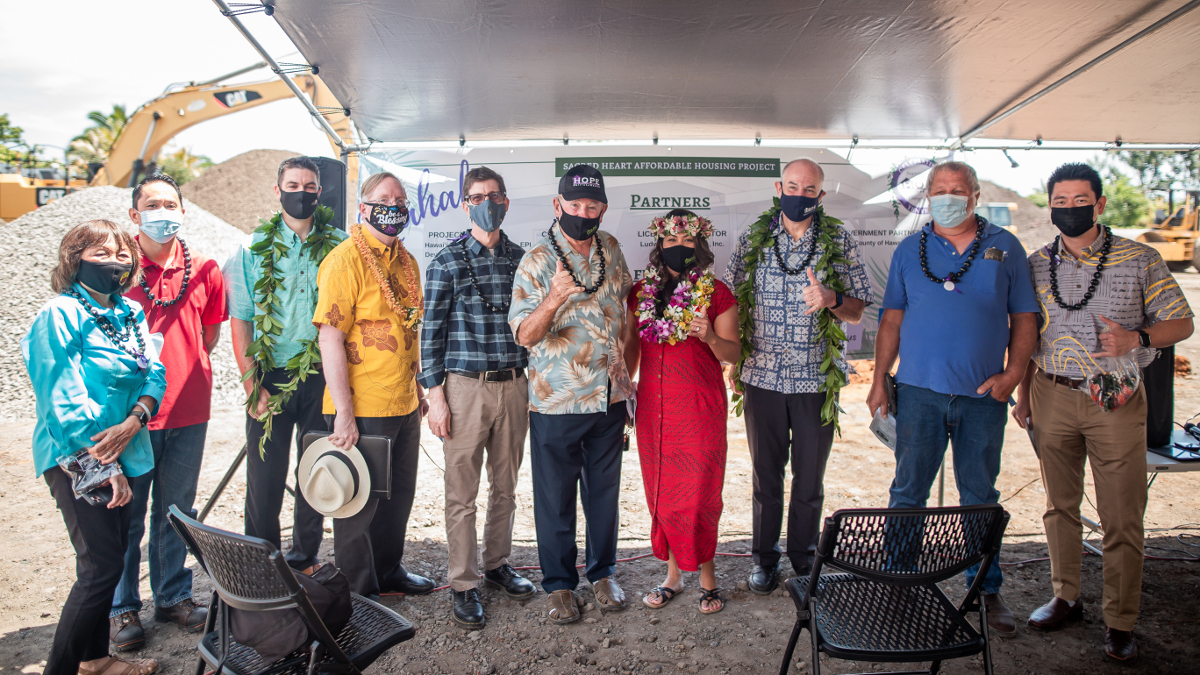 Present at the ceremony were representatives from the County of Hawaii, including Mayor Mitch Roth, and County Council Members Matt Kanealiʻi-Kleinfelder and Ashley Kierkiewicz, who commended the agency’s ability to bring together stakeholders to address community needs.

“Coming from the construction field, [breaking ground] is the most exciting but also the most daunting part of the project…but Brandee pulls it off so well. And the reason we’re here is because of her, her amazing ability to get everyone together and get something done,” Kanealii-Kleinfelder said. “I feel like every time I turn around Brandee Menino is inviting me to a new groundbreaking ceremony.”

“This is another project that exemplifies the power of public-private partnerships and how our community should be working together to meet our most pressing challenges,” said Kierkiewicz.

The ceremony concluded with blessings offered by community members, which were read by HOPE Board of Directors. “May those who inhabit these dwellings be protected by these walls, like loving arms around you. May HOPE Services be forever blessed to continue programs like this,” read a blessing submitted by HOPE Street Medicine volunteer LaVerne Tolmie.

“This is a pivotal point for HOPE Services, said Menino. “This is our tenth anniversary, our tenth year serving our community, and what an amazing event today brings.”

The new units are expected to open this fall, with the timeline contingent on how fast permits can be issued and construction can be completed. The project is currently awaiting approval from the county Department of Public Works.

In the meantime, the agency hopes to raise another $25,000 for furnishing, maintenance, and landscaping. “We’ve been fortunate to have received large donations to cover the construction. Now we’re asking our community to give what they can to bring us to the finish line,.” said Menino. You can contribute to this project by visiting hopeserviceshawaii.org/donate clicking the Paypal link, and typing “Sacred Heart Affordable Housing Project” in the note section.