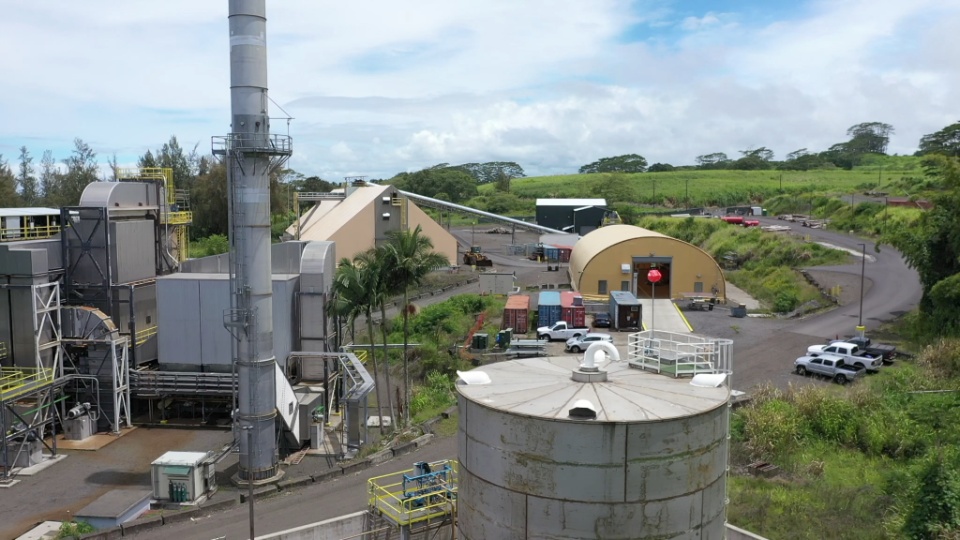 (BIVN) – Its back to the Hawaiʻi Public Utilities Commission for Hu Honua Bioenergy, Hawaiian Electric, Life of the Land, and other parties, after the Hawaiʻi Supreme Court vacated the most recent PUC order concerning the Pepeʻekeo bioenergy project, and remanded the case back to the state’s regulating authority.

In July 2020, the PUC issued an order on docket 2017-0122, denying Hawaiian Electric’s request for approval of an amended and restated Power Purchase Agreement (PPA) with Hu Honua, dealing a devastating blow to the planned bioenergy facility, which is now 99% percent complete and awaiting final regulatory approval.

At the time the docket was opened, Hawaiian Electric’s company on the Big Island was branded the Hawaii Electric Light Company, or HELCO. The Hu Honua Bioenergy company is now known as Honua Ola Bioenergy.

The 2020 PUC decision was one made on remand (a decision known as HELCO 1), after the community and environmental group Life of the Land appealed an earlier PUC decision to the high court. Life of the Land (LOL) argued that the amended PPA failed to consider greenhouse gas emissions as required by Hawaiʻi law.

As the Hawaiʻi Supreme Court explained in its Monday order:

In HELCO I, we agreed with LOL. We vacated the 2017 D&O and remanded the case. We instructed: “On remand, the PUC shall give explicit consideration to the reduction of [greenhouse gas] emissions in determining whether to approve the Amended PPA, and make the findings necessary for this court to determine whether the PUC satisfied its obligations under HRS § 269-6(b).” HELCO I, 145 Hawai‘i at 25, 445 P.3d at 697. The last line of our opinion read: “The PUC’s 2017 D&O is therefore vacated and this case is remanded to the PUC for proceedings consistent with this opinion.”

On remand, the PUC reopened the 2017 docket. Operating under the belief that HELCO I nullified the 2017 waiver by vacating “the 2017 D&O,” the PUC solicited testimony, evidence, and briefing from the parties on several issues including whether it should reissue HELCO a competitive bidding waiver. Eventually, the PUC issued Order No. 37205, denying HELCO’s request for a waiver. Because it denied HELCO a waiver from the competitive bidding framework, the PUC declined to hold an evidentiary hearing or consider the merits of the Amended PPA. Hu Honua moved for reconsideration. The PUC rejected that motion in Order No. 37306.

In Order No. 37306, the PUC explained that its reevaluation of HELCO’s waiver request was unavoidable because HELCO I had vacated the 2017 waiver:

In light of the Court’s ruling vacating the 2017 D&O in its entirety, on remand, the Commission was required to “redo” the proceeding to ensure that LOL was provided meaningful opportunity to be heard on the Project’s impacts on its members’ constitutional rights under HRS Chapter 269.

The compulsory “redo,” the PUC stated, covered the waiver determination since “[t]he issue of the waiver, along with all the other findings and conclusions in the 2017 D&O, were vacated by the Court’s decision [in HELCO I].”

On appeal, Hu Honua contests the PUC’s understanding of HELCO I’s effect on the 2017 waiver. It asserts that HELCO I vacated only the PUC’s 2017 approval of the Amended PPA. Because HELCO I left the 2017 waiver intact, Hu Honua argues, the HELCO I remand did not require the PUC to re-open the waiver issue. For the reasons outlined below, we agree with Hu Honua: HELCO I did not vacate the 2017 waiver and, by extension, did not require the PUC to revisit the threshold waiver issue.

As a result of the latest Hawaiʻi Supreme Court order, “the PUC’s 2017 approval of the Amended PPA remains vacated, the 2017 waiver remains valid and in force, and the PUC, in considering the Amended PPA, remains obligated to follow the instructions we provided in HELCO I.”

The PUC will now have to hold a hearing on the Amended PPA that “complies with procedural due process”, the court says, and:

Warren Lee, the president of Honua Ola, responded to what the bioenergy company saw as a favorable ruling on Monday, stating:

“We are grateful for the Hawaii Supreme Court’s unanimous decision today in favor of Honua Ola Bioenergy. We look forward to the opportunity to present data on how Honua Ola will produce much-needed firm, clean, renewable energy, while also reducing greenhouse gas emissions at the PUC’s evidentiary hearing.

“We are also thankful for the Court’s clarification that the 2017 waiver from competitive bidding remains valid and in force. The PUC approved the 2017 waiver because, among other things, HELCO plans to add intermittent renewable energy and the Hawai‘i Island grid will require sufficient firm (non-weather dependent) dispatchable power to ensure grid reliability. The PUC also stated the project provides the most viable opportunity to add firm, dispatchable, renewable generation as soon as possible.

“Honua Ola will soon be ready to produce firm, clean, renewable energy 24 hours a day, seven days a week for Hawai‘i Island residents and communities. Furthermore, Honua Ola will greatly reduce the Hawai‘i Island’s future dependence on fossil fuels, while facilitating HELCO’s ability to add other intermittent renewable resources, like wind energy and solar power, onto its grid. We look forward to being able to provide these services to the community as soon as possible.”

However, the PUC could still decide to reject the waiver of competitive bidding on the remand. In a concurring opinion, Justice Michael D. Wilson wrote: