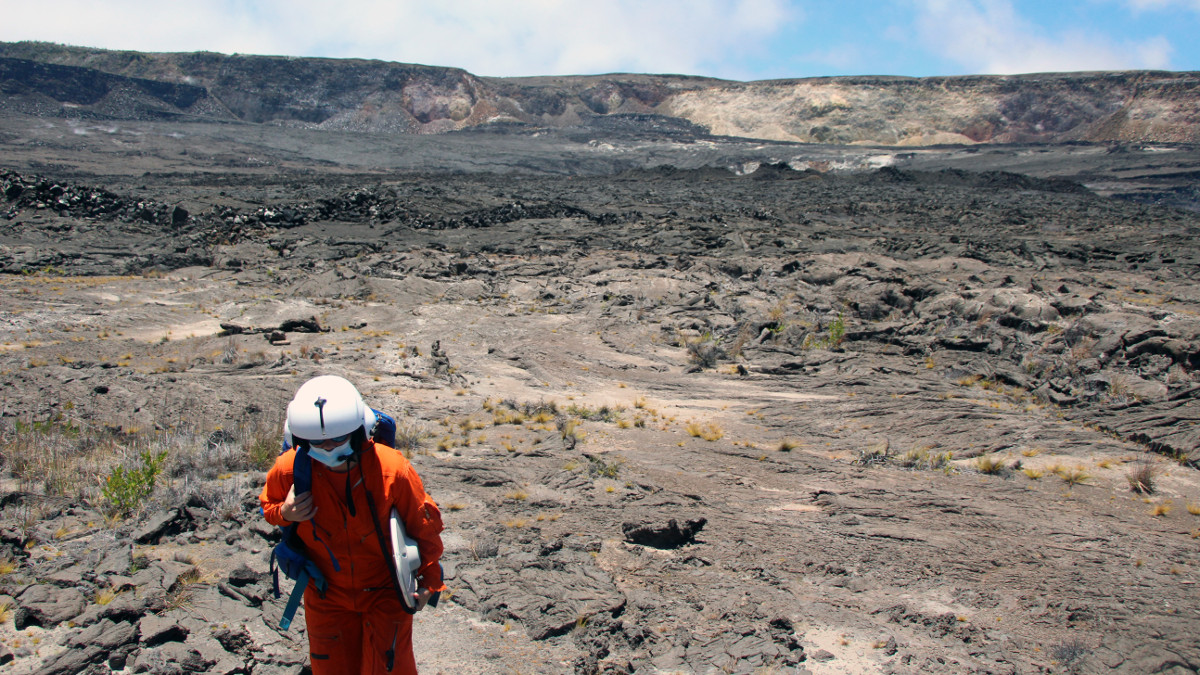 USGS: "On June 8, 2021, the USGS Hawaiian Volcano Observatory conducted a routine helicopter overflight and fieldwork at the summit of Kīlauea. Here, a geophysicist returns to the helicopter after making Global Positioning Systems (GPS) measurements. These surveys measure small changes in the ground surface caused by subsurface magma movement. This scientist carries a GPS antenna along with a field backpack with essential gear, including food, water, and a field first aid kit." USGS photo by C. Parcheta.

HAWAIʻI ISLAND - The USGS Hawaiian Volcano Observatory says "Campaign season is here!" in an article about another way it tracks changes on Hawaiian volcanoes. 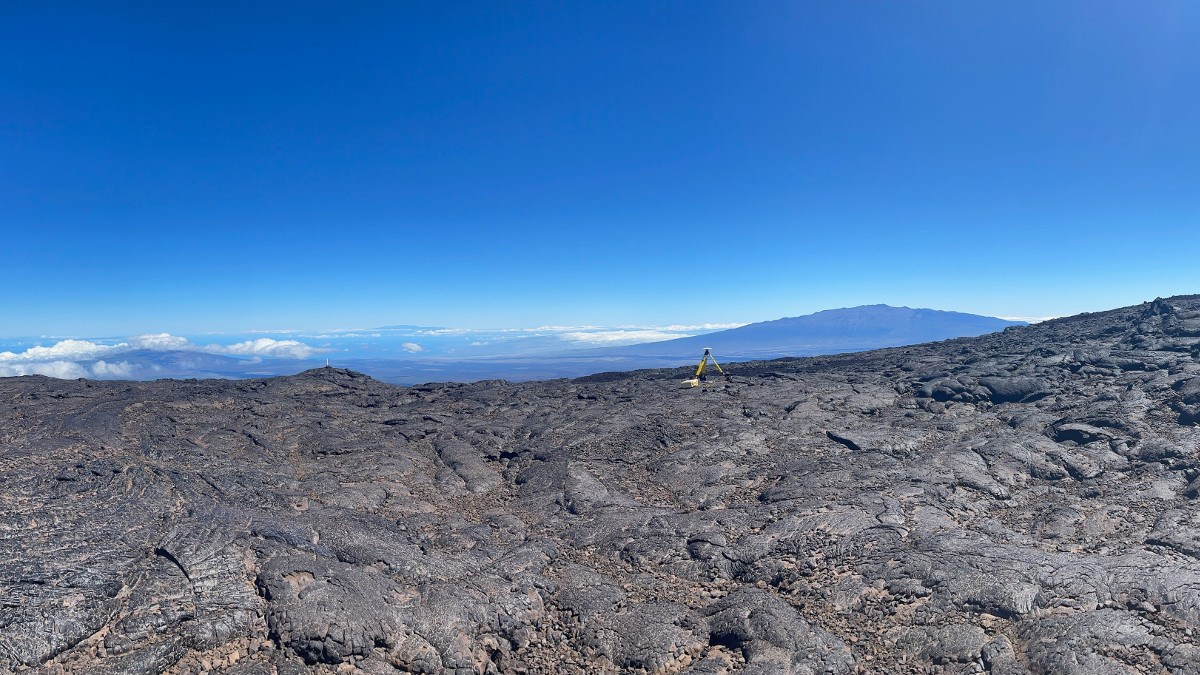 USGS: “On the west side of Mauna Loa summit, a campaign GPS (center-right) measures its location for a period of 2–3 days. This site has been occupied every year by helicopter since 1994. Mauna Kea, Hualālai and Haleakalā can be seen in the distance. USGS photo taken by S. Conway on May 11, 2021, during the 2021 Mauna Loa GPS campaign survey.”

(BIVN) – Kilauea and Mauna Loa volcanoes are not erupting, and both volcanoes are currently at the Volcanic Alert Level of ADVISORY/YELLOW.

“Lava supply to the Halemaʻumaʻu lava lake has ceased and sulfur dioxide emissions have decreased to near pre-eruption background levels,” a recent update from the USGS Hawaiian Volcano Observatory stated. “Summit tiltmeters recorded one deflation-inflation cycle over the past week. Seismicity remains stable overall, with earthquake counts and tremor over the past week similar to the previous week. There are currently no indications suggesting that a resumption of volcanic activity is imminent. Kīlauea remains an active volcano and future eruptions are possible at the summit or elsewhere on the volcano.”

This past week, about 60 small-magnitude earthquakes were recorded below Mauna Loa, with the largest being a Magnitude 3.2 on June 8. Most of these quakes occurred below the summit and upper-elevations at depths of less than 8 kilometers, or about 5 miles.

Scientists continues to closely monitor both volcanoes for any signs of increased activity, and in this week’s Volcano Watch article, Hawaiian Volcano Observatory geophysicist Sarah Conway writes about one of the important methods:

Geodetic surveys measure the change in shape of our volcanoes due to changes in magma supply and storage. The USGS Hawaiian Volcano Observatory (HVO) has a long history of using many different types of instruments and technologies over the decades to detect these changes.

Global Positioning Systems (GPS) receivers are currently the primary instrument of choice to measure changes in distance and elevation due to movement of magma in and out of the volcanoes. These have replaced more traditional surveying instruments that were used in the past.

These measurements initially began as attempts to find the summit elevations and eventually led to the conclusion that Mauna Loa and Kīlauea changed due to the coming and going of magma. HVO now operates 67 GPS stations on the Island of Hawai‘i that take elevation and position measurements constantly.

HVO also conducts campaign surveys to increase the coverage across Hawaiian volcanoes. Campaign GPS surveys are conducted periodically, where high precision instruments are deployed on the volcanoes and operate for days to weeks. These instruments are setup at long-term fixed sites, known as benchmarks, across both Kīlauea and Mauna Loa. The sites are visited yearly, and the difference in position between each yearly visit provides information on how the volcano has changed or behaved over that period of time. Many of these benchmarks have been occupied every year since 1996, providing one of the longest spanning GPS time-series – a sequence of data points that occur over a period of time – of any volcano in the world.

These yearly campaign surveys help supplement the continuously recording GPS receivers that blanket the Island of Hawai‘i. Both the campaign and continuous GPS instruments can measure their positions to within a fraction of an inch, and can thereby detect extremely small movements on the earth’s crust. However, these continuous stations have significant infrastructure requirements, for example, substantial power consumption, radio telemetry needs, and site accessibility. Campaign GPS does not have the same requirements as continuous GPS. Although the instruments are only deployed for a short time, the data they collect helps scientist to refine current models of volcanic activity, like inflation at the summit of Mauna Loa.

Kinematic GPS (kGPS) is another technique used to complement HVO’s continuous GPS network. The kGPS surveys take much less time to complete (a few minutes versus days). However, they rely on a static reference station to find a position and have significantly less precision (1–2 inches) than campaign GPS. HVO completes these surveys occasionally along Hilina Pali, Kānenuiohamo, and the summit of Kīlauea.

This past May, HVO completed the Mauna Loa GPS campaign survey, visiting 32 sites across the volcano. Along with Mauna Loa and Kīlauea, HVO also surveys Hualālai and Haleakalā every 3–5 years as part of our volcano monitoring program to keep a long-term record of the background deformation (“baseline”) of these quiet but still active volcanoes. Baselines are extremely important for potentially active volcanoes. The inactive periods of time help scientists create an accurate comparison point for when the volcano does become restless. To learn more about GPS read this Volcano Watch.

The use of continuous and campaign GPS instruments together helps HVO scientists gain a better understanding of what might be occurring below the surface of our volcanoes and the time scale these changes take place. These measurements can reveal underground magma movement within the volcano, and have proved to be an essential tool in monitoring the internal conditions of the magmatic storage system.