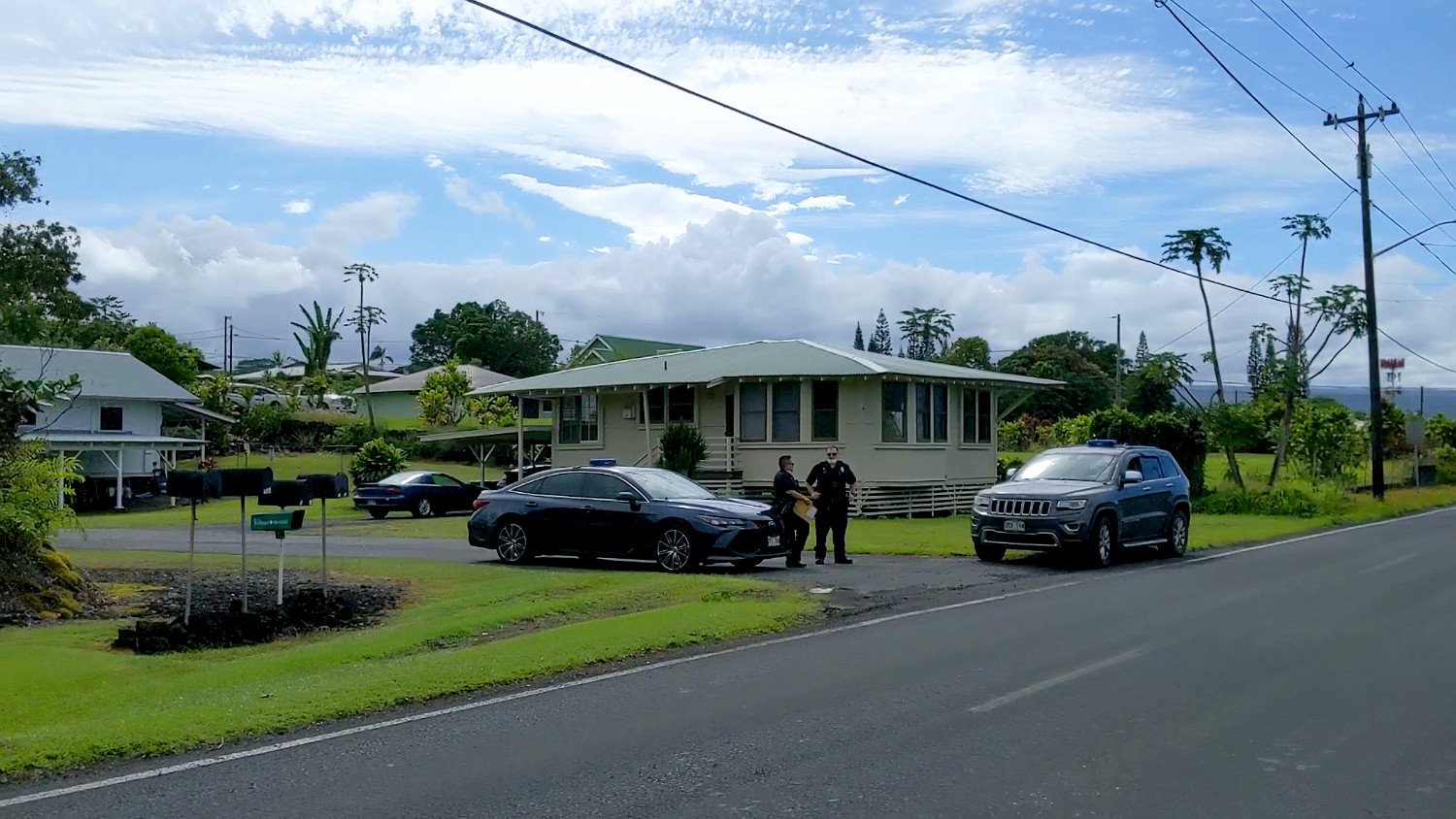 photo shows police officers on Friday at the scene of the officer-involved shooting.

HILO, Hawaiʻi - The Friday incident is the second deadly officer-involved shooting at a Hilo residence this week.

(BIVN) – Hawaiʻi police say they shot and killed a man who attacked them with a knife at a vacant Hilo home on Friday.

Kilauea Avenue between Ohea and Puainako Streets was closed for a few hours as police investigated. The road is now open.

Hawai’i Police are investigating an officer Involved shooting that occurred in the South Hilo District this afternoon.

At 11:20 a.m. today (June 18) patrol officers in Hilo responded to a residential break in at the 1800 block of Kilauea Avenue in Hilo. Officers entered the vacant home and hiding in one of the bedrooms was a man armed with two knives. The unidentified male suspect cut an officer on the arm with one of the knives. Two of the responding officers fired shots from their duty weapons killing the suspect.

At this time the police are still investigating the matter and will release more details as they become available.

The criminal investigation division and office of professional standards is on scene conducting an investigation as is standard protocol in such incidents.

The police have closed a portion Kilauea Avenue temporarily while they continue this investigation.

The injured officer was taken to Hilo Medical Center for treatment and is in stable condition following the incident.

We ask for patience as we work through this critical incident and allow the investigators to do their jobs so that all the pieces of this terrible incident can be put together. Our thoughts are with the effected families at this time. This is the second such attack against a police officer within a week.

Just five days ago, 34-year-old Ryan Yukiharu Santos died from a single gunshot wound to the left shoulder area during an officer involved shooting at a residence on Mokuhonua Lane in Hilo.

South Hilo Patrol officers were responding to a reported domestic on Sunday evening, June 13, when Santos fired multiple shots at officers and their marked police vehicles. Santos’ grandfather also died from an acute heart attack which he suffered during the course of this incident. The officers involved in the incident were placed on administrative leave pending an internal review.

Hawaiʻi County Mayor Mitch Roth issued a statement, saying: “First and foremost, I would like to extend my sincerest appreciation to our men and women in blue who risk their lives daily for the health and safety of our community here on Hawaiʻi Island. The events that took place this week are extremely rare and stark reminders of the threats that each officer faces when they step out their door and away from their families every day. On both occasions, officers were attacked and their lives threatened. On both occasions, officers secured the scene and did what was necessary to protect themselves and neighboring community members from harm. Our thoughts and prayers are with the families of the fallen, as we know no loss of life goes without grief. As we move forward from tragedy, I ask that we remember that we are all one ʻohana and that by building stronger, healthier, and happier communities, we can hope to avoid tribulations such as these in the future.”

UPDATE – The Hawai’i Police Department provided this new information later in the day:

At 11:20 a.m. today (June 18), patrol officers in Hilo responded to a residential alarm and possible burglary at a home located on the 1800 block of Kilauea Avenue in Hilo. Upon arrival, officers determined that the home had been forcibly entered. Officers entered the vacant home and began to clear the home room by room, calling out that they were the police and making their presence known. During the check of the home officers encountered a locked bedroom door. After conducting additional checks of the exterior of the home, officers returned and breached the door when one officer was immediately attacked by a male suspect with a large knife. The officer was struck in the arm with the knife and fired his duty weapon at the suspect. Another officer on scene also fired his weapon and the suspect was killed. The suspect was in possession of two knives when he attacked the officer.

The injured officer, who fired his weapon at the suspect, is identified as a 12 year veteran of the force. He was treated and released from Hilo Medical Center this afternoon. The second officer who fired his weapon has been on the force just over one year. A third officer was also present at the scene and did not discharge his firearm.

The suspect has been identified as a 31-year-old male with no permanent address. His name is being withheld pending notification of his next of kin. An autopsy will be conducted to determine the exact cause of death.