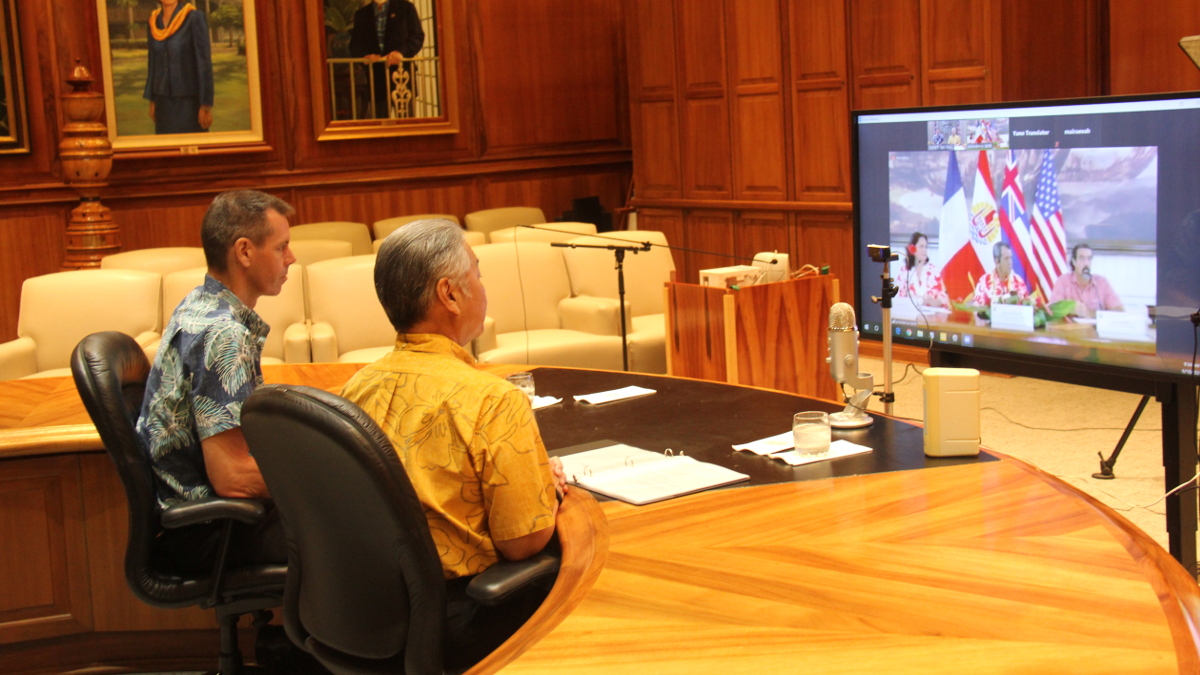 photo of the virtual announcement taken by Governor David Ige

HONOLULU, Hawaiʻi - Starting on June 21, travelers from French Polynesia will soon be able to bypass the State’s mandatory 10-day quarantine.

(BIVN) – Travelers coming to Hawaiʻi from French Polynesia will soon be able to bypass the State’s mandatory 10-day quarantine if they take a COVID-19 test from a trusted testing partner.

Governor David Ige on Friday announced that the program will start on June 21, 2021. The tests will be taken in French Polynesia, no earlier than 72 hours prior to departure. The test result must be negative to bypass the quarantine.

The Hawaiʻi State Department of Health has approved the use of the COVID-19 Nucleic Acid Amplification Test (NAAT) conducted by the Institut Louis Malardé for the pre-travel test, the State reported.

“I am very grateful to President Fritch and all those in the French Polynesian government who have worked hard to make our pre-travel testing program available to your residents,” Gov. David Ige said in a news release. “Many of Hawaiʻi’s residents have family in Tahiti, and welcoming our guests from French Polynesia to Hawaiʻi is an important step in maintaining the close relationship between our two regions.”

“I consider that the resumption of air service with the Hawaiian Islands as of August 7, is the recognition by your State of the collective efforts made both by the country’s authorities, by our health personnel but also by our population slowdown of the circulation of COVID-19 in our territory,” said President of French Polynesia, Édouard Fritch.

“We are really very happy that your discussions with the Louis Malardé Institute and our Ministry of Tourism are now allowing the resumptions of rotations between Hawaiʻi and French Polynesia,” said Nicole Bouteau, Minister of Tourism and Labor.

Later that day, Hawaiian Airlines announced the resumption of its Tahiti service.

“It’s exciting to see the program that the governments of our two regions have worked closely on over the last several months come together. Hawaiʻi and French Polynesia have been successful in our fight against COVID-19, and today’s announcement is a reflection of our continued progress against the disease,” said Peter Ingram, CEO of Hawaiian Airlines. “Hawaiian has been flying to Tahiti since 1987 and we are pleased to once again connect our South Pacific guests with aloha.”

In addition to the state’s program, effective January 26, 2021 the Centers for Disease Control and Prevention (CDC) is requiring proof of a negative COVID-19 test or documentation of having recovered from COVID-19 for all air passengers arriving from a foreign country to the United States.

For international travelers coming to the State of Hawaiʻi, only tests from Trusted Testing Partners will be accepted for purposes of by-passing the state’s 10-day traveler quarantine.

On January 21, 2021, the President of the United States issued an executive order requiring, among other things, that masks must be worn at airports and on airplanes. The federal government is also contemplating additional measures relating to periods of self-quarantine or self-isolation and/or testing after entry into the United States. For the time being, the state is making no changes to the Safe Travels program.