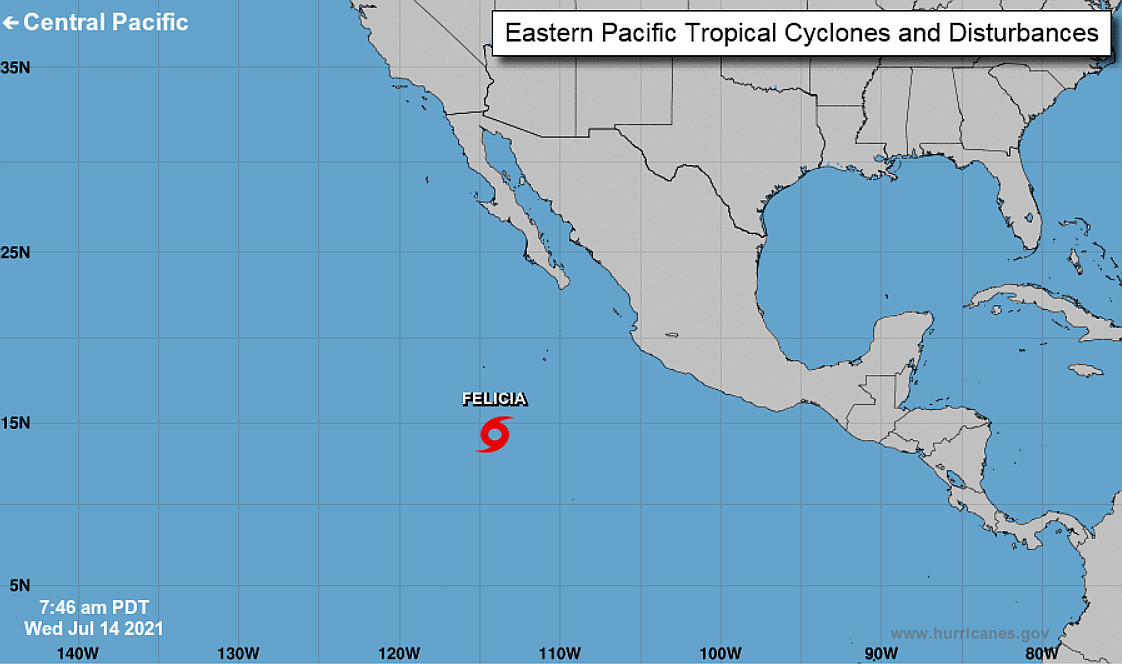 Graphic from the National Hurricane Center

HONOLULU, Hawaiʻi - Felicia is expected to become a hurricane by tonight or Thursday, the National Hurricane Center says. The storm is far from Hawaiʻi.

(BIVN) – Tropical Storm Felicia has formed in the Eastern Pacific, and is expected to quickly strengthen into a hurricane, far to the east of Hawaiʻi.

As of Wednesday morning, Felicia was about 655 miles south southwest of Baja California, moving west northwest at 15 mph. The National Hurricane Center says this motion is expected to continue with a decrease in forward speed through Thursday.

Maximum sustained winds have increased to near 50 mph (85 km/h) with higher gusts,” forecasters wrote. “Additional strengthening is likely and Felicia is forecast to become a hurricane tonight or Thursday.” 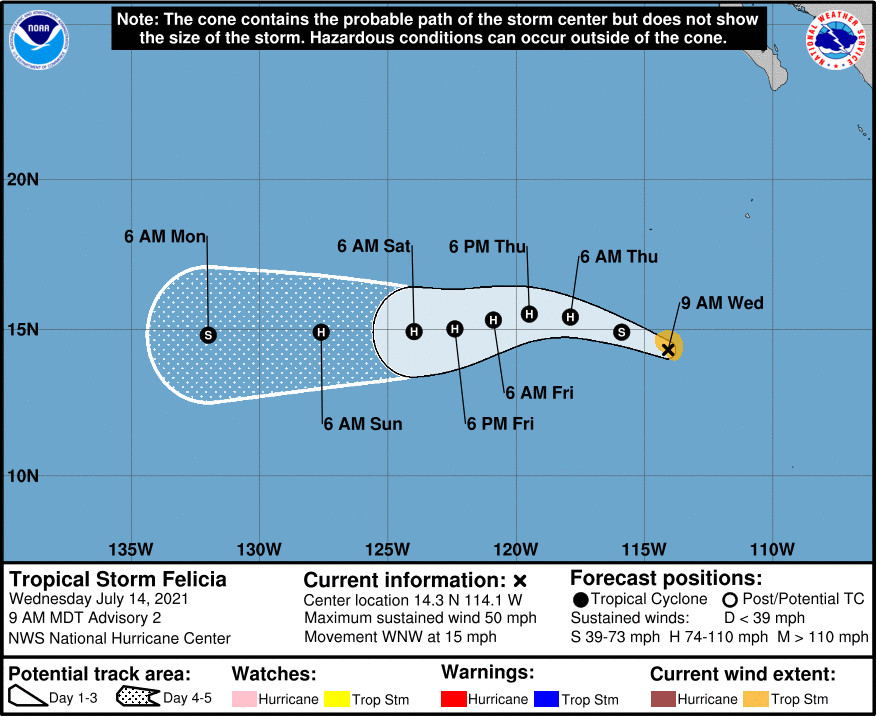 It is too early to say if the storm will have any impact on weather in Hawaiʻi.

From the National Hurricane Center discussion on Wednesday morning:

Recent satellite data indicate that the tropical cyclone has continued to organize this morning. An AMSR2 microwave pass around 0900 UTC revealed a well-defined banding feature that wrapped more than half-way around the center and early-light visible images show a developing CDO with the center located beneath the eastern portion of the cold cloud tops. Based on Dvorak T-numbers of 3.0 and 2.5 from TAFB and SAB, respectively, the initial intensity was increased to 40 kt on a Tropical Cyclone Update issued at 1315 UTC. With the continued increase in organization, the advisory intensity has been raised to 45 kt.

Felicia is located over warm SSTs and in an area of low vertical wind shear. Given the recent development of a small inner-core, it seems likely that Felicia will continue to strengthen during the next couple of days. The only caveat appears to be nearby dry air that could get entrained into the circulation of the relatively small tropical cyclone and cause some disruptions in the intensification process. Although most of the intensity guidance is not extremely bullish and the rapid intensification probabilities are not particularly high, the NHC forecast predicts steady strengthening and brings Felicia to hurricane status within 24 hours. The NHC wind speed forecast is in best agreement with the HFIP corrected consensus model, which is at the upper-end of the guidance.

The tropical storm is moving west-northwestward or 285/13 kt. A mid-level ridge to the north of Felicia should steer the storm west-northwestward to westward during the next 12-24 h. After that time, the orientation of the ridge shifts slightly which is expected to cause Felicia to turn west-southwestward with some decrease in forward speed during the middle portion of the forecast period. The dynamical model guidance is in reasonably good agreement, and the NHC forecast lies near the TVCE consensus aid. The guidance envelope did shift a little southward from the previous cycle, and the new NHC forecast has been modified accordingly.