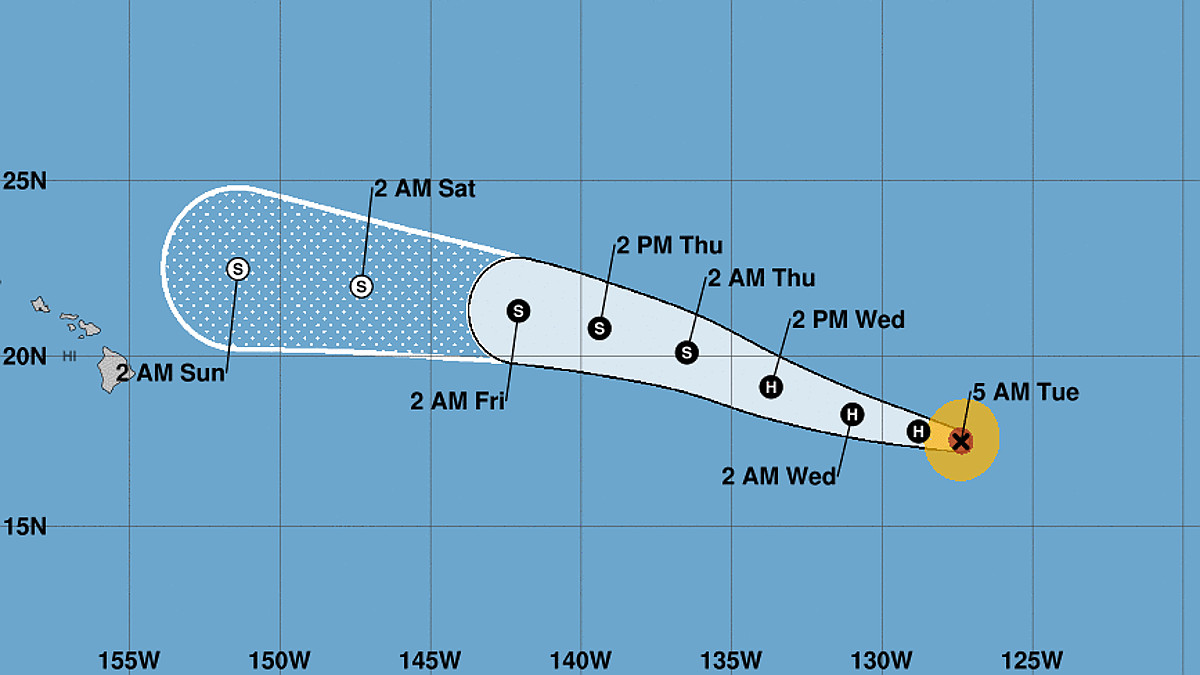 HAWAIʻI ISLAND - Linda still has characteristics of an annular hurricane with a large circular eye, the National Hurricane Center reports.

(BIVN) – The eye of Hurricane Linda was 1,820 miles east of Hilo as of this morning, and the storm was is expected to slowly weaken as it moves towards the Central Pacific. Linda could move into the Central Pacific Hurricane Center’s area of responsibility as a weakening tropical storm as early as late Thursday.

“Maximum sustained winds are near 85 mph (140 km/h) with higher gusts,” the National Hurricane Center reported on Tuesday morning. “Slow weakening is forecast over the next several days.”

The National Weather Service in Honolulu said on Tuesday morning that “a convective shower regime may develop once again Sunday through early next week as the remnants of Linda pass by to the north of the islands,” disrupting trade winds and possibly increasing surf along east facing shores late this week.

Linda has not changed much during the past several hours. The system still has characteristics of an annular hurricane with a large circular eye (a little more than 30 n mi in diameter) and a ring of deep convection completely surrounding that feature. The convection in the eyewall appears a little less symmetric than it was a few hours ago, however. A blend of the latest Dvorak estimates from TAFB, SAB, and automated values from CIMSS at the University of Wisconsin support nudging the intensity down to 75 kt.

Even though Linda is over cool 25-26 deg C waters, research has proven that tropical cyclones that are characterized by an annular cloud pattern usually weaken more slowly than the climatological rate in the eastern Pacific, and we expect Linda to be in that category during the next day or so. Nonetheless, a combination of cool SSTs and drier air should induce a slow weakening trend. The models suggest that an increase in southerly shear is likely toward the end of the forecast period, and that could assist in the storm becoming post-tropical by then. The NHC intensity forecast lies near the high end of the guidance in the short term and then falls in line with the majority of the guidance from days 3-5.

Linda is moving nearly due westward at 265/9 kt. The track forecast reasoning appears fairly straightforward. A mid-level ridge is expected to remain anchored to the north of Linda, which should keep the storm on a westward to west-northwestward track during the next several days. The models are tightly clustered, and only small changes were made to the previous track forecast. Based on this prediction, Linda is expected to cross into the Central Pacific basin in 60-72 h and be located to the north or northeast of the Hawaiian Islands late this weekend and early next week.