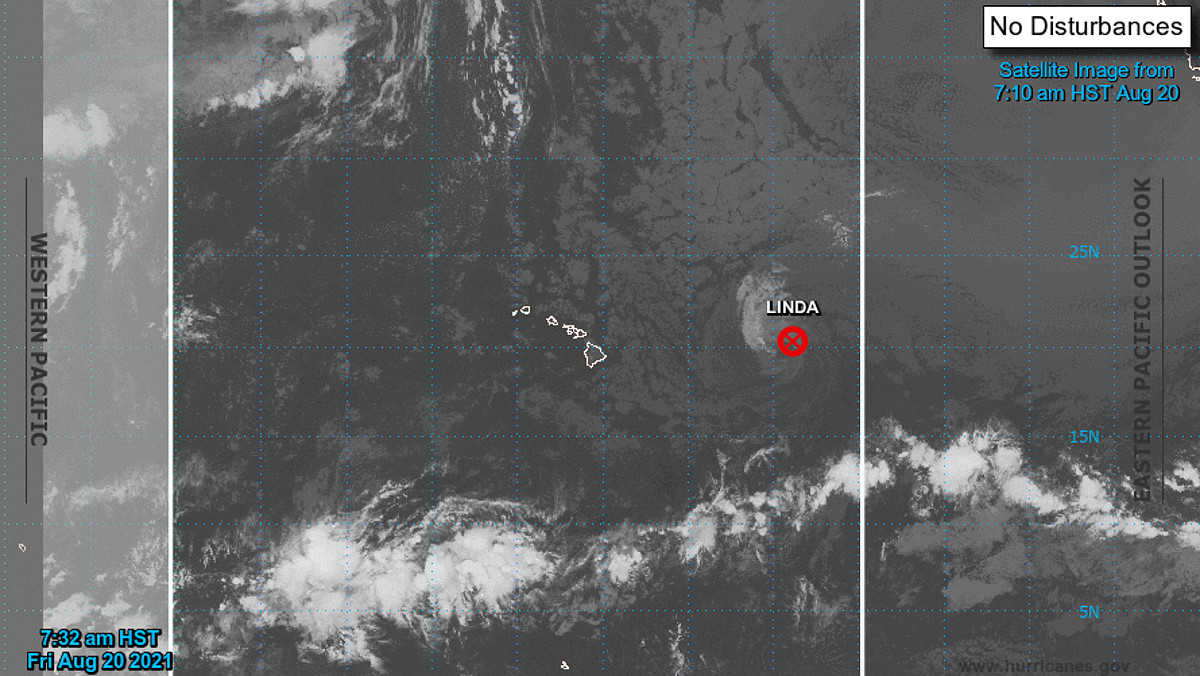 HAWAIʻI - Flash flooding and damaging winds can't be ruled out, as the remnant low moves over the eastern end of the state on Sunday.

(BIVN) – Former Hurricane Linda has weakened into a post-tropical cyclone.

At 5 a.m. HST, the Central Pacific Hurricane Center issued the last advisory on Post-Tropical Cyclone Linda, which is located about 685 miles east of Hilo, Hawaiʻi.

“Although Linda has become post-tropical, remnants of the system are expected to impact portions of the main Hawaiian Islands Sunday and Monday,” the National Weather Service stated on Friday morning. “Interests in Hawaii should monitor the progress of the remnant low.”

The Honolulu-based forecasters wrote this in an early morning discussion:

The latest forecast from the Central Pacific Hurricane Center has the remnant low over or around the eastern end of the state Sunday, then the western end Sunday night through Monday. As stated above, impacts associated with this feature will highly depend on the track as it moves through. If the low passes the islands to the north, expect lighter winds and limited rainfall accumulations. A track through or south of any of the islands would result in a wetter and windier pattern. Flash flooding and damaging winds can’t be ruled out if this latter scenario were to unfold. Confidence in the details will continue to increase as we head into the weekend. 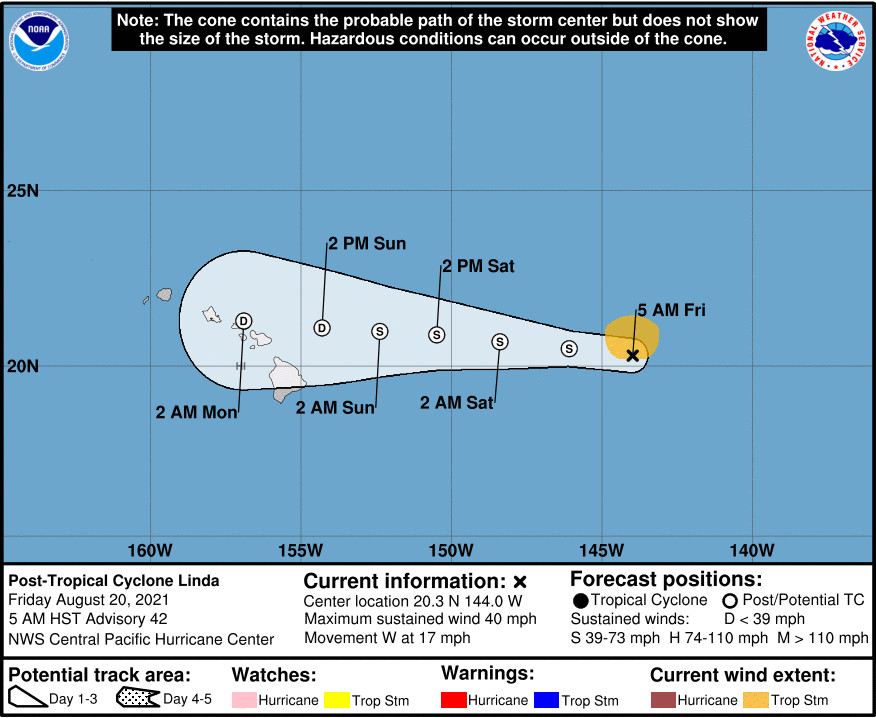 From the Central Pacific Hurricane Center at 5 a.m. HST:

Linda’s time as a tropical cyclone has come to an end. Infrared and VIIRS day-night satellite imagery depict an elongating low cloud swirl, and deep convection has been absent over the center for nearly 24 hours, thus Linda is deemed to be post-tropical. The initial intensity estimate of 35 kt for this advisory remains heavily influenced by a recent scatterometer pass that indicated winds to 40 kt north of the center.

The initial motion estimate is 280/15 kt, with Linda being steered by a persistent low- to mid-level ridge to the north. Tightly-clustered track guidance indicates that the ridge will continue to drive the post-tropical remains of Linda toward the west, with a slight reduction in forward speed tonight and Saturday. The guidance has trended southward over the last couple of days, and the official forecast indicates that remnants of Linda will impact portions of the main Hawaiian Islands Sunday and Monday, in line with the corrected consensus guidance HCCA, and the GEFS mean.

Compared to the recent rapid weakening, a relatively slow rate of decay of the wind field is expected over the next couple of days. As the system gradually spins down, gale force winds north of the center will be slow to diminish, due to the gradient between the high to the north and the remnant low. Some sporadic deep convection may also occur, but the combined effects of dry air in the mid- and upper-levels and increasing vertical wind shear will prevent regeneration into a tropical cyclone, and lead to system dissipation by day 4. This is supported by the reliable global models, as well as the intensity consensus IVCN.