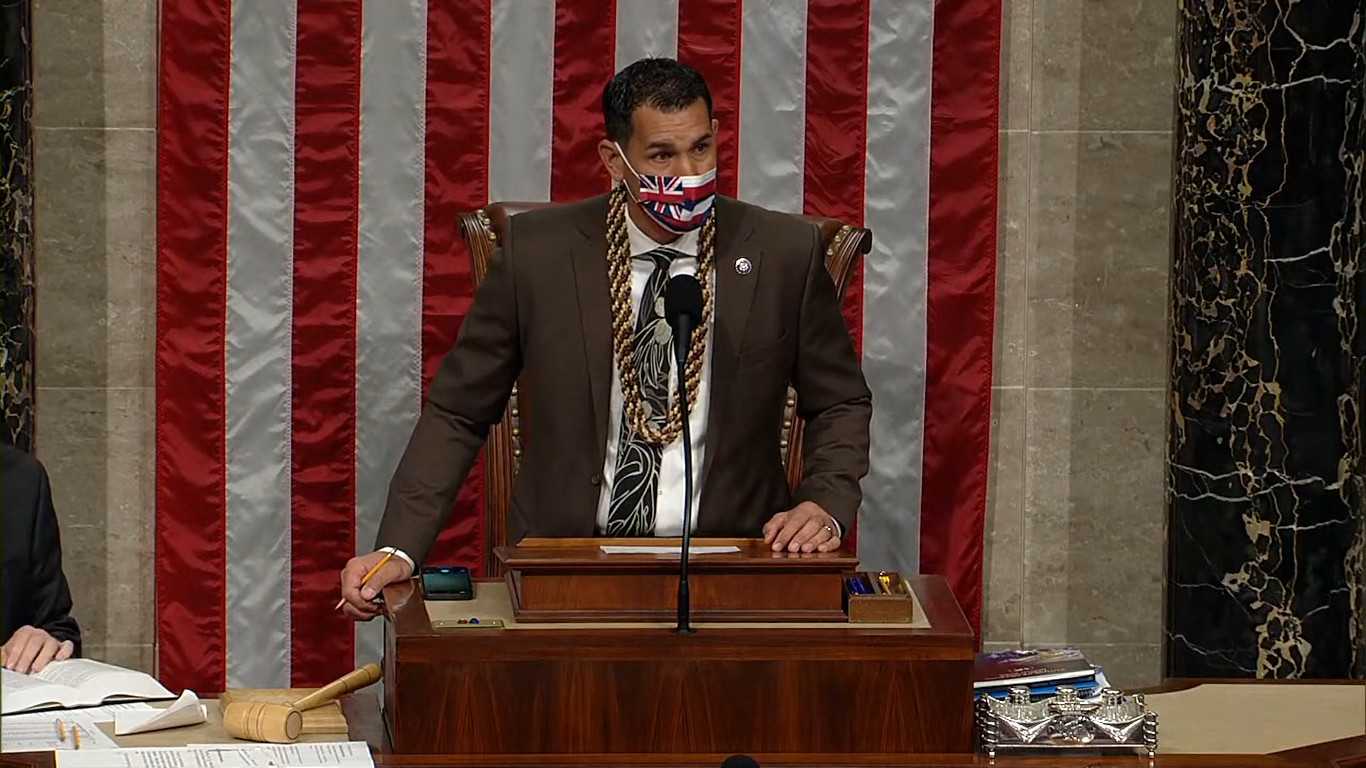 Rep. Kahele presides temporarily over the House vote as the Infrastructure Investment and Jobs Act is passed.

WASHINGTON - The U.S. House of Representatives voted to pass the $1 trillion Infrastructure Investment and Jobs Act, with the support of Hawaiʻi's elected representatives.

(BIVN) – Billions in federal funds will be allocated for Hawaiʻi roads, bridges, and water systems following the U.S. House of Representatives vote to pass a $1 trillion, bipartisan infrastructure deal.

At least $2.8 billion in estimated funding will be available to Hawai‘i under the Infrastructure Investment and Jobs Act. Hawaiʻi’s congressional delegation supported the legislation.

From a statement by Congressman Kaialiʻi Kahele (HI-02) posted to social media:

“Tonight I voted to deliver the Infrastructure Investment and Jobs Act to the President’s desk and advance the Build Back Better Act.

“Together, the Build Back Better Act and the Infrastructure Investment and Jobs Act represent a historic investment in the most pressing needs facing our nation.

“At the personal request of the President of the United States, and with the firm commitment from fellow members of the Democratic Caucus to pass the Build Back Better Act no later than the week of November 15th, I voted to deliver the Infrastructure Investment and Jobs Act today.

“Late tonight I joined a majority of my U.S. House colleagues in voting for final passage of the historic $1 trillion Bipartisan Infrastructure Plan, our largest-ever investment in America’s roads and bridges, water infrastructure, climate resilience projects, internet access and much more,” said Congressman Ed Case (HI-01). “For our Hawaii, this means over $2 billion dollars in federal investment in our own crumbling infrastructure and in the thousands of jobs and economic generation it will yield.”

“I also voted with a majority of my House colleagues to advance the $1.75 trillion Build Back Better package, which would be our largest-ever investment in climate change and our social safety net”, said Rep. Case. “We are on course to pass this equally historic bill out of the House and send it to the Senate the week of November 15th, subject to Congressional Budget Office confirmation of the measure’s revenues and expenses.”

The bill now heads to the president’s desk to be signed into law. President Biden called the legislation a “once-in-a-generation investment that’s going to create millions of jobs modernizing our infrastructure” that will “turn the climate crisis into an opportunity.”

“And it puts us on a path to win the economic competition of the 21st century that we face with China and other large countries and the rest of the world,” President Biden stated.

The office of U.S. Sen. Brian Schatz, who voted to pass the Act in the Senate in August, provided this breakdown:

Roads, bridges, and major projects – at least $1.5 billion for Hawai‘i

Airports – at least $246 million for Hawai‘i

Broadband – at least $160 million for Hawai‘i

Clean energy and grid – at least $3 million for Hawai‘i

“Billions of federal dollars are heading to Hawai‘i to help us fix up our roads and bridges, and create thousands of new jobs across the state,” said Senator Schatz, Chairman of the Senate Appropriations Subcommittee on Transportation and Housing. “This massive investment will make it safer and easier for Hawai‘i families to get around, while helping grow our local economy,” Sen. Schatz said.