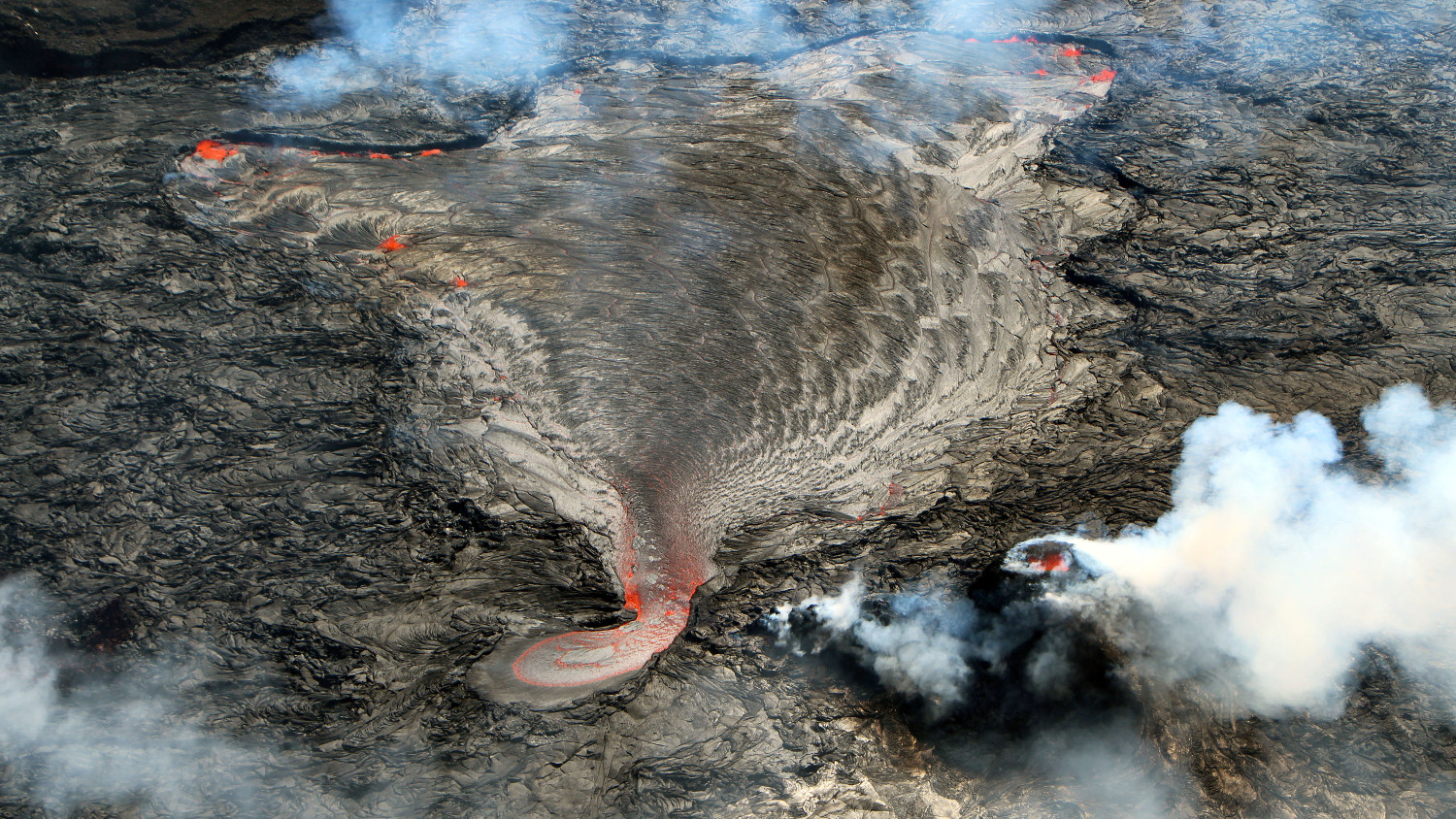 USGS: "The western part of Kīlauea's current summit eruption, showing the active part of the lava lake in Halema‘uma‘u crater. This lava lake is being fed from a small pond to the north of the impressive west vent. This photo was taken around 9:30 a.m. on Tuesday, February 1, 2022, from the west rim of Halemaʻumaʻu." (USGS photo by D. Downs) 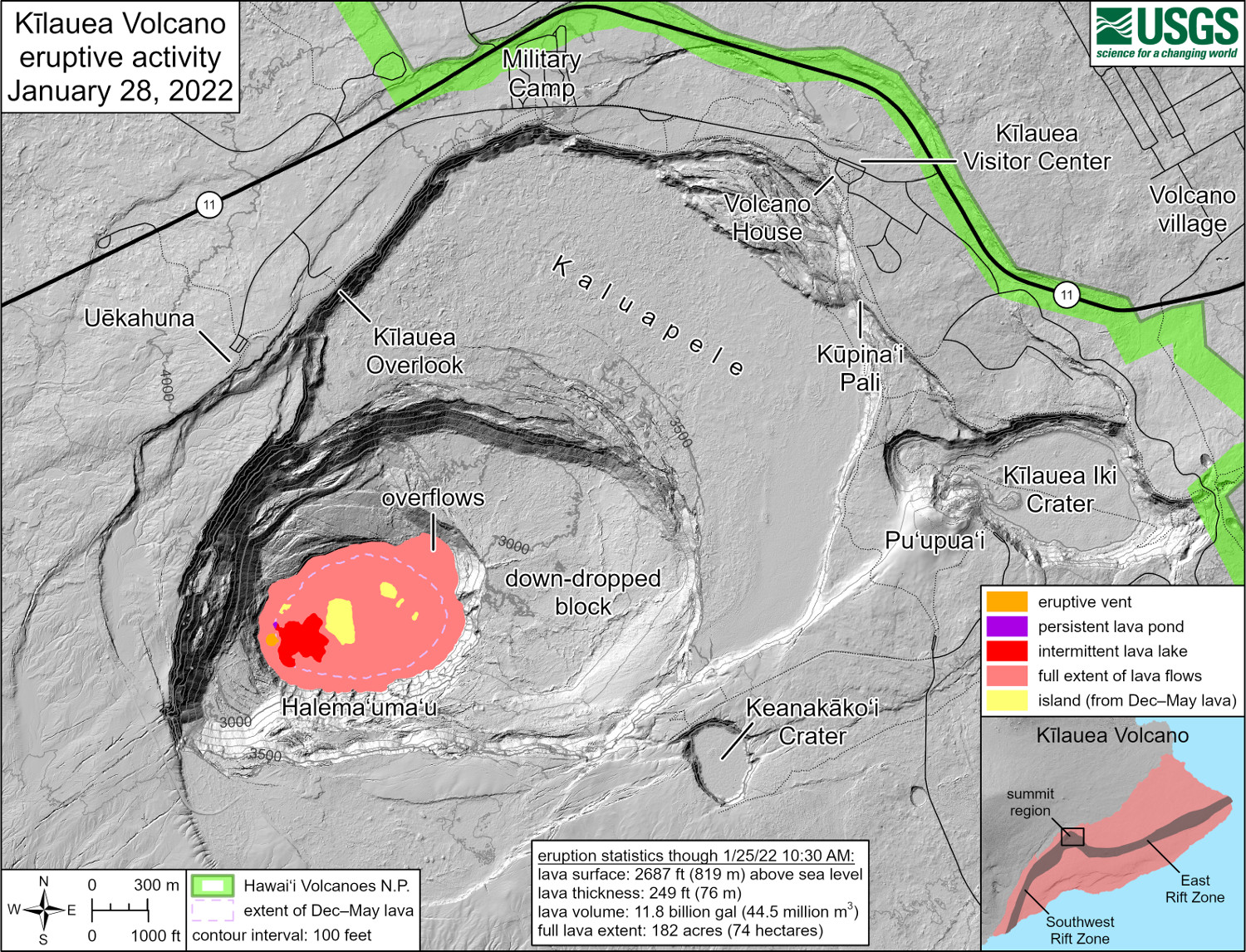 USGS: “This reference map depicts the ongoing Kīlauea summit eruption on January 28, 2022. One eruptive vent is intermittently active within Halema‘uma‘u, along the western edge of the lava lake. When this vent is effusing lava, it pours into the active portion of the lake, colored red on this map. During eruptive pauses, the only active lava is within a pond just north of the vent, colored dark purple on this map.”

(BIVN) – The summit eruption of Kīlauea volcano continued on Wednesday, although scientists say the activity in Halemaʻumaʻu crater “has diminished in vigor this morning.”

“Lava effusion has slowed in association with summit deflation that began just before midnight,” a USGS Hawaiian Volcano Observatory update stated. “These trends suggest that the summit eruption is heading into another pause.”

Kīlauea has exhibited off-and-on activity in recent weeks, as the summit eruption that began on September 29, 2021, is ongoing.

Halemaʻumaʻu Lava Lake Observations: Effusion of lava from the western vent within Halemaʻumaʻu crater has been slowing this morning, and the active lava lake in the western portion of the crater has been stagnating. Before the slowdown, activity yesterday included multiple, intermittent ooze-outs of lava along the northern and eastern margins of the crater; some of these ooze-outs remain weakly active at this time. Additionally, a small spatter cone—less than 6 meters (20 feet) tall—near the eastern end of the crater was erupting lava fountains up to approximately 10 meters (33 feet) in height for several hours last night, before shutting down early this morning. These lava fountains fed a short lava flow that was contained near the eastern margin of the crater.

While stagnating, the surface of the active lava lake has also dropped about 9 meters (30 feet) since 11 p.m. HST last night, in association with summit deflation and presumably reflecting a decrease in lava supply. As of 8 a.m. HST this morning, the active lava lake is approximately 81 meters (266 feet) deep relative to when lava emerged on September 29, 2021. Measurements on January 25 indicated that the total lava volume effused since the beginning of the eruption was approximately 45 million cubic meters (12.0 billion gallons) at that time.

Summit Observations: Summit tiltmeters began tracking deflationary tilt just before midnight. The rate has slowed so far this morning, but summit deflation continues at this time. Volcanic tremor associated with the eruption has also dropped off and presently continues at reduced strength, while earthquake activity in the summit region remains below background level. A sulfur dioxide (SO2) emission rate of approximately 4,500 tonnes per day (t/d) was measured yesterday, February 1, when eruptive activity was more vigorous than this morning.

Scientists also said that no unusual activity has been noted along Kīlauea’s East Rift Zone or Southwest Rift Zone, and that low rates of ground deformation and seismicity continue along both. There are no indications of the eruption migrating elsewhere on the Hawaiʻi island volcano.