Video courtesy USGS Hawaiian Volcano Observatory and Tropical Visions Video. A synthesized voice was utilized in the narration for this story. 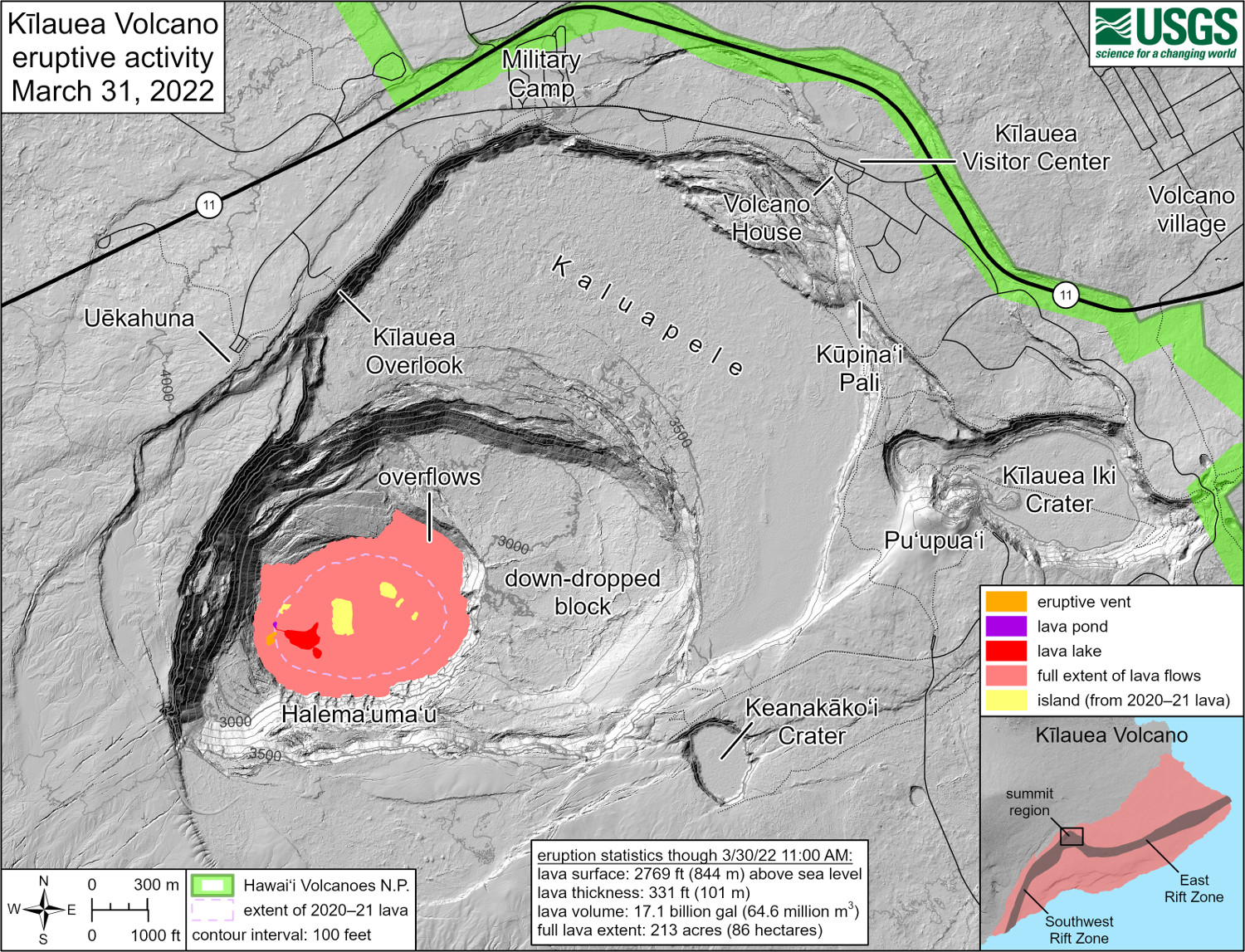 USGS: “This reference map depicts the ongoing Kīlauea summit eruption on March 31, 2022. One eruptive vent (orange) is active within Halema‘uma‘u, on the western side of the crater floor. An adjacent pond (purple) is feeding lava to a larger lake (red); though at times the lava level has dropped and circulation has diminished, the pond and lake have consistently hosted active lava in recent weeks. The eruption statistics provided here are current as of the last HVO overflight on March 30, 2022; the volume-averaged surface of the whole lava lake was approximately 2,769 ft (844 m) above sea level at that time. Lava is presently visible from three public visitor overlooks in Hawai‘i Volcanoes National Park: Keanakāko‘i Overlook and Waldron Ledge can see the eruptive vent and lava lake, while Kīlauea Overlook can occasionally see lava ooze-outs in the southeast part of the crater.”

(BIVN) – As the month of April begins, the eruption at the summit of Kīlauea enters its sixth month, and the effusion remains steady. Active lava now persists at the summit even during deflationary trends in tilt, whereas before it would disappear from view.

All recent activity has been confined to the crater within Hawaii Volcanoes National Park, and there are no indications of activity migrating elsewhere on Kīlauea.

A recent overflight by Tropical Visions Video provided an overview of the evolving eruption at the summit. Lava was erupting from a vent into an active lava lake, and onto the crater floor. More recently, scientists with the USGS Hawaiian Volcano Observatory captured a closer view of the same activity.

Video recorded on March 24 shows lava from the main lake pouring down into a smaller lake in the western portion of the crater.

On March 29, scientists captured more views of the lava lake, which occupies a little over 2 percent of the surface of the entire crater floor. Spattering was present along the margin. Lava could also be seen pouring from a small cone in the northeast portion of the crater floor.

HVO also documented crustal foundering in an area of ponded lava in the central portion of the crater floor. Segment by segment, cool lava crust on the surface of the lake is overridden by less-dense liquid from below, causing the crust to sink into the underlying lava. Scientists say the density-driven crustal foundering leads to surface renewal, and occurs repeatedly throughout the life of a lava lake.

On that same day, a webcam recorded spattering from a cone that developed on the surface in the eastern part of the crater. HVO says the presence of these features demonstrates that molten material is present beneath the solidified surface of the crater floor.

Volcanic tremor remains above background levels, and the sulfur dioxide emission rate has been measured at approximately 3,100 tonnes per day. For now, the USGS Volcano Alert Level remains at WATCH, and the aviation color code remains at orange.