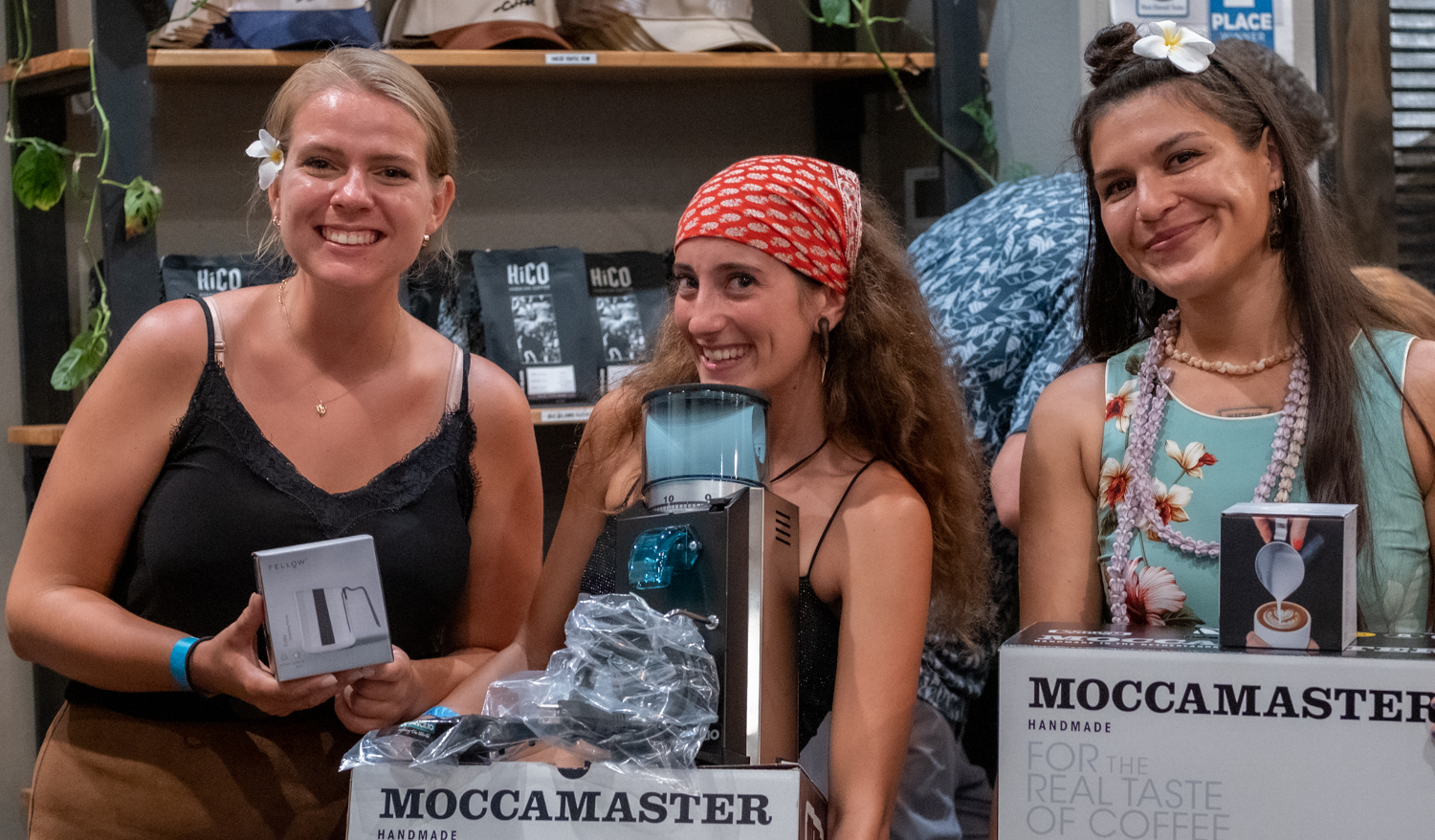 KONA, Hawaiʻi - The Hawaii Coffee Association Conference, held May 19 to 21, also awarded a Lifetime Achievement Award and named its Legislator of the Year. 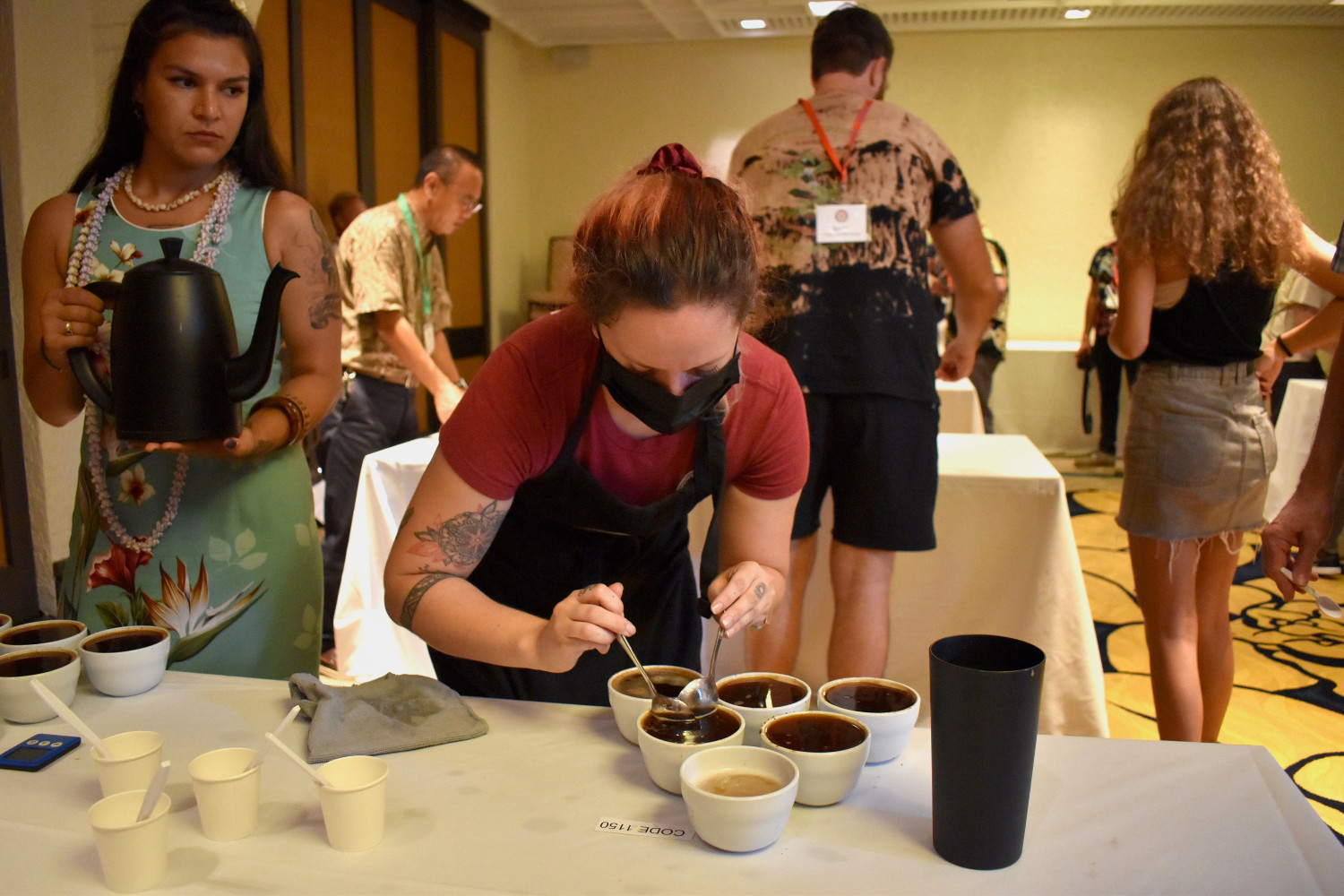 (BIVN) – The Hawaiʻi Coffee Association recently held its 27th HCA Conference at the Outrigger Kona Resort & Spa, where winners were crowned in cupping and barista competitions, supporters were honored, and new board members and officers were elected.

From the Hawaiʻi Coffee Association: 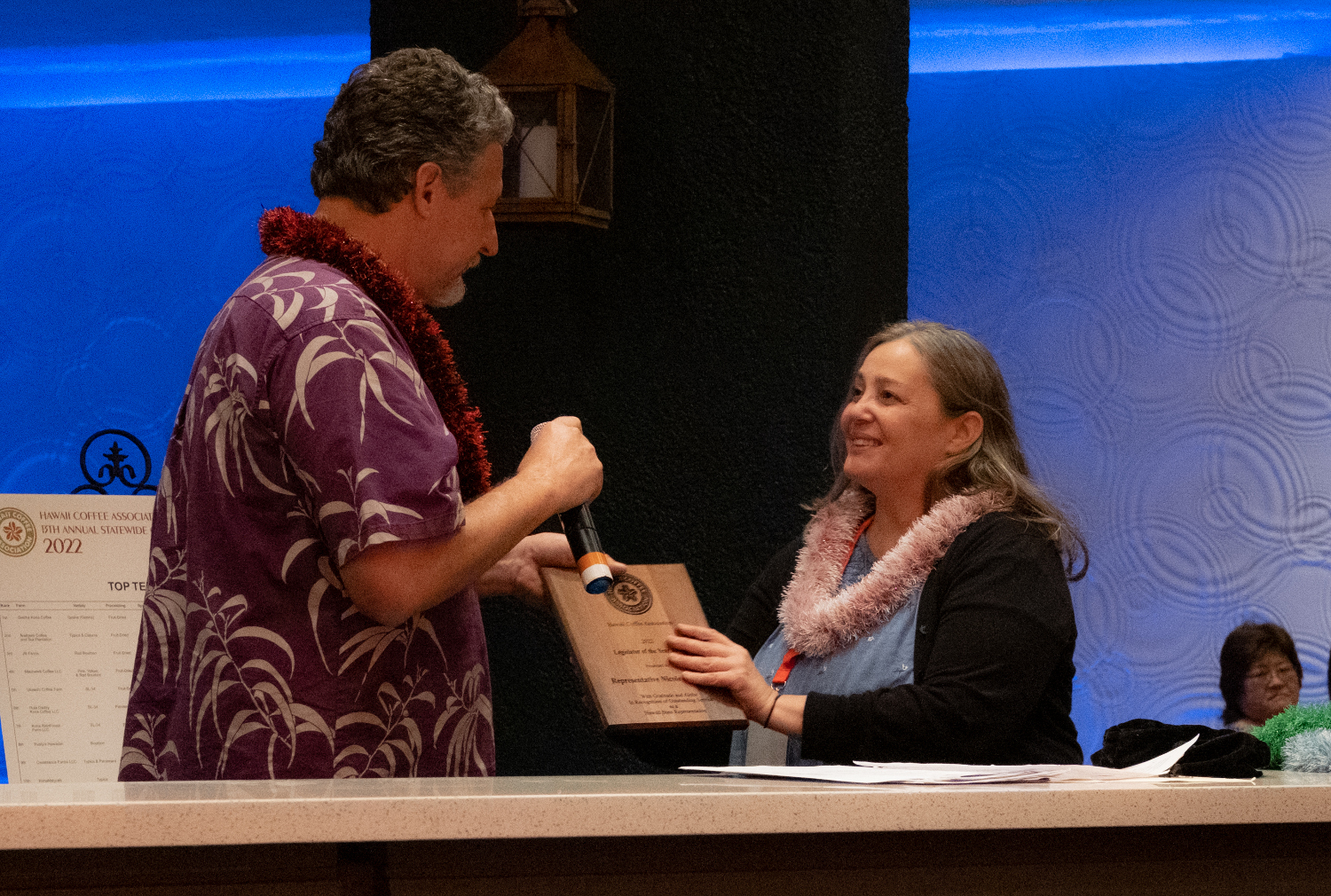 HCA also recognized David Gridley of Maui with the inaugural Lifetime Achievement Award and District 6 Rep. Nicole Lowen was named HCA’s 2022 Legislator of the Year. Lowen was lauded for her leadership on HB 1517, which sought to amend Hawaii’s minimum coffee blending ratio from 10% to 51%, while Gridley was hailed for a long and storied career in Hawaii’s coffee industry, dating back to HCA’s founding in 1996. 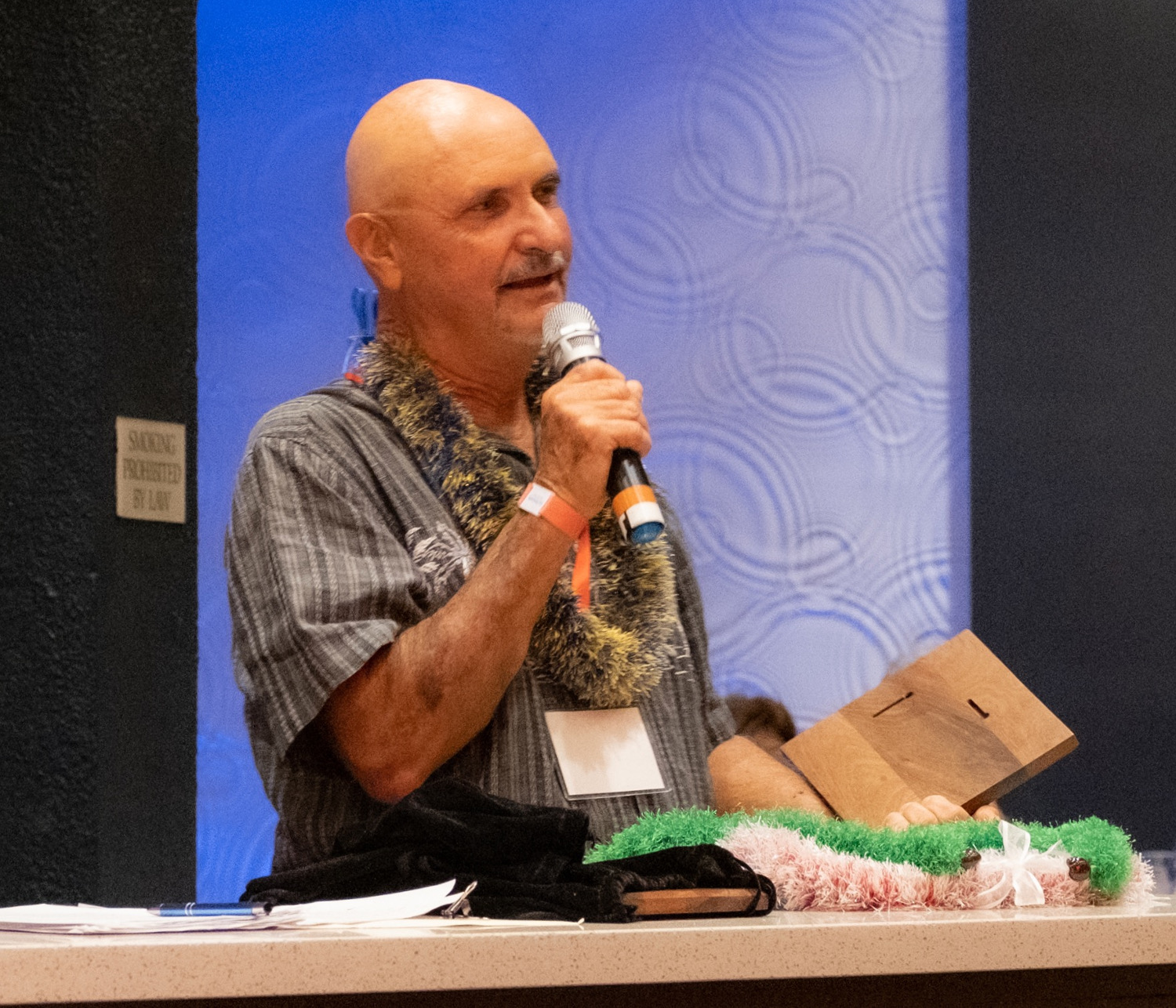 The program featured a full lineup of speakers sharing the latest efforts and progress on combating Coffee Leaf Rust (CLR). HCA has been working closely with multiple agencies, state and federal lawmakers, international partners, industry leaders and other stakeholders since the fall of 2020 to address CLR and acknowledged their response efforts.

“We were able to fast-track the permitting of two trans-lamimar fungicides to help growers manage the disease in the short-term,” noted HCA Executive Director Chris Manfredi. “We also have identified rust-resistant coffee varieties already being propagated in Hawaii. We hope to make these varietals available to growers as quickly as possible and identify, source and import other CLR resistant varietals from overseas.”

A field grafting workshop was also part of the conference program to help growers implement varietal replacement. Another on soil health underscored the importance of cover crops.

A highlight of the conference was a presentation on HCA’s new product traceability partnership with Oritain. The global company is building a statewide “Origin Fingerprint” to verify the origins of Hawaii-grown coffee. Manfredi says the effort is designed to thwart product counterfeiting, build marketability and ensure brand integrity.

“We will work with Oritain in the coming weeks and months to develop and implement a sampling plan with the goal of establishing “Origin Fingerprints” for Hawaii’s coffee growing regions,” detailed Manfredi. “We can then scientifically verify the origin of green and roasted coffee grown in Kaʻū, Kona, Maui, etc.”

The conference schedule also included a keynote by Jennifer “Vern” Long of World Coffee Research; an inaugural Seed-to Brew Roundtable; cupping and roasting workshops; and the election of HCA’s Board of Directors and officers.

Ninety-four entries vied in the 13th Statewide Hawaii Coffee Association Cupping Competition. Brittany Horn, HCA cupping committee chair and co-owner of Pacific Coffee Research, notes the competition “continues to get tighter and tougher each year,” adding this year’s field boasted a record top score of 87.45. The top three scoring coffees were from different districts on Hawaii Island: Kona, Hawaii (east side) and Ka‘u. All of them were fruit-dried coffees (natural process) and inoculated with a specified yeast strain at some point during the drying process.

The top-scoring coffee was a Gesha variety produced by Geisha Kona Coffee. Arakawa Coffee and Tea Plantation of the Hawaii District entered a blend of Typica and Caturra varieties placing second with a score of 87.30. JN Farms of Ka‘u received a score of 86.90 with a Red Bourbon variety.

“We encourage experimentation, testing new varieties, and innovative processing methods, because it is clear that growers who do this, and do it well, are rewarded with consistently elevated scores,” explains Horn. “As they say, rising tides raise all ships. So, my sincerest desire is the growers of these award-winning coffees share in their success by collaborating within our community and working together as we navigate the ever-changing landscape of the coffee value chain.”

The panel employed the standard Specialty Coffee Association’s cupping methodology and scoring format. Coffee cupping is a combination of art and science where coffees are evaluated and scored based on a variety of subtle characteristics: flavor, aroma, acidity, aftertaste, body, balance, overall cup experience, presence of sweetness, lack of defect and uniformity.

With a sole requirement of using locally grown coffee, baristas were asked to create a signature beverage to present to a panel of judges and the audience. Six competitors were judged on creativity, taste and presentation by Eric Dong of Merriman’s Restaurant and John Letoto and Kelleigh Stewart, both of Big Island Coffee Roasters.

Madeleine Longoria Garcia, who chaired the inaugural barista showdown, founded The Café Collective, which is a new HCA committee. “Our goal is to create opportunities to engage with the retail end of the Hawaii coffee supply chain—baristas, café owners and roasters,” explained Longoria Garcia. “We hope to create a more connected and resilient local coffee community.”

New Board and Officers Elected

HCA membership gathered to elect their new board and officers. The HCA’s new president is Fred Cowell of Kauai Coffee with Kona’s Tom Greenwell as vice president; Abigail Munoz of Monarch Coffee will serve as treasurer; and Brittany Horn will continue as secretary. Manfredi stepped down earlier this year after six terms as president to serve as HCA’s executive director.

The HCA Board of Directors features representation spanning a variety of businesses positioned throughout the coffee supply chain including growers, processors, wholesalers, roasters and retailers.

The Hawaii Coffee Association’s mission is to represent all sectors of the Hawaii coffee industry, including growers, millers, wholesalers, roasters and retailers. The HCA’s primary objective is to increase awareness and consumption of Hawaiian coffees. A major component of HCA’s work is the continuing education of members and consumers. Its annual conference has continued to grow, gaining international attention.