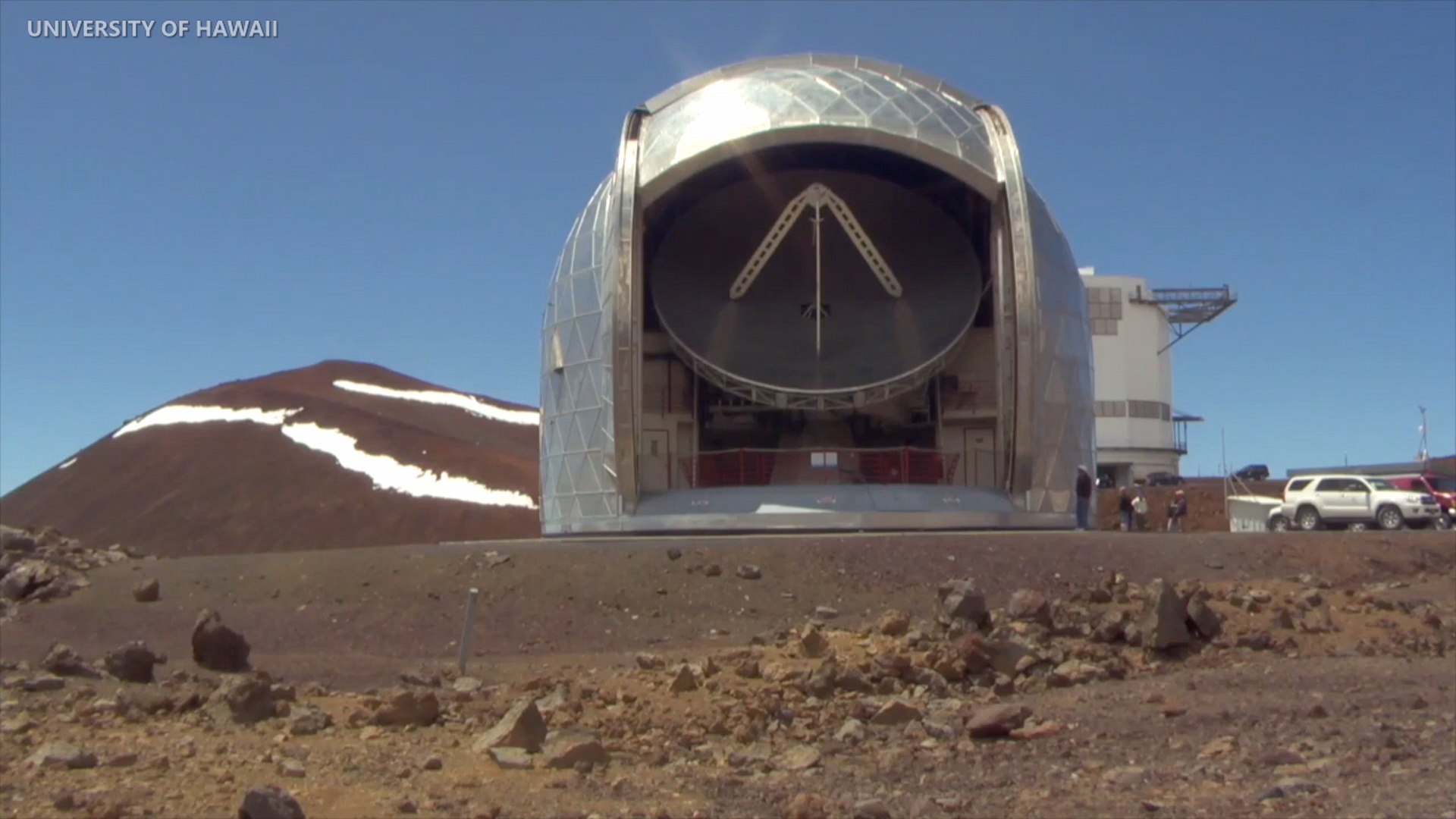 photo of the CSO from video courtesy University of Hawaiʻi

MAUNAKEA, Hawaiʻi - Caltech has received the necessary permits from the County and State of Hawai‘i, and has selected contractors for the deconstruction of the CSO.

The CSO on Maunakea has received final State and County permits, and selected contractors, for the deconstruction of the observatory.

From a Caltech news release:

Caltech has received the necessary permits from the County and State of Hawai‘i to begin the physical deconstruction of the Caltech Submillimeter Observatory (CSO) from Maunakea.

“Caltech is set to begin the deconstruction phase of the decommissioning later this summer, with removal and restoration completed within a year,” said Caltech physics professor and CSO Director Sunil Golwala. It will be the first observatory removed under the 2010 Decommissioning Plan for Maunakea Observatories.

The deconstruction will be in accordance with the Conservation District Use Permit (CDUP), which was issued by the state Department of Land & Natural Resources (DLNR) in January. The CDUP sets the terms and conditions that Caltech must follow during the decommissioning. Copies of the CDUP, the Final Environmental Assessment, the Site Decommissioning Plan, and other planning documents can be found here:

Caltech has retained a number of firms to participate in decommissioning. The general contractor for the deconstruction process will be Goodfellow Bros., LLC of Washington state. Goodfellow Bros. has had its Hawaii division for almost 50 years, with an office on Hawai‘i Island for over 30 years.

Pedro Foronda, PE, of the architectural infrastructure firm AECOM, Honolulu, will serve as the independent decommissioning construction monitor (IDCM). The IDCM will oversee the decommissioning on-site on a daily basis with the authority to stop work in the event of a potential or actual violation of the CDUP, the 2009 Comprehensive Management Plan for Maunakea Observatories (CMP), or the Decommissioning Plan. In accordance with the CMP, the Center for Maunakea Stewardship and the DLNR concurred with the selection.

Caltech also has selected M3 Engineering and Technology of Tucson, Arizona, as construction services administrator, to provide technical advice to the general contractor. Foronda and M3 will act as Caltech’s “owner representative.” ASM Affiliates of Hilo has been selected as the archeological monitor. Sustainable Resources Group Intn’l, Inc. (SRGII) of Kailua will do a pre-deconstruction biological survey and restoration monitoring. Unitek Insulation of Pearl City will undertake abatement of lead paint and mold, with monitoring and analysis of their work provided by Lehua Environmental of Kamuela. Danielle Frohlich of SWCA (Honolulu) will monitor for invasive species. A cultural monitor is still being sought.

The creation of the new Mauna Kea Stewardship and Oversight Authority, recently signed into law by Governor David Ige, will not impact the decommissioning.

“CSO will continue the deconstruction as planned, working closely with the new management authority and the Center for Maunakea Stewardship during this period of transition,” says Golwala. Caltech’s work to restore the site is expected to be complete in 2023, before the transition in management is fully in effect, and Caltech will continue to report results of restoration monitoring through 2026.

The cost of deconstruction and restoration is expected to be approximately $4M.

The CSO came online in 1987 and was used by scientists at Caltech and other institutions, including almost 200 student and postdoctoral researchers, to open a new submillimeter window on the universe. A summary of CSO’s contributions to astronomy and astronomical instrumentation are available here. All the astronomical instruments were removed from the facility in 2015 except the telescope. Prior to deconstruction of the observatory buildings, the CSO’s 10.4-meter submillimeter telescope will be removed for shipment to Chile, where it will continue its role as one of the world’s premier facilities for astronomical research and instrumentation development at submillimeter wavelengths.