Mauna Loa Volcano Activity Update (A synthesized voice was utilized in the narration for this story.)

HAWAIʻI ISLAND - Scientists write about the recent earthquake swarm under Mauna Loa, as they continue to keep a close eye on diverse monitoring datasets. 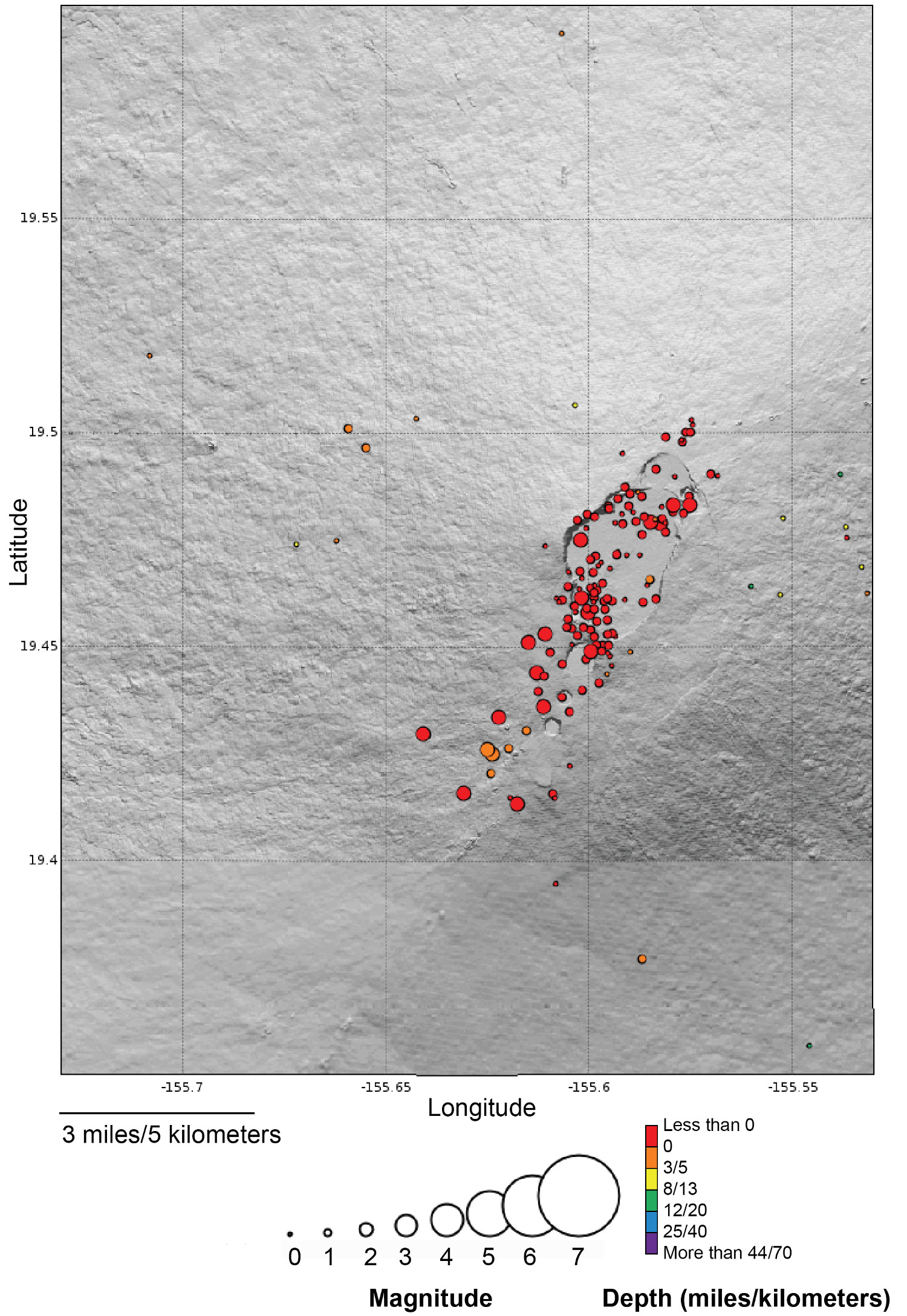 (BIVN) – Last week, scientists observed a swarm of earthquakes under Mauna Loa. The activity has since returned to background levels, and the volcano is not erupting. In the latest Volcano Watch article written by U.S. Geological Survey Hawaiian Volcano Observatory scientists and affiliates, the recent activity attributed to the “sleeping giant” is examined:

Covering over half of the Island of Hawai‘i, Mauna Loa is sometimes referred to as a “sleeping giant” because it hasn’t erupted in 38 years after erupting nearly every 7 years in the early 20th century. However, Mauna Loa occasionally stirs in its slumber and reminds us that it will someday awake and erupt again.

Most recently, scientists at the USGS Hawaiian Volcano Observatory (HVO) were kept up the evening of August 2 and into the early hours of August 3 monitoring Mauna Loa. Over a period of about ten hours, 90 earthquakes were located beneath Mauna Loa’s summit region, and many more earthquakes were detected, but were too small to precisely locate. The total number of earthquakes peaked at over 200 per hour.

As the swarm was happening, HVO scientists were interpreting the incoming data on-the-fly and trying to answer questions such as, “Where are the earthquakes happening? Is the activity migrating? Are there changes in other monitoring datasets?”

The earthquakes occurred around 2 miles (3 km) below the surface of Mauna Loa’s summit and their locations did not shift horizontally or vertically to another region or depth over time. The observation that the earthquakes did not get shallower was a comforting indicator that the swarm was unlikely to be from magma rapidly ascending into an eruption.

Another unique occurrence was the change in another monitoring dataset. As the earthquakes were occurring from August 2–3, a tiltmeter on the north side of Moku‘āweoweo—Mauna Loa’s summit caldera—showed a change of about 1.5 microradians. 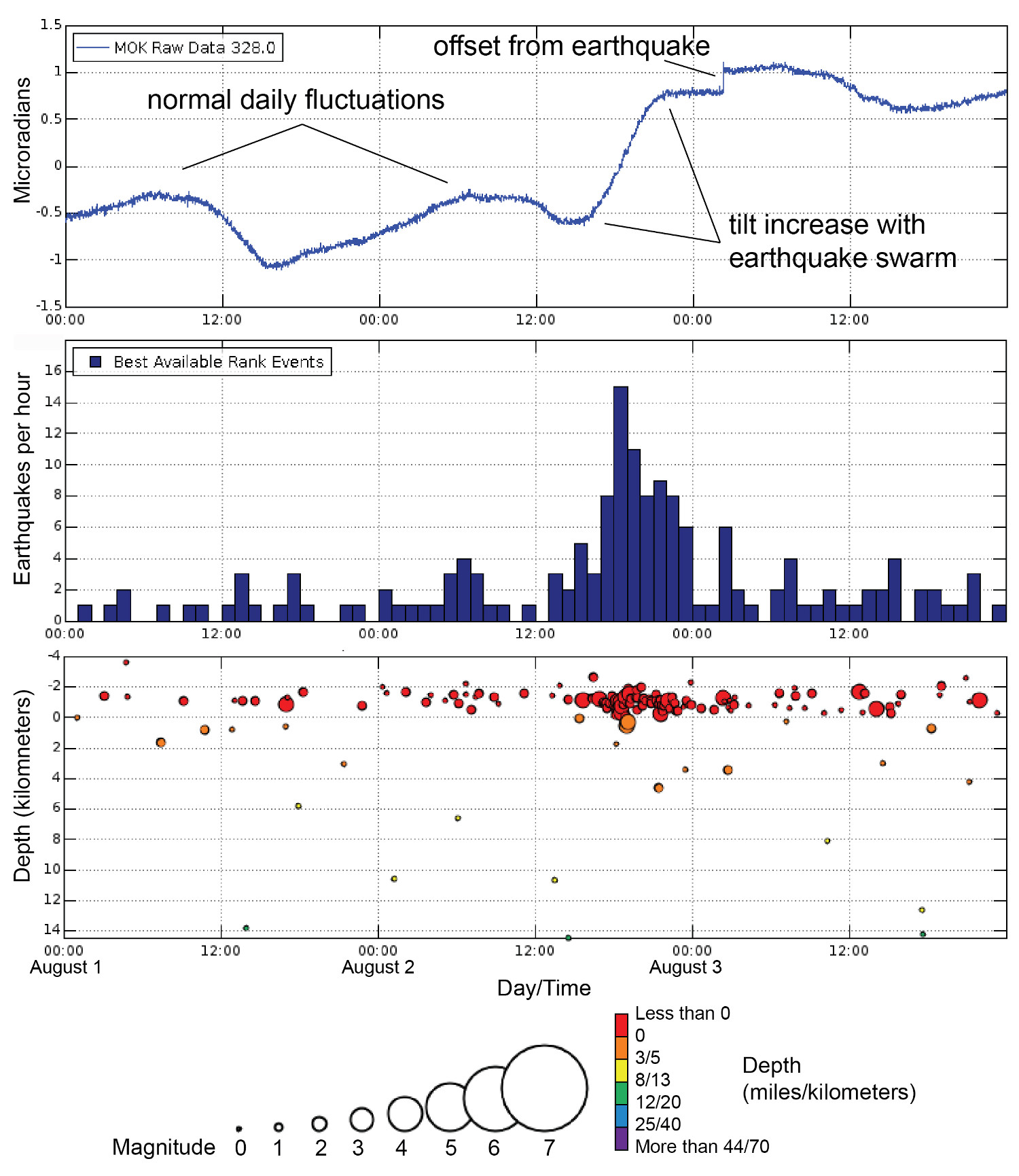 Tiltmeters measure changes in ground slope. The change associated with the earthquake swarm, although small and partly hidden by daily fluctuations resulting from changes in temperature, reflects a tiny expansion or inflation of Mauna Loa.

This is only the second time since electronic tiltmeters were installed in 1999 that a tiltmeter at Mauna Loa’s summit has shown ground movement associated with volcanic activity. The first time was during the Spring 2021 activity, which you can read about in this “Volcano Watch” article.

Mauna Loa’s magma storage system has been slowly recharging for decades and these new observations over the past year and a half have HVO scientists seeking the answer to an additional question, “What do these observations indicate about processes occurring within Mauna Loa?”

The changes observed in ground deformation reinforce an interpretation that shallower processes are occurring on Mauna Loa than we have seen in the past. Ideally, HVO scientists could review ground deformation events prior to previous Mauna Loa eruptions in order to place this recent activity in context. However, prior to 1984, deformation at Mauna Loa’s summit was measured by a team painstakingly surveying relative benchmark positions using Electronic Distance Measurements (EDM). The high-precision, real-time instruments that HVO currently uses to detect such small changes weren’t yet available.

Mauna Loa earthquake activity and ground deformation have returned to previous levels following the August 2–3 event and an eruption is not imminent. HVO continues to keep a close eye on diverse monitoring datasets, which may show other previously unobserved signals as Mauna Loa’s magma chamber continues its slow refill.

It is never too early to consider how a future Mauna Loa eruption could affect you as a resident or visitor. Mauna Loa may be in its longest slumber in at least two centuries but it remains restless, reminding us that it will certainly erupt again in the future.