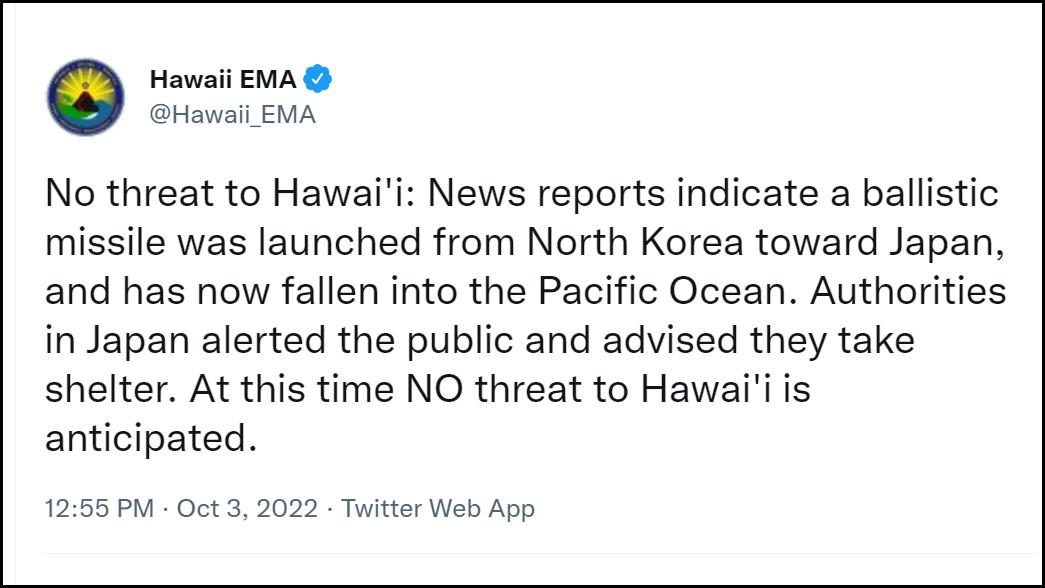 (BIVN) – Emergency officials in Hawaiʻi took to social media on Monday, attempting to keep residents apprised of a North Korean ballistic missile launch that appeared to pose no threat to the islands.

No threat to Hawaiʻi: News reports indicate a ballistic missile was launched from North Korea toward Japan, and has now fallen into the Pacific Ocean. Authorities in Japan alerted the public and advised they take shelter. At this time NO threat to Hawaiʻi is anticipated.

Five minutes later, HI-EMA followed up by saying that “initial reports “indicate the projectile passed over Japan, and that local sources now are indicating it poses “no threat.”

NHK television network is now reporting that Japan’s Coast Guard has confirmed that the projectile has fallen into the ocean. The network is airing a statement about the incident by Hirokazu Matsuno, Japan’s Chief Cabinet Secretary.

Back on January 13, 2018, Hawaiʻi garnered international attention when it mistakenly issued a false “inbound ballistic missile” alert that panicked residents across the state. After an investigation, the Hawaiʻi Emergency Management Agency administrator resigned and the employee that reportedly dispatched the infamous false alert was terminated.