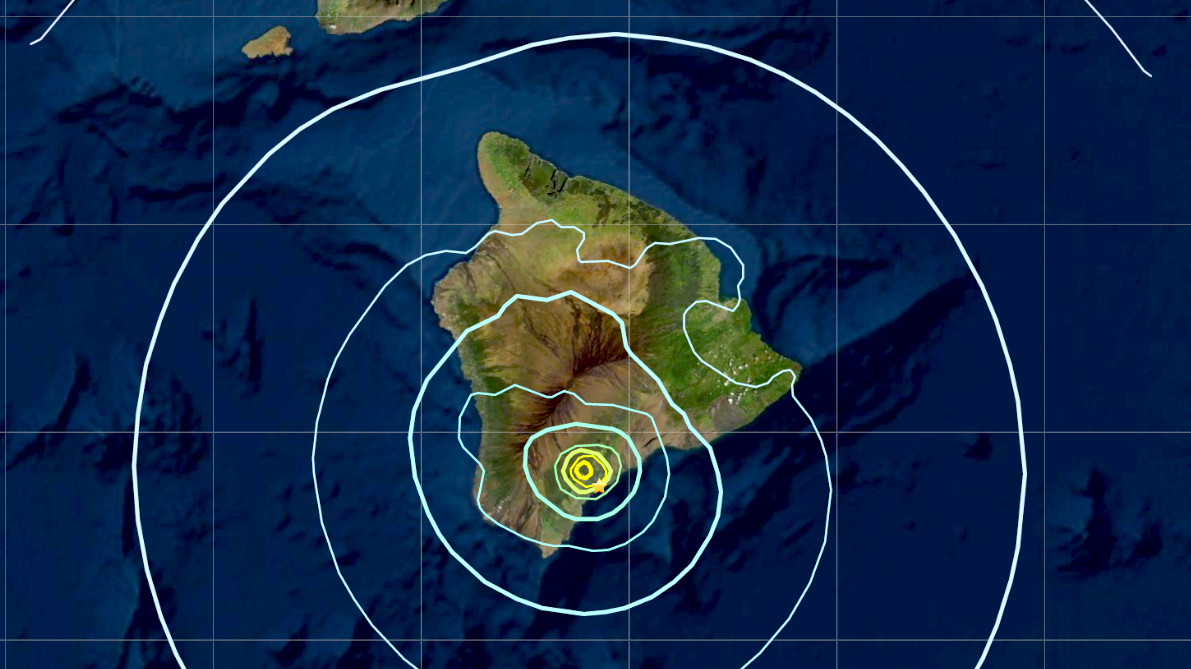 image from USGS interactive map showing the location of the earthquake on October 14, 2022

HAWAIʻI ISLAND - The USGS discusses aftershock forecasts following a large earthquake, like the one that recently rattled the town of Pahala.

USGS: “Plot showing the magnitude and time of earthquakes in the October 2022 Pāhala sequence. The magnitude 5.0 mainshock is shown in blue and the aftershocks with 6.2 miles (10 km) of that event are shown in yellow to red with the color based on their time of occurrence.”

(BIVN) – This week’s Volcano Watch article was written by Andrew Michael, a research geophysicist with the USGS Earthquake Science Center:

After damaging earthquakes, response and recovery takes place under the threat of aftershocks. USGS aftershock forecasts can help you understand what may happen, promoting public safety and an understanding that experiencing aftershocks is normal.

To help people deal with aftershocks, the USGS issues aftershock forecasts for the next day, week, month, and year that provide:

1. the expected number of aftershocks that may be felt (magnitude 3 and 4 or greater)

2. the probability of aftershocks large enough to potentially do damage (magnitude 5 and greater), and

These forecasts are automatically issued after most magnitude 5 and larger earthquakes in the United States and its territories. The first forecast is issued 20 minutes after the mainshock and they are updated 74 more times during the first year. Forecasts are updated regularly because the rate of aftershocks changes with time, generally decreasing, although sometimes temporarily increasing after a larger aftershock. Therefore, the forecasts are updated to keep current with the changing aftershock rate. The updates also incorporate information about the behavior of each aftershock sequence.

In addition to providing basic information about an earthquake and its aftershocks, the USGS reminds everyone to “Drop, Cover, and Hold On” during an earthquake. And remember, if you feel a strong earthquake while at the beach or in a low-lying area, you should immediately move to higher ground—a tsunami wave can come ashore before warning sirens can alert you to the potential danger.

The forecasts can be found on the web by finding the “event page” for the mainshock. For instance, the event page for the October 14 event near Pāhala is at (here) and the aftershock forecast can be found by clicking the “card” labeled “Aftershock Forecast.” The event page also provides estimates of the shaking and damage due to the earthquake, other technical information, and you can contribute your experience during the event. Recent mainshocks will be found in the list of significant earthquakes on the homepage, older ones can be found in the significant earthquakes archives, and all events can be found by using the search tool.

The aftershock forecasts combine three well-studied statistical properties of aftershock sequences: larger mainshocks produce more aftershocks, smaller aftershocks are more common than larger ones, and the rate of aftershocks declines about in proportion to the time that has passed since the mainshock. The initial forecasts use parameters for that region or similar geologic regions around the world. For instance, in Hawaii the initial forecasts use observations from similar oceanic volcanoes around the world. Those parameters are then updated as we observe the specific behavior of each aftershock sequence.

You may have also noticed that the word most (it was in bold italics!) in the description of when we automatically issue aftershock forecasts. The exception to the rule is earthquakes in Hawaii because volcanic earthquake sequences driven by changes in magma movement or eruptions are far more complicated than can be described by the three simple aftershock properties described above. After magnitude 5 or greater earthquakes in Hawaii, the USGS aftershock forecasting team manually triggers the forecasts if the USGS Hawaiian Volcano Observatory scientists conclude that the sequence is likely to be a simple aftershock sequence. For the October 14 earthquake, that process meant that the first forecast wasn’t issued until 3 hours after the magnitude 5 earthquake occurred. But that delay gave us confidence in the forecasts and, so far, they have been accurate.