Images and video courtesy USGS, Hawaii County, and Hawaii DOD. A synthesized voice was utilized in the narration for this story.

HAWAIʻI ISLAND - The lava flow has advanced very little since Wednesday morning, when it was about 1.8 mi (2.9 km) from the Daniel K. Inouye Highway, aka Saddle Road. 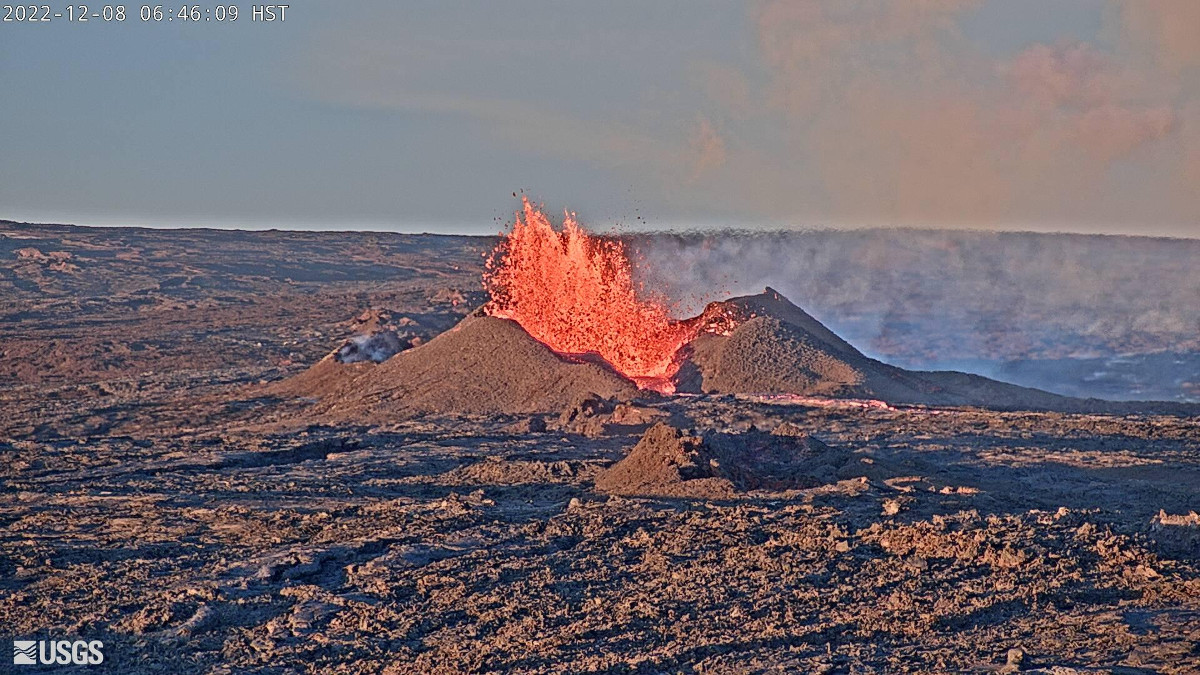 Fissure 3 remains active on the Northeast Rift Zone, sending a channel of lava to the north, down the mountain towards the Saddle area.

The lava that has reached the flat lands has slowed to a crawl over the last few days. The flow front was last measured at about 1.8 miles, or 2.9 kilometers, from the Daniel K. Inouye Highway. 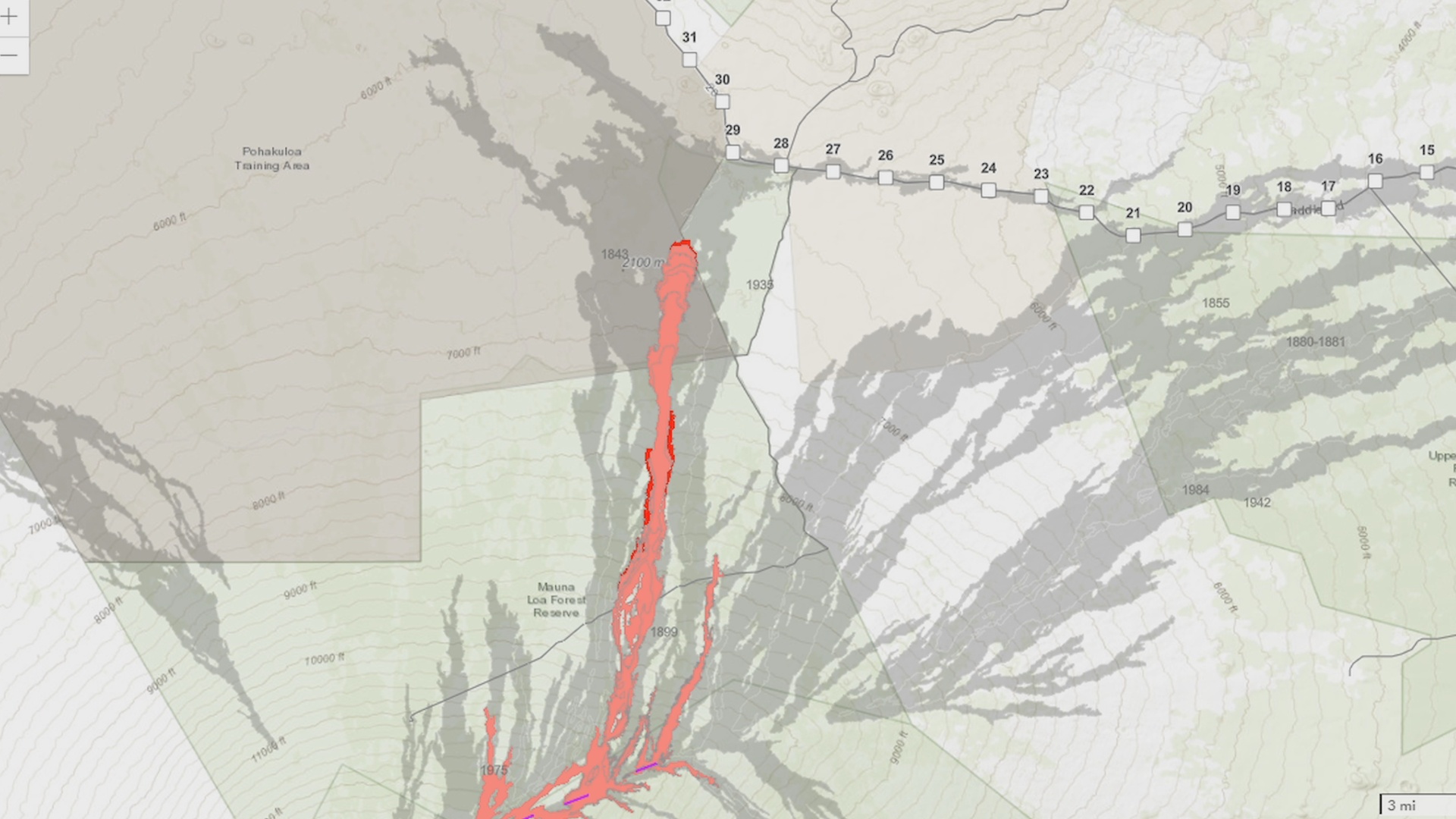 Lava flow map via the County of Hawaiʻi on Wednesday

A significant lava breakout was observed Wednesday, nearly 3 miles back from the tip of the main flow. Scientists think this breakout may be removing lava from the channel, helping to slow the advance of the flow front.

Scientists have been hard at work, above the clouds on the gargantuan volcano, documenting the lava flowing from Fissure 3. The vent is erupting at an elevation of about 11,500 feet (3,510 meters) above sea level. 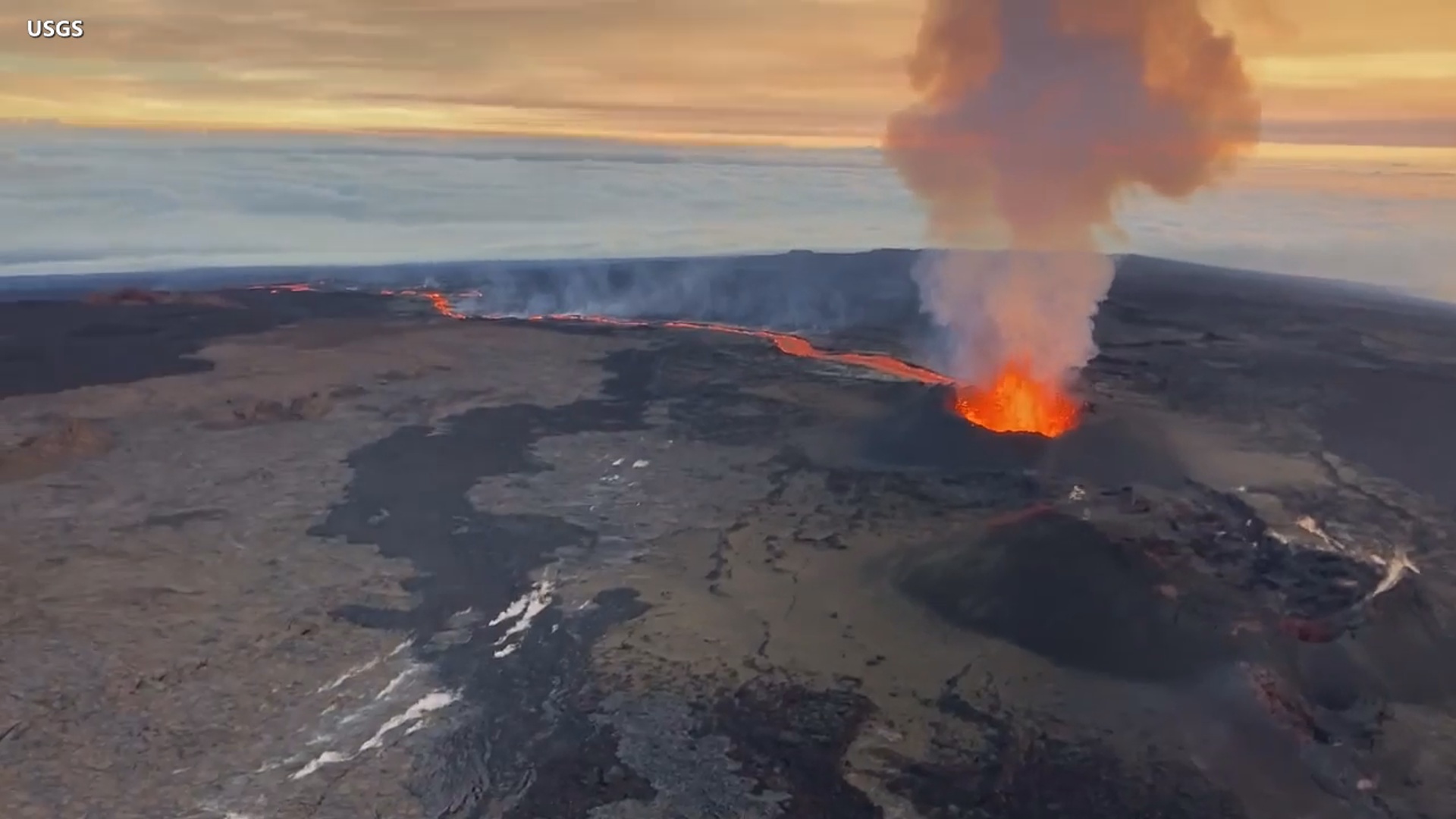 image of Fissure 3 from USGS video

The U.S Geological Survey Hawaiian Volcano Observatory has even established a webcam streaming live video the eruption over YouTube.

The erupted material have already undergone a scientific analysis, revealing that the new lavas are not leftover from the 1984 eruption, but represent a new intrusion of magma into the summit and Northeast Rift Zone. Scientists say this is consistent with geophysical signals leading to the eruption

Near the vent, the lava flow velocity within the channel has been measured at 32 to 39 feet (10 to 12 meters) per second. Farther downslope, where the flow is widening on the flat ground, the front is advancing more slowly at an average rate slower than 20 feet (6 meters) per hour.

Scientists continue to advise that the lava flow advance rates may be highly variable over the coming days. They say it is difficult to estimate when, or even if, the flow will impact the cross-island highway. But for now, the eruption poses no threat to Hawaiʻi island communities.

The Hawaiʻi Army National Guard has been activated and about 20 troops have arrived on the Big Island. Major General Kenneth Hara on Tuesday visited the Hawaiʻi County Civil Defense Emergency Operations Center for an update of conditions on the ground. The servicemembers will work with law enforcement to support traffic control near the Daniel K. Inouye Highway.

Officials continue to ask the public to stay on the old Saddle Road when viewing the eruption, and to refrain from hiking out to the lava flow. The discovery of an unexploded ordinance away from the road on the military grounds on Sunday was another example of the dangers that are present in the area. Officials say violators will be cited or arrested.