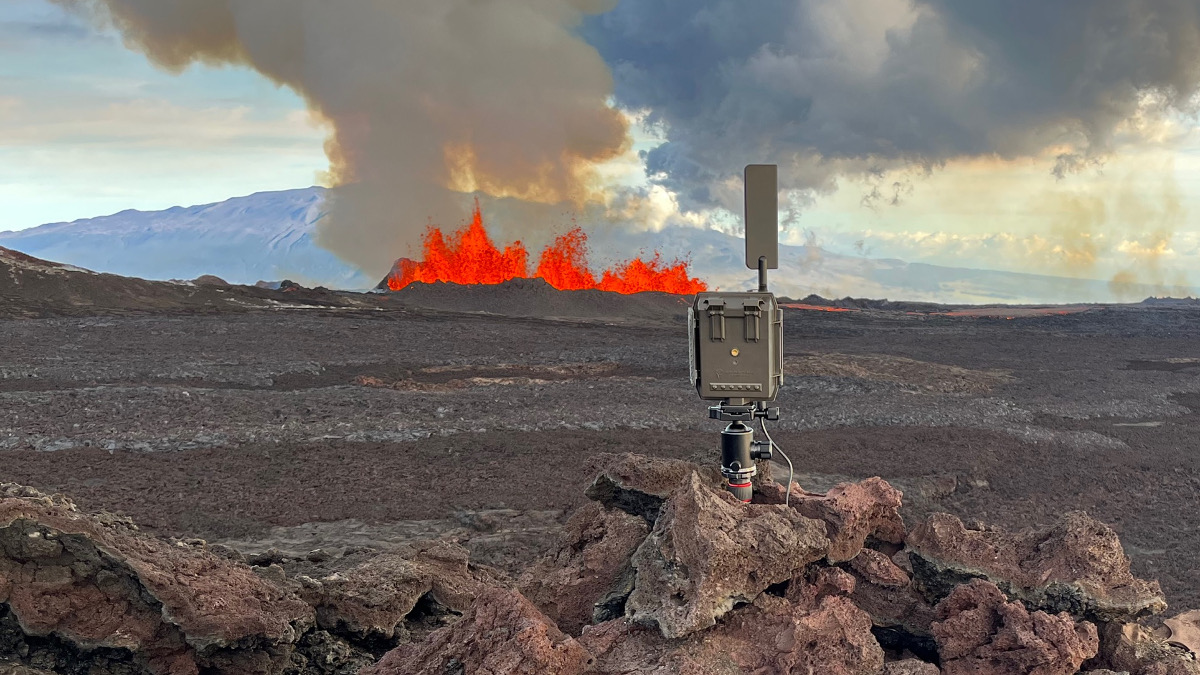 Real-time views of an eruption site are a vital source of information for emergency managers, so webcams are one of the most important tools in an eruption crisis. HVO maintains a network of continuously operating webcams across Mauna Loa and Kīlauea, which have provided views of recent eruptions at these volcanoes.

Kīlauea summit began erupting again the afternoon of January 5, 2023, and webcams provided views of lava reaching the surface. You can monitor this new activity, which is confined to Halema‘uma‘u crater within Hawai‘i Volcanoes National Park, through one of the many Kīlauea summit webcams available.

The recent eruption of Mauna Loa produced spectacular lava fountains and a long, meandering lava flow that threatened a major highway on the Island of Hawai‘i. Given the potential hazard to infrastructure, Hawaiian Volcano Observatory (HVO) scientists needed to keep a close eye on the eruption, around the clock.

HVO geologists were on the ground and in the air each day, monitoring the situation at Mauna Loa closely. They couldn’t be at the mountain-top eruption site all hours of the day but webcams could. The recent eruption of Mauna Loa allowed HVO scientists to test and improve some of our remote camera capabilities.

These webcams proved invaluable during the opening hours of the Mauna Loa eruption, to be able to pinpoint which rift zone the activity was focusing on. HVO scientists used cameras on the Southwest Rift Zone to confirm that vents were not opening on that section of the volcano, which has greater proximity to residential areas.

Once an eruption starts, HVO relies on small, portable webcams to provide close-up 24/7 views of the eruptive activity. These cameras transmit images over the cellular network, and can easily fit in a backpack, so HVO staff deployed them around the new Mauna Loa eruption within hours of its start.

Another tool HVO deployed was a live-streaming video camera, to provide continuous views of the fountaining at the vent. This is valuable to track whether eruptive activity is picking up or slowing down. The eruption site was remote and maintaining a data connection was a major challenge. But it was worth the work and proved to be popular with volcano watchers around the world. HVO learned useful lessons for live-streaming in this environment, which should help with future eruptions.

Several time-lapse cameras were also deployed to provide detailed documentation of the lava fountain heights and lava channel activity. These time-lapse cameras didn’t transmit their images in real time, but simply stored the images onto a data card for later analysis.

Many of these camera techniques were developed and improved during the 2018 eruption of Kīlauea, and lessons learned there were directly applied to the Mauna Loa response. We also tested a new “video-lapse” camera. Unlike time-lapse cameras that take a single snapshot at intervals, the video-lapse camera periodically captures short video clips. In our test deployment, the camera captured a 20 second video clip of the lava flowing through the upper channel every 15 minutes.

These periodic video clips will be useful for measuring the eruption rate through time. Just as the flow rate is one of the most important variables to understand a river’s behavior, the volumetric eruption rate (cubic meters or cubic yards per second) is a fundamental parameter for understanding, and forecasting, lava flows. The simplest way to measure the eruption rate of a lava flow is to estimate the velocity of lava in the channel and multiply that by the depth and width of the channel.

From our video-lapse clips we can make direct measurements of the velocity of lava in the channel. This is done by using a computer to track moving features in a video. In a lava channel, these might be distinct pieces of crust carried on the surface.

In essence, this approach is a digital cousin of “Poohsticks”, whereby Winnie-the-Pooh and his friends tossed sticks into a creek and watched them flow downstream. In the video clips of the lava channel, the algorithm can track many thousands of virtual Poohsticks.

Camera technology improves every year, and the recent Mauna Loa eruption was an opportunity for HVO to test and improve our remote camera monitoring approaches. There’s still no replacement for a geologist’s eyes, but our Mauna Loa response showed that remote field cameras are a valuable complement to field geologists during eruption crises.