November 19, 2010 – KAILUA-KONA, Hawaii A deal that will cement a University of Hawaii presence in North Kona has been inked. In an afternoon press conference held today on Oahu, university officials made the announcement, which is as much of an importance to the sustainability movement in West Hawaii as it is to higher education. That’s because the complex […] 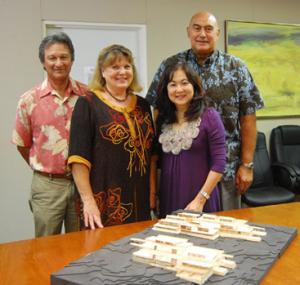 A deal that will cement a University of Hawaii presence in North Kona has been inked.

In an afternoon press conference held today on Oahu, university officials made the announcement, which is as much of an importance to the sustainability movement in West Hawaii as it is to higher education.

That’s because the complex portends to be one of the most “energy-efficient college complexes in the United States when it opens in fall 2012”.

RIGHT PHOTO: Guy Lam, Beth Sanders, Noreen Yamane and Rockne Freitas with a model of the campus, courtesy the University of Hawaii

The university issued the following media release on the heels of the press conference:

HONOLULU – The University of Hawai‘i today signed an agreement that clears the way for construction of the long-awaited Hawai‘i Community College at Palamanui.

Hawai‘i CC at Palamanui will be built on a 78-acre site owned by the University of Hawai‘i, located about a mile north of Kona Airport. It is expected to be the one of the most energy-efficient college complexes in the United States when it opens in fall 2012.

“We are incredibly pleased to have reached this public-private partnership, which allows us to move forward on something that has been talked about for decades,” said UH President M.R.C. Greenwood. “This enlightened approach permits us to bring the best-quality educational opportunity to a part of our state that has been educationally underserved up to now.”

Under the agreement, the university will build a $4.7 million access road to the site, and Palamanui Partners, LLC, developers of the Palamanui community, commit to spending an equal amount toward building the first of two planned phases of the community college project.

“We expect to serve about 700 total students when the first phase is completed,” said Noreen Yamane, interim chancellor of Hawai‘i Community College. “That includes about 200 students who attend by way of our distance-learning capabilities.”

The first phase will include one complete building and a stand-alone portion of a second building, to be extended during phase two. The campus provides some 23,000 square feet of space, and it will include the University of Hawai‘i Center in West Hawai‘i, which will be relocated from its current 12,500-square-foot rented space in Kealakekua.

“We are so excited about the sustainability features being built into this campus,” said Beth Saunders, interim director of the UH Center, West Hawai‘i. “It will have the highest possible ranking from the U.S. Green Building Council.”

The Leadership in Energy Efficiency Design (LEED) Platinum designation means the complex will employ the most advanced technology to conserve resources, according to architect John Ida of Urban Works, Inc.

For example, photovoltaic cells will capture energy from sunlight and vertical access windmills will generate energy from the wind. There will be “waterless toilets,” and the site will feature what architects call a “living machine,” where sewage produced at the complex will be treated on-site, separating water from solids, and allowing water to be reused for landscaping. The treated solids will be pumped and removed from the site.

Greenwood said the university was grateful for the support for the Palamanui Campus that came from Hawai‘i County Mayor Billy Kenoi, Stacy Higa, former chairman of the Hawai‘i County Council and its members, the Hawai‘i State Legislature, including Senators Dwight Takamine and Russell Kokubun, and U.S. Senator Daniel Inouye, who has pledged federal support where possible for the energy-saving elements of the project.

The State of Hawai‘i and the county council have already provided the zoning approvals. The next steps include finishing the campus design and seeking county building permits.

This rendering depicts the future UH Center-West Hawaii, from the draft supplemental EIS