It was a milestone moment for the 79th Recruit Class of the Hawaii County Police Department on Friday, when the group was recognized during ceremonies held at Nani Mau Gardens in Hilo.

Before a room full of friends, family and fellow law enforcement officers, the recruits had their badges pinned after 5 1/2 months of intensive training.

During Friday’s ceremony, class President Peter P. Tourigny said most of the recruits were born and raised on the Big Island but some members traveled from Oahu, Maui and as far as New Hampsiire to be here. Prior to entering the Police Department, he said, the recruits worked as school teachers, retail sales associates, farmers, armored truck drivers, college students, personal trainers, loss prevention agent, police dispatcher, corrections officer, former police officer and amateur dancer.

“I challenge each of you to wear your uniform with pride and remember that we are now held to a higher standard of living,” Tourigny said. “We must serve the community in a way that will never disgrace the honor or our badges.”

The other members of the 79th Recruit Class are:

Next, the recruits will have four months of on-the-job field training with veteran police officers before they are on their own. 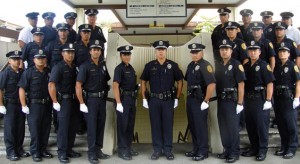