PAHOA, Hawaii: The County of Hawaii issued the following media release in regards to an important meeting tonight in Puna: The Planning Director will introduce her initial draft for amendments to the Land Use Pattern Allocation Guide (LUPAG) map of the Hawai‘i County General Plan affecting the P#257;hoa Regional Town Center area identified in the […]

PAHOA, Hawaii: The County of Hawaii issued the following media release in regards to an important meeting tonight in Puna:

The Planning Director will introduce her initial draft for amendments to the Land Use Pattern Allocation Guide (LUPAG) map of the Hawai‘i County General Plan affecting the P#257;hoa Regional Town Center area identified in the Puna Community Development Plan at a public meeting at the Pahoa Neighborhood Center on Wednesday, August 31, 2011 from 6:00 to 7:30 pm.

The purpose of this meeting is to introduce the P#257;hoa community to the Director’s proposed amendments to the LUPAG designations, which are intended to support the Puna CDP concept of Pahoa as a regional town center. Following a presentation by Planning Director, Bobby Jean Leithead Todd, the public will be afforded an opportunity to ask questions and offer comments on the proposed amendments.

The General Plan LUPAG map for Pāhoa has not been updated since the Puna Community Development Plan was adopted in 2008 and amended in 2010. This LUPAG Map amendment would support the Puna CDP concept of developing Pāhoa as a regional town center by providing land area for higher‐density urban uses in the town center and directing commercial and industrial uses away from the Pāhoa Bypass. According to the U.S. Census, the population of the Puna District has grown by 44.6% to 45,326 between 2000 and 2010. Amending the LUPAG Map designations will facilitate rezoning of appropriate properties in Pāhoa town so that businesses can be established that provide additional goods and services to the surrounding population.

To achieve this goal, this amendment reduces the area of land designated Urban Expansion and Low Density Urban and expands the area of land designated Medium Density Urban. Specifically, the Medium Density Urban designation will be expanded north along Pāhoa Village Road to include Malama Market and Woodland Center, which will allow the growth of businesses and multiple‐family residences along Pāhoa’s main road and in close proximity to other infrastructure such as County water (see A‐2, A‐4). In order to maintain the function of the Pāhoa Bypass as a State roadway intended to carry high volumes of vehicles at relatively high speeds around Pāhoa Village, direct access to the Bypass for commercial and industrial land uses should be limited. Therefore, the Urban Expansion Area designation along the Bypass will be changed to Extensive Agriculture and Low Density Urban (see A‐1, A‐3). Lastly, every community requires areas for industrial uses such as auto and truck storage facilities, contractor’s yards and warehousing. Urban Expansion designated areas will be provided southwest of town along Apaa Street to accommodate these uses (see A‐5). This is consistent with Section 5.2.4 of the CDP, which indicates the area generally mauka of Malama Market
should be developed with industrial uses.

A description of each LUPAG Map designation and corresponding zoning districts that are typically found within these designations follows:

The Low Density Urban designation includes residential uses (with a density of up to 6 units per acre) with ancillary community and public uses, and neighborhood convenience‐type commercial uses. [RS, RD, O, limited CN or CV]

The Urban Expansion Area designation allows for a mix of high density, medium density, low density, industrial, industrial‐commercial and/or open designations in areas where new settlements may be desirable, but where the specific settlement pattern and mix of uses have not yet been determined. [RS, RD, RM, RCX, CN, CV, MCX, ML, MG, PD, O]

The Extensive Agriculture designation includes lands that are not classified as Important Agricultural Land, and that are not capable of producing sustained, high agricultural yields without the intensive application of modern farming methods and technologies due to certain physical constraints such as soil composition, slope, machine tillability and climate. Other less intensive agricultural uses such as grazing and pasture may be included in the Extensive Agriculture category. [A, FA, IA, O] 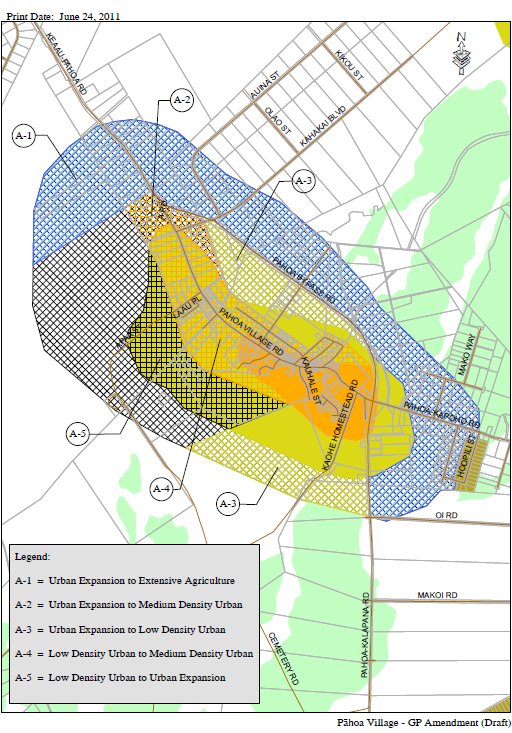