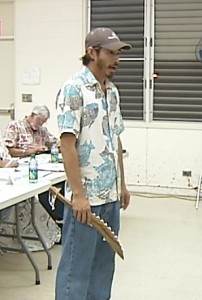 HONOLII, Hawaii: Big Island police have arrested a man wanted in connection with a stabbing incident near Honoliʻi Beach Park.

Glendon brandished this shark tooth Hawaiian weapon, as he asked the commission to play music on a portable player while he moved to the rhythm for the duration of his allotted time.

At 11 a.m. on Monday, October 17th, South Hilo patrol officers responded to a call for assistance and discovered that a 29-year-old Hilo man had sustained two injuries to his lower back in an altercation with an acquaintance on Kahoa Road fronting the Honoliʻi lookout area. Before police arrived, the injured man had been taken by private vehicle to Hilo Medical Center for treatment of his wounds, which don’t appear to be life threatening. He remains at the hospital in stable condition.

On Monday evening, police said they had not recovered the weapon used in the incident. Big Island Video news has not been able to confirm wether or not that weapon may have been the one seen in Pahoa last week…

Police ask than any witnesses to the altercation or anyone with information on Glendon’s whereabouts call Detective Reed Mahuna at 961-2384 or the Police Department’s non-emergency line at 935-3311.